Brexit uncertainty continues to persist, particularly in light of the recent UK High Court ruling that might require the UK Parliament to approve the terms on which the UK leaves the European Union (EU). Such a requirement could delay the start of Article 50 negotiations, and further prolong economic uncertainty.

Brexit implies potential radical changes in the UK’s relationship with developing countries. The resulting changes in UK trade policy – both in general, and with respect to developing countries – may have profound effects. Despite some investment and trade decisions being taken now, changes will not occur until the UK is effectively out of the EU, and the policy effects will take even longer to appear. In fact, trade policy is unlikely to differ substantially in the short run after leaving the EU.

The UK’s trade deals are an important way to influence some developing countries in the longer term. As the UK progresses in its new trade negotiations, it must define a new trade policy towards developing countries. This may include continuing its preference scheme for LDCs, and should aim to build a developmentally friendly trade policy that champions the provision of aid for trade.

Trade impacts of a lower sterling

Since the Brexit vote on 23 June, the UK economy has fared better than expected; preliminary Office for National Statistics (ONS) estimates reveal a 0.5% expansion in the third quarter. However, since the vote, the pound has lost 15% of its value as of 7 November.1 This depreciation has already started to boost domestic inflation, given that it is making imports more expensive. There has also been a rise in the value of imports since the vote led to a decrease in the value of the pound (see Figure 1). The volume of imports dropped after the referendum, but has since recovered. 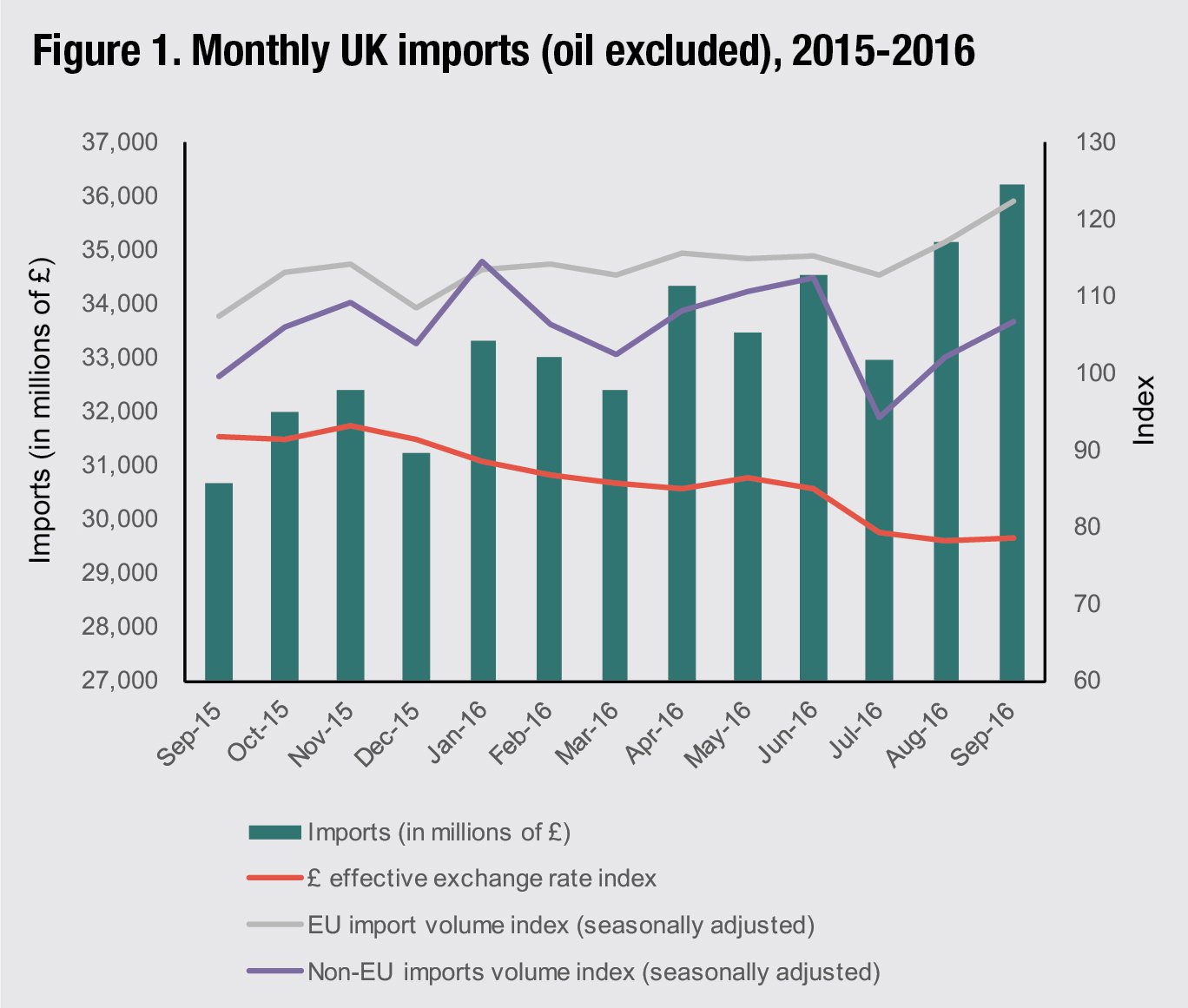 It is necessary to be cautious about the long-term impact of Brexit on both the UK and LDCs in particular for two reasons. First, it is too soon to see the effect of the currency depreciation in the data. Second, these figures denote aggregate imports; it is unclear how the vote has affected imports from specific developing economy partners. However, some available data splits suggest that the volume of imports from non-EU partners fell by 8.5% in the three months after the referendum, while EU import volume growth has clipped higher. Regardless of the short-run resilience of UK trade, the depreciation of the pound will likely have negative effects on the export income of developing countries.

The most enduring effects of Brexit will depend on what trade policies the UK adopts. So far, almost nothing has been announced about whether the UK will maintain its existing preferences towards developing countries. It should consider continuing the ‘Everything But Arms’ preference scheme for LDCs, but should also take the opportunity to redesign its trade policy to include additional development elements and continue championing the provision of aid for trade.

The UK’s new trade policy will need to include the negotiation of free trade agreements (FTAs). In addition, many non-LDCs will want to retain their access to the UK, which can be achieved through FTAs that replace the existing Economic Partnership Agreements. However, the UK should be sure that the FTAs it negotiates with any third parties have minimum effects on LDCs and/or include development provisions (for example, rules of origin that allow cumulation with LDCs). The potential FTA with India, despite the political sensitivities associated with it,2 may introduce additional competition to many other developing countries that needs to be evaluated and addressed.