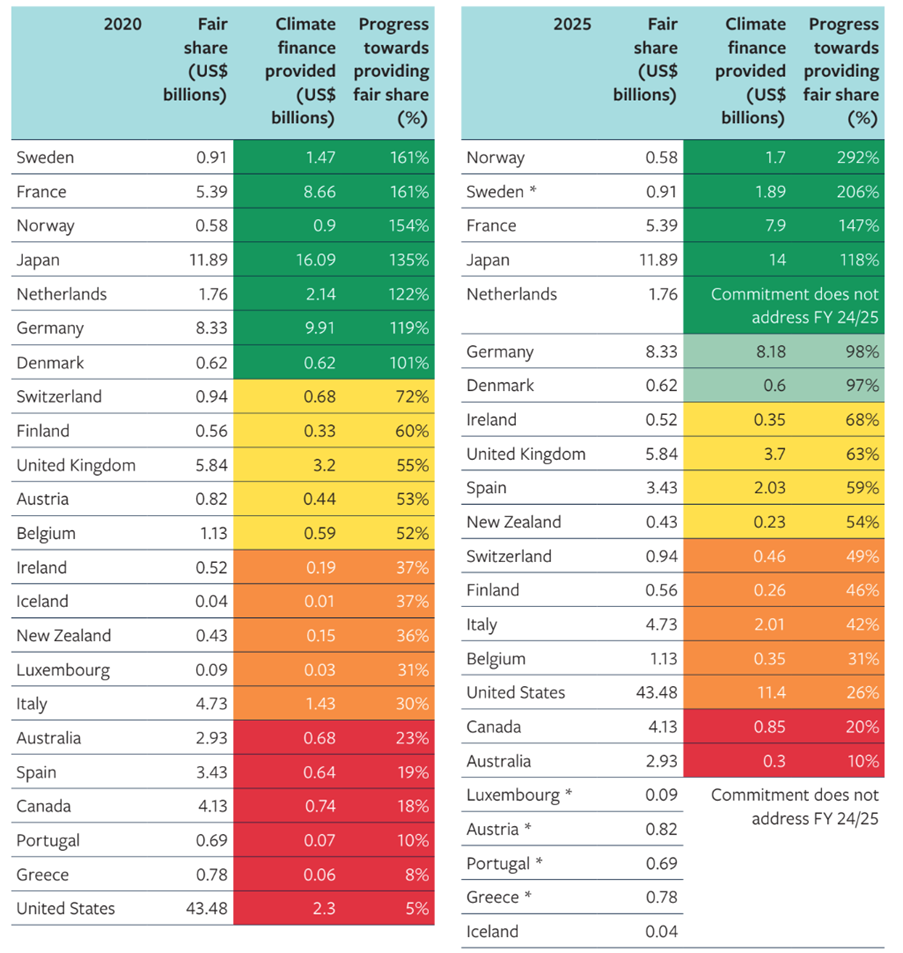 In the lead-up to COP26, we published a pioneering working paper apportioning responsibility for the $100 billion climate finance goal among developed countries.

In this report, we apply our methodology to new data on countries’ climate finance contributions in 2020 and their commitments to 2025. We further assess which additional countries should be providing climate finance going forward.

We find that Australia, Canada and the US continue to fall massively short on international climate finance. The US is overwhelmingly responsible for the climate finance gap having provided just 5% of its fair share in 2020. Although its economy is 40% larger than the European Union’s, it provided only one-twelfth as much climate finance. Australia and Canada provided just 23% and 18% of their fair share respectively, and neither has committed to deliver much more by 2025.

Only seven rich countries provided and mobilised their fair share in 2020 and pledged the full amount up to 2025: Sweden, France, Norway, Japan, the Netherlands, Germany and Denmark. However, France and Japan stand out for the relatively poor quality of their climate finance. A very high share of their resources are provided bilaterally and as loans, with only a small fraction going to climate change adaptation.

There is a clear case for Israel, Qatar and Singapore to start contributing climate finance as they all have higher incomes and cumulative emissions per person than at least five of the countries who are expected to provide climate finance under the UN climate convention. Brunei, Kuwait, South Korea and the United Arab Emirates also exceed at least three established donors on both criteria. Strikingly, China does not qualify under our criteria.

This report is generously funded by the Zurich Flood Resilience Alliance, a multisectoral partnership that brings together community programmes, new research, shared knowledge and evidence-based influencing to build community flood resilience in developed and developing countries.