This year, refugees and migrants have not only faced unprecedented levels of displacement, but also a rise in deaths in transit, restrictive asylum policies, and increased xenophobia, racism and negativity.

In this context, we published a report in September analysing the costs of European governments’ efforts to deter migration and the different routes that refugees and migrants take, including the scale of potential ‘covert’ migration to Europe.

Three months on, what does the latest data mean for our analysis and projections – and what other trends are emerging?

Our report detailed that Europe spent at least €17 billion since 2014 on deterring refugees and migrants, through tighter border controls and bilateral agreements such as the EU-Turkey deal.

These measures were effective in reducing migration in terms of overall flows, most notably to Turkey and Greece.

But we also projected that Europe would still receive close to a million asylum applications in 2016. Of these, only 330,000 refugees and migrants would be likely to arrive via the Mediterranean, with over half a million arriving through more covert routes that we know very little about.

So what does the latest data reveal?

1. There were fewer arrivals through covert routes than projected

Asylum applications actually slowed in the last three months of 2016 and show no signs of a strong seasonal rise in numbers (the norm in previous years). We revised our estimates and now predict that Europe will see just under half a million people coming through covert routes.

Cumulative arrivals in Europe, as a share of asylum applications

Note: calculations use actual arrivals in Germany rather than asylum claims due to the backlog from 2015. Data includes both actual and projected arrivals. Total overt arrivals for 2016 estimated at 370,670. Total covert arrivals estimated at 467,852.

Despite the reduction, this is still a large number of people arriving through unpredictable and less known routes. Our analysis still stands: Europe’s narrow, often expensive, deterrence policies are unlikely to stop people arriving and applying for asylum in Europe.

A much more effective approach would be to facilitate and increase legal pathways so that governments can monitor and more effectively manage flows of refugees and migrants.

In October, UNHCR reported that 2016 was on track to become the deadliest year on record for those crossing the Mediterranean. As of 14 December, 4,831 people had died, well above the 2015 total of 3,771 – and that’s with fewer people overall attempting to enter to Europe.

The likelihood of dying en route is now substantially higher than last year. While deterrence measures, such as militarised search and rescue, may have reduced the number of people crossing the Mediterranean, they haven’t stopped smugglers taking more reckless approaches or people using more dangerous routes. This has rapidly increased the death rate among those trying to reach Europe. 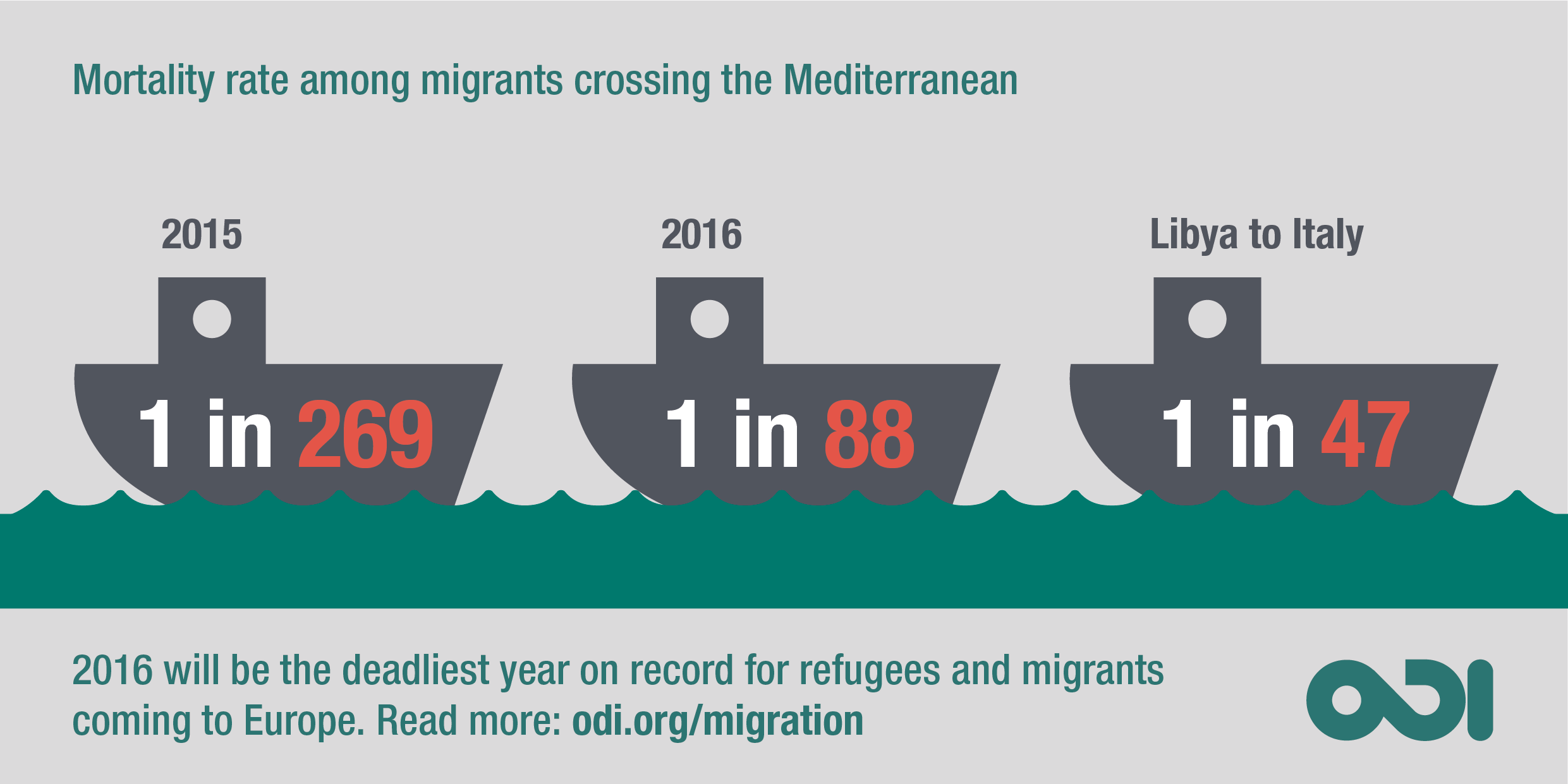 3. Italy now the top destination for refugees and migrants

The EU-Turkey deal, combined with restrictive deterrence policies, has made the route through Turkey and Greece more difficult. This may have led to flows being diverted towards the Italian route. In 2016, more asylum seekers reached Italy by boat than in any previous year on record.

Given this strong upward trend, Italy is now the top destination for refugees and migrants, outstripping Greece, Spain, and other European destinations. 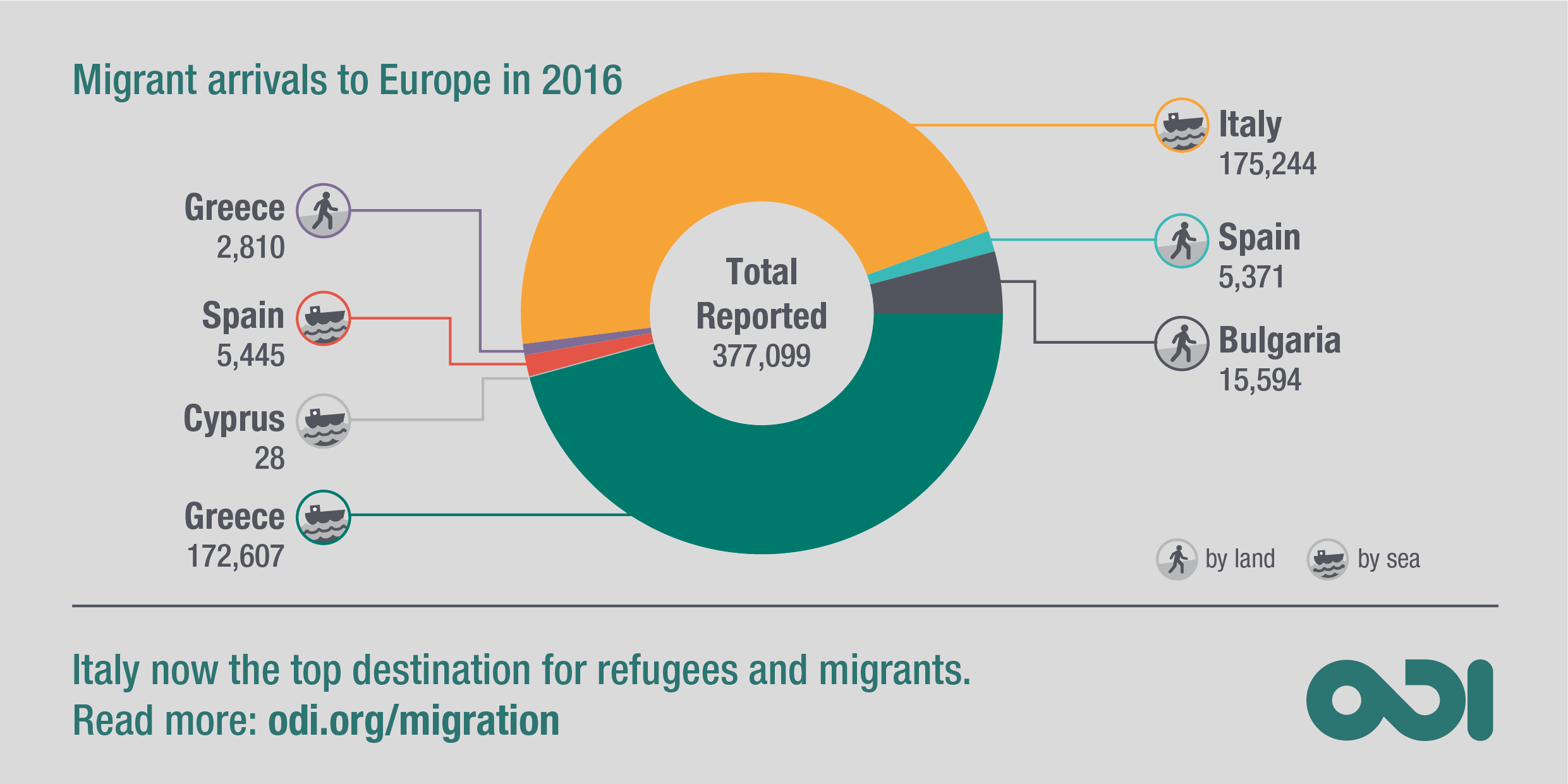 Source: Data for Italy and Greece from UNHCR. Rest from IOM.

Enhanced border controls between Italy and neighbouring countries also means that many more refugees and migrants will be stuck in Italy with limited options and opportunities for livelihoods and jobs.

Other EU countries have little interest in supporting Italy in this endeavour. They have already isolated Greece in its effort to address the urgent needs of the many refugees and migrants currently stuck there, as well as the local population which is struggling to cope with even greater pressures on services.

Our data and analysis confirms what many others working in this sector have been suggesting for some time now: that Europe’s restrictive policies and tightened borders do not deter overall migration but instead merely divert flows.

The lack of legal options for refugees and migrants make it harder, not easier, for governments to monitor flows and design suitable policies to better manage human mobility.

European governments are making bad policy choices when it comes to migration. Not only for refugees and migrants who are dying at sea and suffering from perfectly avoidable political decisions, but also for their own citizens, who are understandably worried about the lack of control and management of migration flows, resulting in equally avoidable fear and mistrust.

This can be corrected, but it needs urgent attention. In the new year, here at ODI, we will focus on better understanding how access to better employment and livelihoods can support the economic and social integration of refugees and migrants, and how this works in practice in different countries.

It is also increasingly important to reframe the migration narrative and understand how to shift public perceptions. ODI’s upcoming projects will weave research, communications and public engagement to address these ongoing challenges and, hopefully, to make 2017 a more positive and constructive year.

This blog relies on a number of data sources. To determine the number of refugees and migrants travelling on particular routes, we used data from UNHCR and IOM. To analyse asylum applications and decisions, we worked from Eurostat information and information from the German Ministry of the Interior. All data was collected and analysed by John Cosgrave.

Thanks to John Cosgrave who provided data and analysis for this blog.