Together, the manifestos of the UK’s four main parliamentary parties (Conservative, SNP, Labour, Liberal Democrats) run to almost 350 pages of text, most of which understandably focuses on domestic priorities and commitments. This focus is also reflected in media and public debates, analysis and interviews.

However, the manifestos do carve out some space for the parties to outline their international priorities, and while this won’t get much coverage during the election campaign, each offer a very distinct vision of Britain’s role in the world. 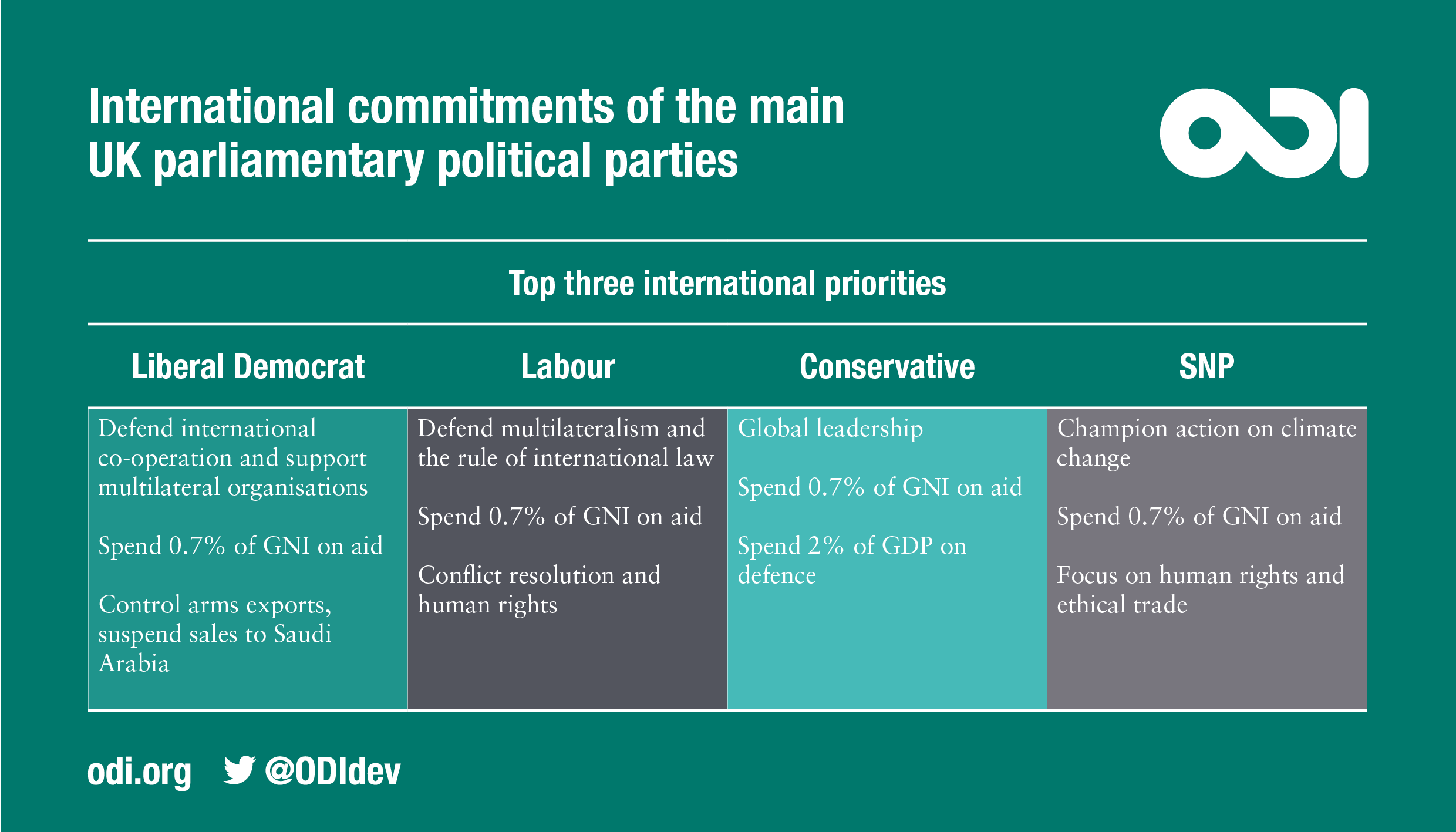 Explore this table in full detail

All four parties commit to maintaining the target of spending 0.7% of national income (GNI) on aid. But that is where the consensus begins and ends. While the Liberal Democrats and the SNP confirmed they will spend aid in line with the Organisation for Economic Co-operation and Development's (OECD) definition and rules, Labour didn’t mention these rules and the Conservatives said they will seek to change them, either through the OECD or on their own.

The commitment to aid spending has been widely welcomed, but the sector has raised concerns about revisions to the rules, especially if they are pursued unilaterally. Only the SNP mentions maintaining the status of the Department for International Development (DFID) as a stand-alone department with a Secretary of State, and none of the parties outline their approach to aid transparency or aid spending by other government departments.

On their thematic priorities, all parties have signalled their support – to varying degrees – for the Sustainable Development Goals (SDGs). The Conservatives will ‘align’ their budget with the global goals, Liberal Democrats will conduct SDG audits of trade and investment deals, Labour will publish a cross-party strategy and report on progress annually, and the SNP will focus aid spending and development policy on meeting the goals at home and overseas.

More broadly, the parties focus on a different set of development policies and issues. Both Labour and the Liberal Democrats mention tax as a key topic and the Conservatives focus on tackling modern slavery, which is expected given the Prime Minister’s interest in this issue. Interestingly, the Conservatives, Liberal Democrats and Labour all commit to investing in global health research, and the SNP has a focus on ethical trade and the rights of women and girls.

The Liberal Democrats also commit to developing a global education strategy, Labour will establish a centre for universal health coverage, the Conservatives will lead global efforts to tackle sexual violence in conflict, and the SNP will focus on human rights across their development policy.

Encouragingly, three of the four parties specifically affirm their commitment to the Paris climate change agreement and its targets, but they differ on how this should be achieved.

The Liberal Democrats will meet legally binding targets to cut net greenhouse gas emissions by 80% by 2040 and reach zero emissions by 2050, and will pass five new green laws. Labour will meet Climate Change Act targets and support developing countries in managing the impacts of climate change. The Conservatives will reduce emissions by 80% by 2050 while continuing their support to the oil and gas industry. The SNP is very focused on highlighting Scotland’s achievements and their ambition to lead the world in tackling climate change.

None of the manifestos mention fossil fuel subsidies.

All parties recognise trade as a critical issue, but we again see different approaches. The Conservatives dedicate a whole chapter to international trade with a big focus on championing free trade. This includes a commitment to introduce a Trade Bill and appoint nine new trade commissioners. The Liberal Democrats commit to high safety, environmental and animal welfare standards in all future trade deals. The SNP go further, committing to a human rights audit of all trade, investment and business deals, and ensuring all trade agreements prioritise poverty reduction.

Labour is the only party to specifically mention trade with Least Developed Countries (LDCs), committing to guarantee their access to UK markets. They also pledge to publish a white paper on international trade and support an environmental goods agreement at the World Trade Organization (WTO).

Looking at refugees and migration across the manifestos, we again see very different approaches from the parties in terms of both principles and plans. The Conservatives will offer asylum to refugees in regions and countries affected by conflict, rather than those who make it to the UK. They will also seek to review international definitions of asylum and refugee status.

The SNP, Liberal Democrats and Labour commit to meeting international obligations, with Labour committing to publish a cross-government strategy and the Liberal Democrats confirming they will offer sanctuary to 50,000 Syrian refugees and 3,000 unaccompanied children by 2022. The SNP will also reopen the Dubs scheme and seek reform of the Dublin regulations.

On broader migration, the difference could not be starker. Labour, the SNP and the Liberal Democrats commit to making a positive case for immigration and the vital contribution migrants make to the UK and don’t offer an overall target figure, while the Conservatives reaffirm their commitment to control and reduce net migration to the tens of thousands.

Labour, the Conservatives and the Liberal Democrats are united in their commitment to spend 2% of UK GDP on defence, but this target is not mentioned by the SNP. On foreign policy objectives, the Conservatives outline a set of top-line principles, such as reform of multilateral institutions and support for a rules-based international order, while the other parties have more specific commitments.

The Liberal Democrats will seek new ways to end the Syrian conflict, while also committing to secure parliamentary backing for any military intervention. Labour will focus on non-intervention, conflict prevention and the appointment of a Minister for Peace and Disarmament. The SNP, along with the Liberal Democrats and Labour, will also seek a resolution to the conflict in Yemen.

The SNP, Liberal Democrats and Labour all agree on stronger arms export control, immediately suspending arms sales to Saudi Arabia, and the pursuit of a two-state solution for Israel and Palestine.

Interestingly, the US is the only country mentioned in the Conservative manifesto (noted as a ‘special friend’), while Labour and the Liberal Democrats specifically refer to President Trump as a threat. The SNP, Labour and the Liberal Democrats also make specific mention of other regions and countries, such as Syria, Iran, Saudi Arabia, Yemen, Israel, Palestine and Russia.

So overall, while there is consensus and convergence on some global issues and priorities, the four parliamentary parties articulate very different approaches, principles and plans to guide Britain’s international engagement.

If you would like to hear directly from the parties on their international priorities, you can view our General Election debate co-hosted with Bond here.