Image license:"Flu Vaccination Grippe" by Daniel Paquet is licensed under CC BY 2.0

This week the Organisation for Economic Co-operation and Development (OECD) has published the preliminary data for 2020 on Official Development Assistance (ODA). The release echoes findings from our recent research that shows ODA flows holding up better than some had initially feared early last year when DAC members committed not to increase, but to ‘striv[e] to protect ODA budgets’. In 2020, estimated ODA flows from the members of the Development Assistance Committee (DAC) to low and middle income countries totalled $161.2 billion, from $152.8 billion in the previous year.

While this week’s press release of the ODA figures trumpeted ‘record levels’ of assistance, it is a signal of just how far expectations of ODA have fallen that this is being perceived as a relative success story. When compared to the fiscal measures taken by national governments to provide domestic relief during the crisis, it’s a drop in the ocean. The increase in ODA flows over the past 12 months across all DAC members has been $8.4 billion, equivalent to one twentieth of a percentage point (0.05%) of the $16 trillion (that is a mind-boggling $16,000,000,000,000) of fiscal measures taken by national governments to address the pandemic. A growing share of ODA flows are also loans, to be repaid in the future.

The need for international public finance in global vaccination

The muted enthusiasm for development assistance has been evident in the limited financial support to date for global vaccination efforts. Throughout 2020 and 2021, pledges to purchase vaccines through COVAX have totalled $8.6 billion. To put that in perspective, as at the end of 2020, the UK government had already spent £12 billion on the vaccination programme for the UK population alone.

It is difficult to think of a cause where there has ever been clearer need for international public finance than in ‘mass vaccination of the world’. At a global level, the benefits of containment of Covid-19 clearly outweigh the costs. It becomes clearer with each mutation of the virus that ‘nobody is safe until we are all safe’. Once supply constraints of vaccines ease, benefits for both the global common good and national self-interest will be clearly aligned.

However, the highly uneven distribution of resources across nations means that not all individual governments will necessarily be able to pick up the bill of mass vaccination of population. Two shots of a $4 vaccine (before costs of roll-out are considered) is a lot of money in low-income countries where average per capita annual current health spending is $36. Much of the finance that has been made available to combat the crisis has come in the form of emergency loans (via the International Monetary Fund, IMF), or freezing debt repayments. Yet the sustained containment and control of Covid-19 will require a redistribution of resources across nations and not just a temporary line of credit.

Rolling out vaccination programmes across populations is also much more complicated than simply buying a lot of vaccines. Administering national large vaccination programmes calls upon state capability and complex systems: it cannot be outsourced to a management consultancy. Again these can potentially be supported through ODA-funded investment in systems strengthening and building bureaucratic capabilities.

The crisis and the limitations of ODA

Yet the crisis has also revealed the limitations of ODA. The first and most obvious constraint relates to long-standing limits to the political appetite for substantially increasing the overall volume of ODA. This has meant that in recent years, attention has often shifted to identifying ways to increase leverage of a pot of money that is barely growing.

Second, the crisis has also highlighted the relative rigidity of ODA budgets. Development is a long-term endeavour. As such development agencies make long-term financial commitments that provide predictability to recipient spending agencies. Yet too much predictability can also mean insufficient flexibility. Given estimates of the enormous benefits to vaccination programmes, it is hard to understand why so many DAC donors have committed less than 3% of their budgets to the signature multilateral initiative to support global vaccine access. 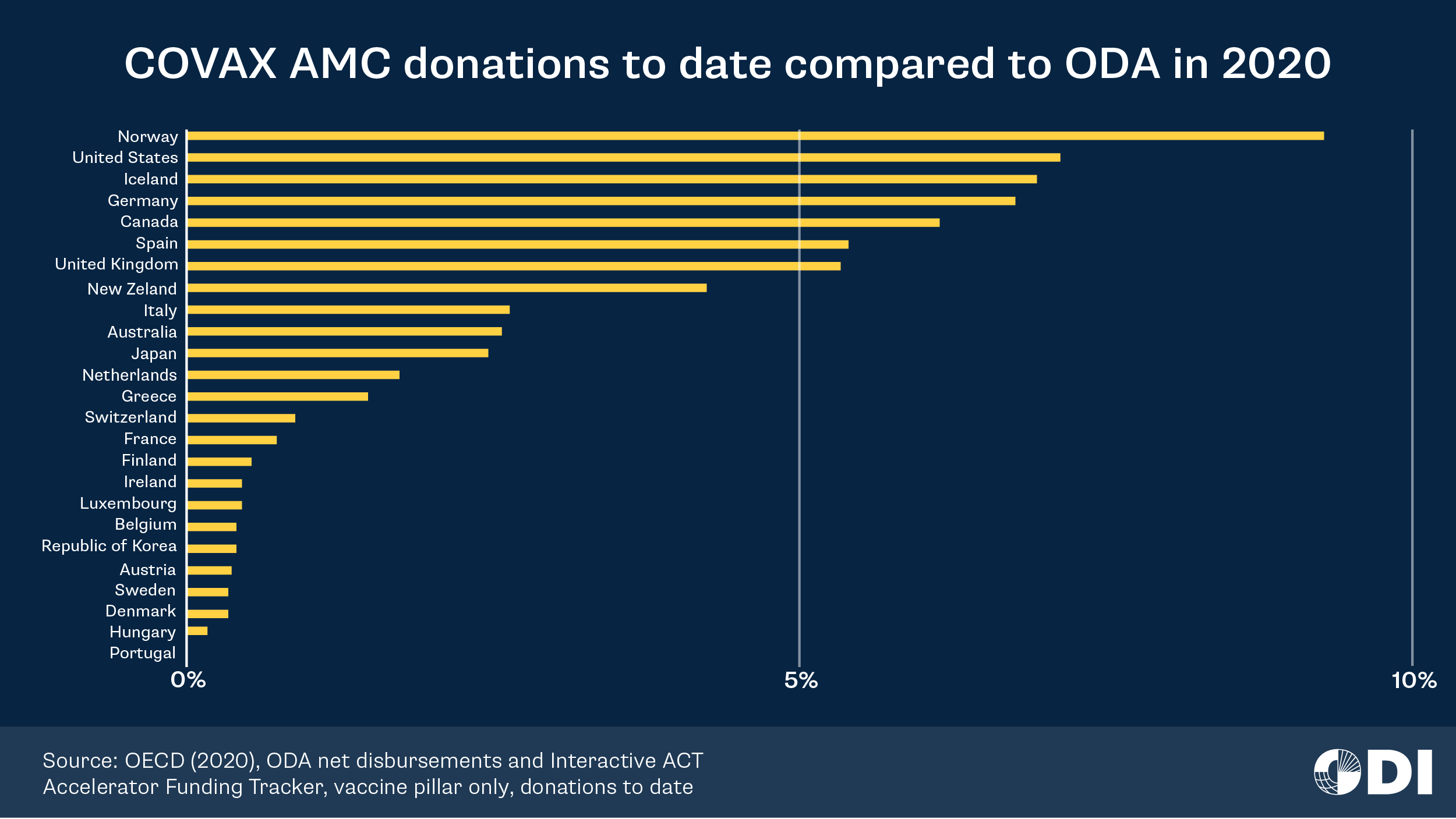 A third issue relates to the association of ODA with a paternalistic act of charity rather than supporting development of self-reliance. Governments in the Global South are notably not advocating for increased ODA to pay for vaccines. Instead, there is growing momentum behind calls for better access to the know-how and technology that would enable investments in domestic vaccination programmes. Governments are looking for more equitable production, not just equitable distribution. This is a critical issue. The large COVAX’s reliance on the supply of the AstraZeneca vaccine manufactured by the Serum Institute in India and the ban on export vaccines by the Indian government is slowing down if not halting the roll-out of the vaccination programmes under COVAX.

Moving from business as usual to reinvigorate multilaterism

The proposals put forward this week by Gordon Brown on how the G7 could take the lead in ‘vaccinating the world’ offer the possibility of reinvigorating multilateralism and international financing commitments. Metrics and numbers reported by the OECD on ODA are obviously important, but so too are a common purpose and unifying narrative for international public finance. There is no better candidate for a collective mission than committing to do all that it takes to accelerate mass global vaccination.

Three departures from ‘business as usual’ on ODA will be needed if international public finance is to play a greater role in global vaccination.

1) First of all and most important there is a need to increase the volume of financial commitments counter-cyclically in just the same way that national budgets have expanded. Delaying necessary investments in global vaccination are not just morally problematic, but also bad economics. The costs of rebuilding later will be so much greater.

2) Second, development agencies could ask themselves harder questions as to whether they are doing enough to prioritise vaccine purchases. Investing in vaccines is not just a health investment (lowering treatment and care costs for systems already under strain), it is an investment in education (so schools can predictability stay open), in preventing poverty that arises from lock-downs, in promoting growth and reintegration with the global economy.

It is a matter of sequencing: large-scale vaccination programmes are a condition to unlock the economy and restore global travel and trade. Prioritising spend on vaccines may be an unpopular message as would require reducing other parts of the ODA budget. But an even worse outcomes is if donors avoid difficult decisions over trade-offs by hiding behind narratives around how aid could reach the highest ‘leverage’ of resources and benefits, especially from the private sector. Resolving a problem of global vaccination should also not come at the cost of another problem of increased pressure on public debt sustainability.

3) Third, international public finance needs to be used not just to address inequities in the distribution of a resource, but also in its production. This requires that international public capital flows to countries not just on the basis of income and the ability to pay for vaccines, but also the ability to produce. Governments like South Africa may be able to afford vaccine roll-out, but they do not have millions of dollars lying around to finance up-front investment in production. Development finance institutions should not be criticized if they invest in vaccine factories in middle income countries rather than lower income countries.

To date, the rise in ODA in 2020 at times of crisis is little cause for celebration. But there is still the chance to put the future of international public finance on to a more robust footing.