Yet only a few – most notably South Korea, Taiwan and Israel – have managed to continue right up to high-income status. The rest, like Argentina and South Africa, become stuck in the ‘middle-income trap’.

One reason lies in the development of sectors like manufacturing. This creates powerful interest groups that may attempt to block policy reforms designed to continue the transformation process, perhaps by resisting the elimination of subsidies and protection. Resistance may also come from workers and unions, leading countries to try and sustain labour-intensive sectors with high wage costs.

Second, economic transformation is also costly to sustain. Emerging manufacturing sectors in LICs tend to start off as net demanders of imported intermediate goods. If these sectors do not quickly become internationally competitive to export, or the country doesn’t develop domestic sources of intermediate goods, then economic transformation becomes very costly overall.

Finally, many MICs fail to ‘lock in’ some reforms in the form of international agreements. Although many of them participate in trade agreements, they fail to create institutional and policy commitments that provide a signal of long-term commitment to the transformation strategy.

Lessons from Argentina and South Africa

Economic transformation implies an increase in the productivity of available resources, with the transition to middle-income status generally characterised by the movement of resources between activities. But transitioning to high-income status usually means that productivity levels out across firms within sectors, as less productive firms close or upgrades across all firms occur. So most productivity growth happens within certain sectors.

You can see this in Argentina and South Africa, two countries stuck in the middle-income trap which both went through a similar transformation processes.

Both adopted policies from the 1950s to 1970s which, though costly, facilitated the development of a wide range of domestic manufacturing activities from steel and aluminium to car manufacturing. They also developed typical MIC manufacturing sectors such as textiles, garments and plastics, and at the same time increased productivity levels in traditional sectors like agriculture.

But recent productivity growth in both countries has been slow, and taken place mostly within certain sectors. For Argentina, this has also been significantly affected by its volatile macroeconomic cycle. 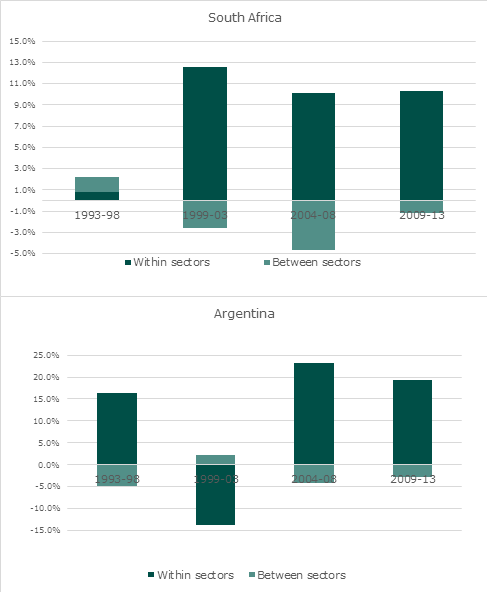 The key mistake that both governments made was failing to put in place active policies towards the reconversion of their productive sectors (i.e. from domestic to export-oriented sectors) and the skills of the people working in them. The productive structure in both countries is characterised by a combination of extremely productive, competitive firms in particular sectors, and extremely low productivity in others.

Both countries are working towards getting out of the trap. Although struggling with the fall in mineral prices, South Africa’s Industrial Policy Action Plans emphasise spill-overs and seek to support the development of labour-intensive and export-oriented sectors. Argentina’s National Productive Plan aims to increase competition, enhance integration with the rest of the world, reduce consumer prices and increase the quality of jobs.

So what can poorer countries today learn from these experiences?

How low-income countries can avoid falling into the trap

When LICs are planning their transition to middle-income status, they need to be thinking ahead to eventually achieving high-income status. This is absolutely key, and should inform any policies they implement right from the start.

So, when designing targeted industrial policies – for example, allocating support and resources to a priority sector – these policies should include ‘sunset clauses’ with clear end dates, making it clear to all stakeholders that this support isn’t intended to be permanent.

Production in targeted sectors should also be oriented towards the export market – the size of domestic markets in LICs tends to be limited, and foreign competition is vital both for continued productivity growth and for stimulating innovation.

Finally, countries need to invest in transforming their education systems in a way that will equip the labour force to continuously adapt.

There is a strong correlation between the quality of education and economic performance – education is an area where South Korea and other successful industrialisers in Asia have managed to excel, particularly in science and maths. At the same time, the education system needs to stimulate the creativity that fuels the innovation process.

Transforming a country’s productive structure isn’t easy, and doing it in a way that ensures they can eventually go further than middle-income status is harder still.

But by learning from the successes of high-income countries – as well as from the failings of those stuck in the middle-income trap – today’s poorer countries can design their strategies for continued economic transformation, right from the start.