Hero image description: Photo: Tirhas, 35, has been in Ethiopia for six years but is not permitted to work Image license:© Gabriel Pecot/ODI

‘Anywhere I can find a job and support my family’

Six years ago Tirhas left her two children in Eritrea. She was desperate and struggling to survive. Her husband is a journalist and was imprisoned for seven years by the regime. ‘We [didn’t] have enough money to pay for house rent, food, clothing, therefore we don’t have any options,’ she said.

She planned to find work and send for her children once settled. But in six years there has been little progress and she has lost faith in state institutions. ‘Let god help us. I [rely] on god to reunite me with my kids and parents in Eritrea.’

‘We are just waiting to see what will happen.’

Tirhas lives in Addis Ababa with her husband (who fled the country separately) and their three-year-old son, born in Ethiopia. When the couple arrived in Ethiopia, they were sent initially to Adi Harush, and then back to the capital so her husband could receive treatment for a heart condition. ‘There are a lot of problems and challenges … in Addis Ababa. In the very beginning we didn’t have money to pay for house rent. The landlord was so generous and allowed us to stay. I was so ashamed. We also had so many nights and days without food,’ Tirhas said.

Her husband’s heart problems haven’t improved. Tirhas is exhausted by the bureaucracy of both the healthcare system and the resettlement process. At one stage a doctor asked for a bribe to prevent them both being sent back to the camp. Tirhas laughed. ‘We have just left our country, hating the corruption; we will not pay a dime here.’ In 2015 the family’s application for resettlement to the US was accepted. ‘We are just waiting to see what will happen,’ Tirhas says.

Tirhas cannot speak of her family in Eritrea without tears, but she is hopeful. ‘I don’t care wherever it is I go, as long as these issues are fulfilled: get a job, call to my parents, reunite with my kids. It can be anywhere I can find a job and support my family.’

Ethiopia is a hard place to settle

Like all refugees in Ethiopia, Tirhas and her husband are not legally permitted to work. For most Eritreans based in Addis Ababa, UNHCR provides subsistence money, but liveable, cheap accommodation in the city is scarce. Even middle-class Ethiopians struggle to pay city rents. Refugees are scattered far away from the city centre, where the UNHCR processing centres and major NGOs are based. A simple task, such as replacing an identity card might involve being sent from one office to another on different days incurring prohibitive transport costs.

Tirhas began two courses, in English language and computing, at the Jesuit Refugee Service’s (JRS) community centre, tucked off a busy thoroughfare downtown, not far from the national museum. The centre is a lively place where refugees congregate to chat or attend classes run by the charity. There is a library and a small café run by refugees. Teenagers play volleyball in the yard and there is a nursery. Tirhas would like to bring her son here every day and complete her courses but the bus fare is more than she can afford. They get by with help from friends and neighbours, many have little themselves. ‘Somebody might give you 200 Birr here, somebody might give 200 Birr there, and those who are leaving to go to western Europe are leaving their clothes and shoes, so you can have it.’

‘They have talent, they have skills’

'They have talent, they have skills'

'There is nothing that makes you stay in Ethiopia'

Hanna runs the centre in town. It was established in 1996 to welcome refugees of all backgrounds and faiths. Alongside the community services, counselling and training, the centre provides emergency assistance, such as clothing, food or transport fares. Hanna thinks there are opportunities for refugees to find informal work, but ‘they have no control over what’s happening to them.’

It is this lack of control that makes it difficult to settle. Ethiopia becomes a bridge to better opportunities elsewhere. ‘There is nothing that makes you stay in Ethiopia because the process is too slow,’ said Yesuf, a 20-year-old refugee from Assab in southern Eritrea. However, Yesuf doesn’t think he will take the irregular route from Ethiopia. After three years of trying to settle, he applied for resettlement in 2016.

Yesuf fled Eritrea with his mother in 2013. They lived for two years in the Tigray region, first with an uncle and then in a camp. Yesuf applied for one of the scholarships available for refugees and won a place to study software engineering at Adigrat University. He wanted to study medicine, but that course wasn’t available on his scholarship. ‘My big dream is medicine,’ he says. ‘My mother raised me alone. She worked in the soldiers’ camp. She suffered a lot of problems only for me. That is why my big dream is to help her come out of this disease. To be cured of HIV and be free.’

Yesuf quit his course to care for his mother when she became ill. He said she wasn’t properly cared for in the camp, so they both obtained permission to move to Addis Ababa. Yesuf first went along to the centre to play volleyball, but fell into translating for the centre’s staff (he speaks fluent English and is teaching himself French). Hanna noted his affability and ease with the other centre visitors, and invited him to interview for a job as an IT technician. He now runs the internet café and provides computer support. 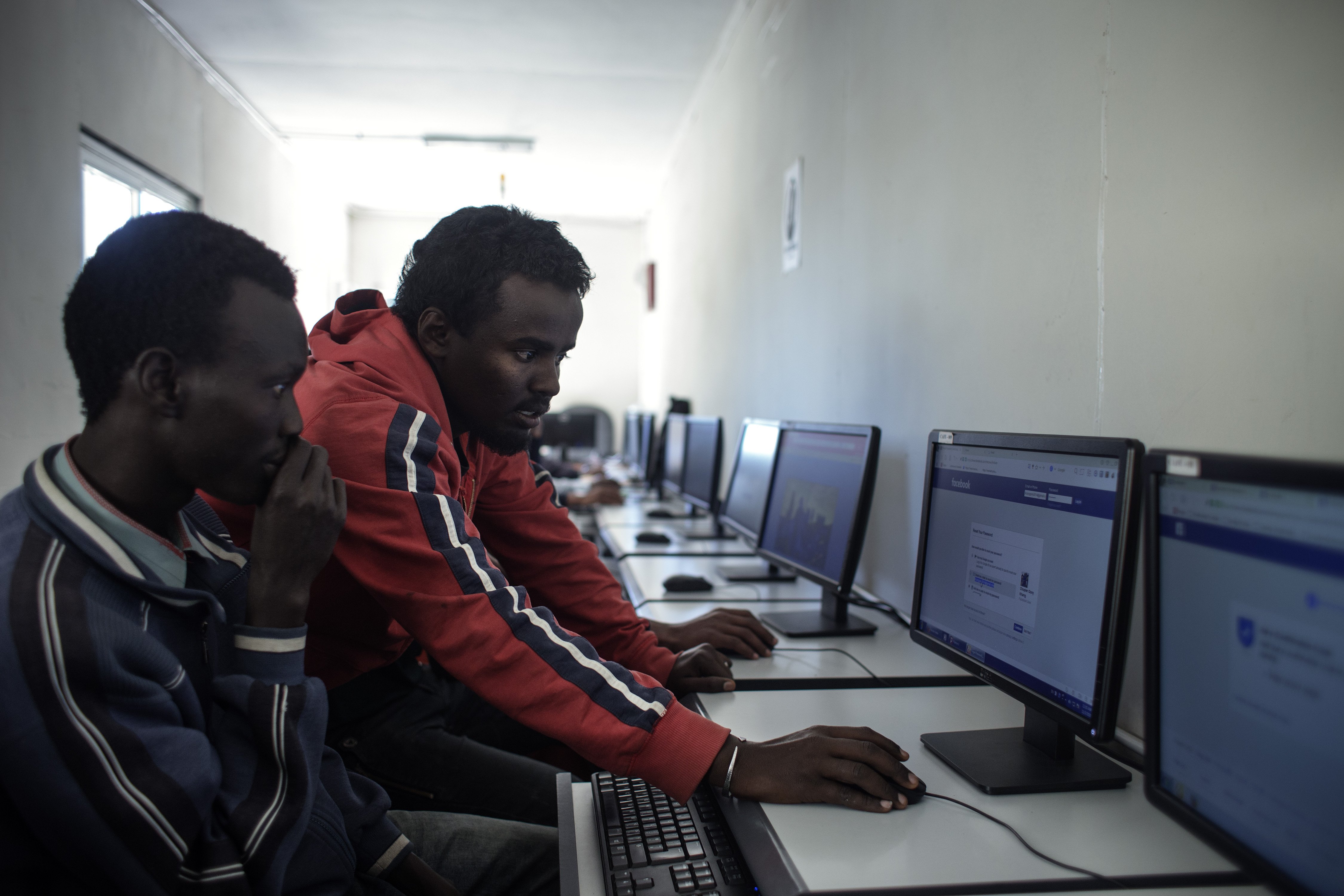 Yesuf admits that he is lucky, having secured one of the few jobs available to refugees, which includes a free lunch and coffee. But he wants to continue studying and find a way to create a stable life. His mother is weak and vulnerable to bouts of severe illness. He is unable to care for her while working at JRS and has pinned his hopes on resettlement outside of Ethiopia. ‘That is the only dream I have. May god help me.’

Prevention policies might slow onward movement, but don't always stop it. Unless conditions in Ethiopia improve for refugees and migrants, they will continue to seek security and opportunity elsewhere.