There has been a big push for a standalone goal on gender equality in formulating the post-2015 development agenda. But how do girls and women prioritise gender equality?

We know that gender equality is both intrinsically important and that it contributes to improved development outcomes for all. Current data on the gender front reveals some evident gaps but also some encouraging news.

The gaps: over the nearly 15 years of the Millennium Development Goals (MDGs), while considerable progress has been made on some fronts, progress on women’s empowerment has been relatively slow. For instance, in many parts of the developing world, girls remain considerably less likely to attend secondary school or receive tertiary education, or visit a doctor in cases of illness. Fewer women than men are employed outside agriculture and, around the world, women are discriminated against in terms of wages and under-represented in parliaments.

Women often appear to accept such inequalities. For instance, in Demographic and Health Surveys (DHS) from over 50 low and middle-income countries conducted over the past decade, around four in 10 women agreed that a husband was justified in beating his wife if she went out without informing him, neglected their children, argued, refused sex or burned food; and a greater share of women agreed in more gender-unequal countries. About one in ten believed it was acceptable in all these cases. World Values Survey (WVS) data shows that women in gender-unequal societies are more likely to agree that a university education is more important for boys than girls and men have more right to jobs when they are scarce.

At the same time, new evidence points to an encouraging tendency. Analysis in my recent ODI report finds that, despite being willing to accept gender inequality in some respects, women in the most gender-unequal societies aspire for greater gender equality as a critical development goal.

MY World, a global UN survey on people’s priorities that is part of the consultative effort to frame future development goals, asks people to select six out of 16 development priorities that are most important to them and their families. So far the survey has been answered by over 3.5 million people across 194 countries.

Overall, men and women alike seem to agree on what is most important to them and their families: a good education, better healthcare, better job opportunities, and an honest and responsive government (see Graph 1).

Who is most likely to prioritise gender equality?

The explicit gender-related option, equality between men and women, is one of the few exceptions to this rule, and is ranked eighth among female respondents, and 11th among male respondents. Over 35% of girls and women selected it (compared to less than 30% of boys and men). Characteristics like age and educational attainment have some bearing on people’s expressed priorities, but country-level circumstances (such as country income levels) seem to explain a larger share of emerging voting patterns.

But when disaggregating countries based on UNDP’s Gender Inequality Index, which measures differences in achievements between men and women, a more interesting trend emerges. About four in 10 of female respondents in the most gender-unequal quintile (20%) of countries select gender equality as a priority. This share falls in the next two quintiles to slightly over three in 10 (see Graph 2). In the subsequent more gender-equal quintiles, the share of girls and women voting for gender equality increases again; about half of women in the top 20% of countries select it as a top priority. Interestingly, the gender-differential is fairly low in the most gender-unequal countries, suggesting men in these countries appear also to support initiatives to bridge gender gaps.

This pattern is corroborated by the 2005-09 WVS, which asks respondents to rank five MDG issues in order of importance: women from the most gender-unequal countries were most likely to select discrimination against girls and women as one of the top two challenges – despite often belonging to poor countries with other pressing needs. This share then falls in importance before rising again in the most gender-equal societies. 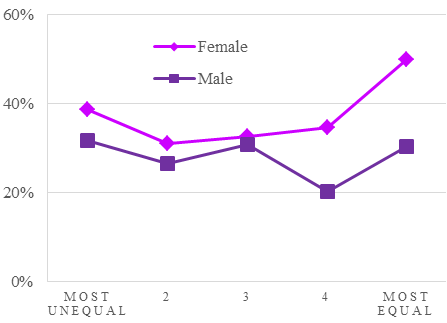 The high share of votes for gender equality by female respondents in countries where women are particularly disadvantaged suggests a paradox: women in gender-unequal countries may appear reconciled to inequality in some respects (as attested to by DHS, WVS and other data), but they also want equality. Women in gender-unequal countries are also more likely to prioritise other development objectives wherein gender equality is implicit (such as a good education and better job opportunities) than their male counterparts. This suggests that more work is needed to understand what women in different contexts mean by greater equality.

And it is not just survey results: we see considerable evidence of women in gender-unequal countries articulating their aspirations and frustrations with barriers to their realisation. In parts of many countries across South Asia (including Bangladesh, India and Pakistan) and Africa (for instance, the Congo and Kenya) women have united to demand justice for victims of sexual violence, and there have been recent protests for equality under the law and in practice (in Morocco and Mozambique).

Why does this matter?

Gender equality has long been a global aspiration: in the MDGs, in human rights agreements, and in many other global agreements. It is likely that the new ‘Sustainable Development Goals’, currently being negotiated in the UN, will contain a goal on gender equity in all countries in addition to having gender-disaggregated indicators for other goals.

Making this happen will require political action and social change in all countries, and perceptions data can shed light on how to mobilise and gain support. MY World suggests that both men and women in countries where women are particularly unequal do place a high priority on changing this situation and this provides an encouraging basis for action. It also reveals the common priorities that men and women share for improving their lives and those of their families, and the potential for generating a global agenda that has wide support in holding governments to account for improving the lives of all their citizens.