​Coal generates 40% of the world’s electricity, but its dominance is perilous. Our planet is limited to a ‘carbon budget’ of emissions to keep global warming to a safe level of, at most, two degrees Celsius.

Coal is the number one source of carbon emissions: without dramatically phasing down unabated coal power, we will not avoid catastrophic climate change.

The G7 must lead the way

This week, E3G published an overview of G7 countries’ track record on coal. It rightly argues that the G7 must lead the world in phasing down coal: they emit over two times the greenhouse gases of all 54 countries in Africa combined.

One battle has largely been won. Cleaner alternatives mostly out-compete coal in the G7 already, so little new coal capacity is being built, except in Japan. In the USA, 84 gigawatts of coal power have been retired since 2010, mostly from cheaper competition. The G7 now represents only 2% of planned new coal capacity.

But the war continues. The G7 remains deeply dependent on coal from existing installed capacity. Energy systems are notoriously slow to change and coal power is the most at risk of ‘lock in’: coal plants have average lifespans of 45 years. Once built, a coal plant is politically, financially, and sometimes legally challenging to decommission before the end of its life cycle. Fuel-switching retrofits are expensive.

Existing infrastructure, largely coal, will produce enough emissions to exhaust somewhere between 70% and 90% of our two-degree carbon budget, if used to the end of its productive lifecycle. Much of this infrastructure is in the G7 plus China. Accelerating the retirement of aging coal plants requires policy action.

But planned coal development, mostly in the developing world, will singlehandedly max out the world’s two-degree carbon budget

To meet our two-degree target, we need to accelerate the decommissioning of coal plants in the developed world, starting with the G7. But instead we are building new ones, and most planned coal plants are in the developing world.

A global transition within two degrees implicates a larger pool of countries, including politically sensitive ones.

India and China alone account for 67% of current coal construction. Planned expansion is untenable: 88% of known coal reserves are unburnable, and just one-third of planned construction would burst the carbon budget. Even if we develop affordable carbon capture and storage technology (a big if), we’d only be able to burn an additional 6% before 2050 due to its late introduction and slow roll out. 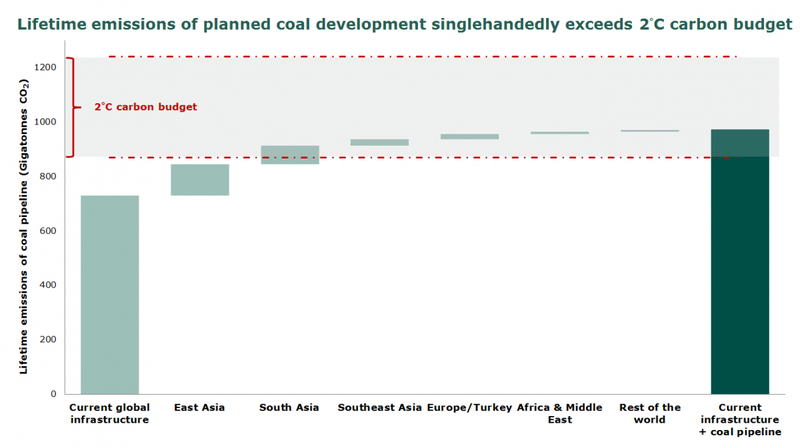 The coal development already planned would leave no room in the carbon budget for other activities that produce greenhouse gas emissions.

That means no room for driving, flying, expanding agricultural land, producing beef, lumber, paper, cement, or metals. Not in the developing world, nor in the developed.

Developing countries have different domestic responsibilities than the G7. It’s true they need to fight poverty and spur economic development.

In light of these priorities, it is hard to imagine developing countries reducing installed coal capacity yet (aside from China, which will definitely need to phase down existing capacity), particularly while so many remain operational in rich countries.

However, spending the world’s remaining carbon budget on new coal is nonsensical. Unlike other sectors, power generation has many alternatives.

Faced with this stark reality, the coal industry is marketing itself as the answer to ‘energy poverty’ in developing countries, despite evidence that the vast majority of poor households would secure energy access most cheaply and quickly through other means.

In fact, left unchecked, climate change could draw up to 720 million into extreme poverty between 2030 and 2050. Development champions should not push coal power on poorer countries: if we max out the carbon budget, it is the poor that stand to lose the most.