One of the consistent features of the cuts to ODA taking place over the past year has been the lack of comprehensive, publicly available information. Changes in the structures of FCDO and a new set of priorities to group spending have compounded the difficulties of making comparisons of the information.

Nevertheless, with the scarce information available, analysts have been starting to piece together a greater understanding of what the pattern of the new UK ODA budget is likely to look like. Ranil Dissanayake and Richard Watts have both provided really useful pieces of analysis on changes to the thematic priorities of the UK ODA budget.

To date, there has been less analysis undertaken of how UK ODA been prioritised and budgeted across different countries. At the prompting of Laurie Lee, we decided to have an initial look at changes in country allocations using IATI data from Dev Tracker and comparing this against actual UK ODA spend in 2019.

Some caveats are needed:

- This comparison is likely to somewhat over-state the size of the cuts at the country level. The information in Dev Tracker is built up from the ‘bottom-up’ through information reported on the expected budgets and actual spending of individual projects. Where budgets have not been allocated to specific projects, or the budgets for specific projects have not been recorded, they will not be captured in Dev Tracker. The FCDO will not yet have made all decisions on how to allocate ODA funds to specific countries. For instance, £400 million of humanitarian spend has yet to be allocated to specific countries.

- It is also important to remember that a large amount of UK ODA is also allocated to multilateral agencies, who then in turn decide how those funds will be allocated to individual countries.

With these caveats, there are nevertheless, still some useful observations that can be drawn:

- For a start, in 2019, DFID channelled about £3.8 billion through bilateral aid. To date, just £1.5 billion of bilateral aid projects have been budgeted for by FCDO, a reduction of 60% on average. This could still change for the reasons mentioned above, but lends credence to earlier reports that ambassadors were being asked to make cuts in the region of 50% to 70%.

Second, the data helps to give an indicative sense of which geographies appear to have been relatively prioritised by the FCDO in managing large reductions to the bilateral, country-specific aid programmes. Although cuts have taken place across the board, this is not ‘salami-slicing’. There are regions and countries that have been cut back more sharply or relatively protected. Some headlines in that respect:

- Consistent with the Integrated Review, there appear to be a major shift away from Middle East. Iraq, Jordan, Lebanon, Palestine, Syria, and Yemen all seem to be on the end of relatively severe planned cuts, where budgeted projects are more than 70% down on 2019 ODA spend.

- From an ODA perspective, the ‘Asia-Pacific tilt’ is a relative tilt to South Asia. Budgets in India, Nepal and Myanmar seem to have been relatively protected (cuts between 30% to 50%)

- While the Integrated Review mentioned a focus on East Africa, there is a divergent picture within the region. Uganda and Rwanda have seen relatively large reductions in their budget, while reductions are much smaller Sudan and Somalia

- The only places that seem to have been largely protected from ODA are the UK’s overseas territories in Montserrat and St Helena.

Again, it is important to note that these comparisons are instructive, not cast-iron predictions of 2021/22 actual ODA spend. But in the absence of more comprehensive information, they can serve as a useful indication of the shifting geography of UK aid priorities. 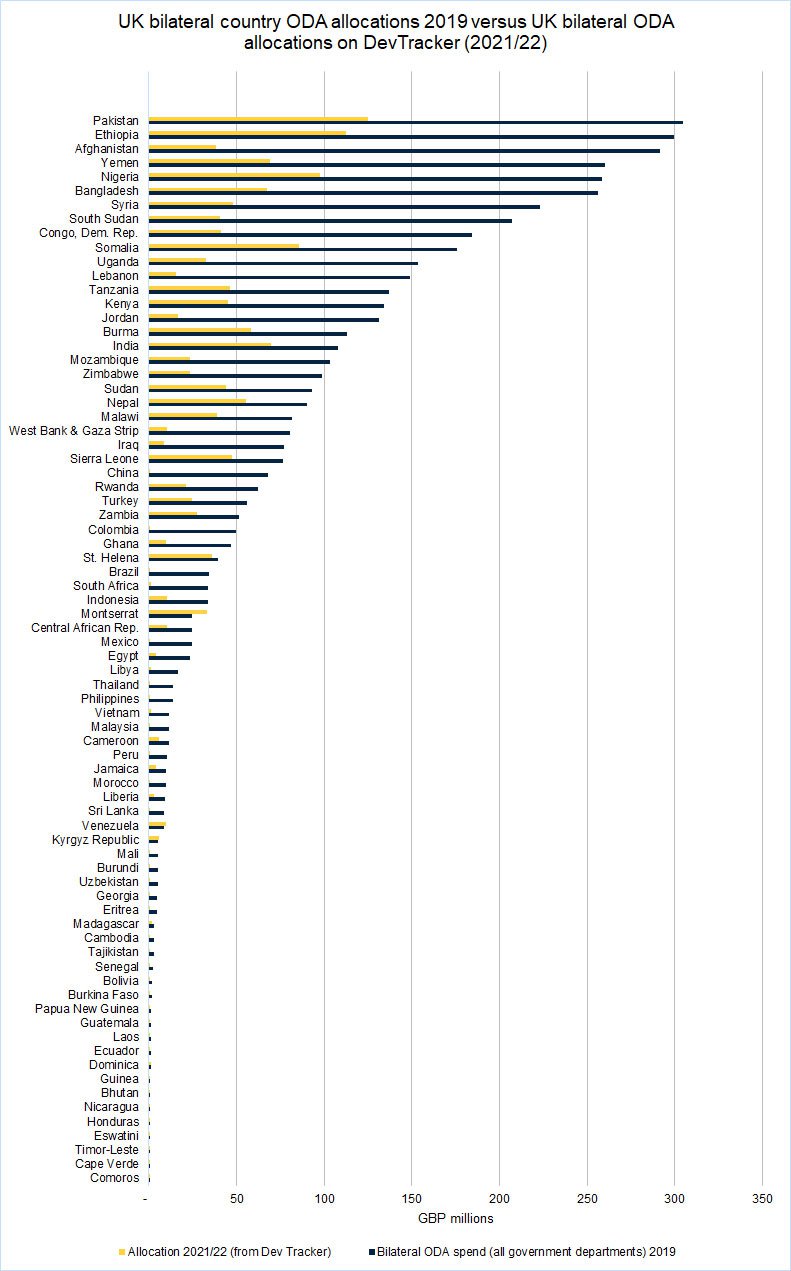 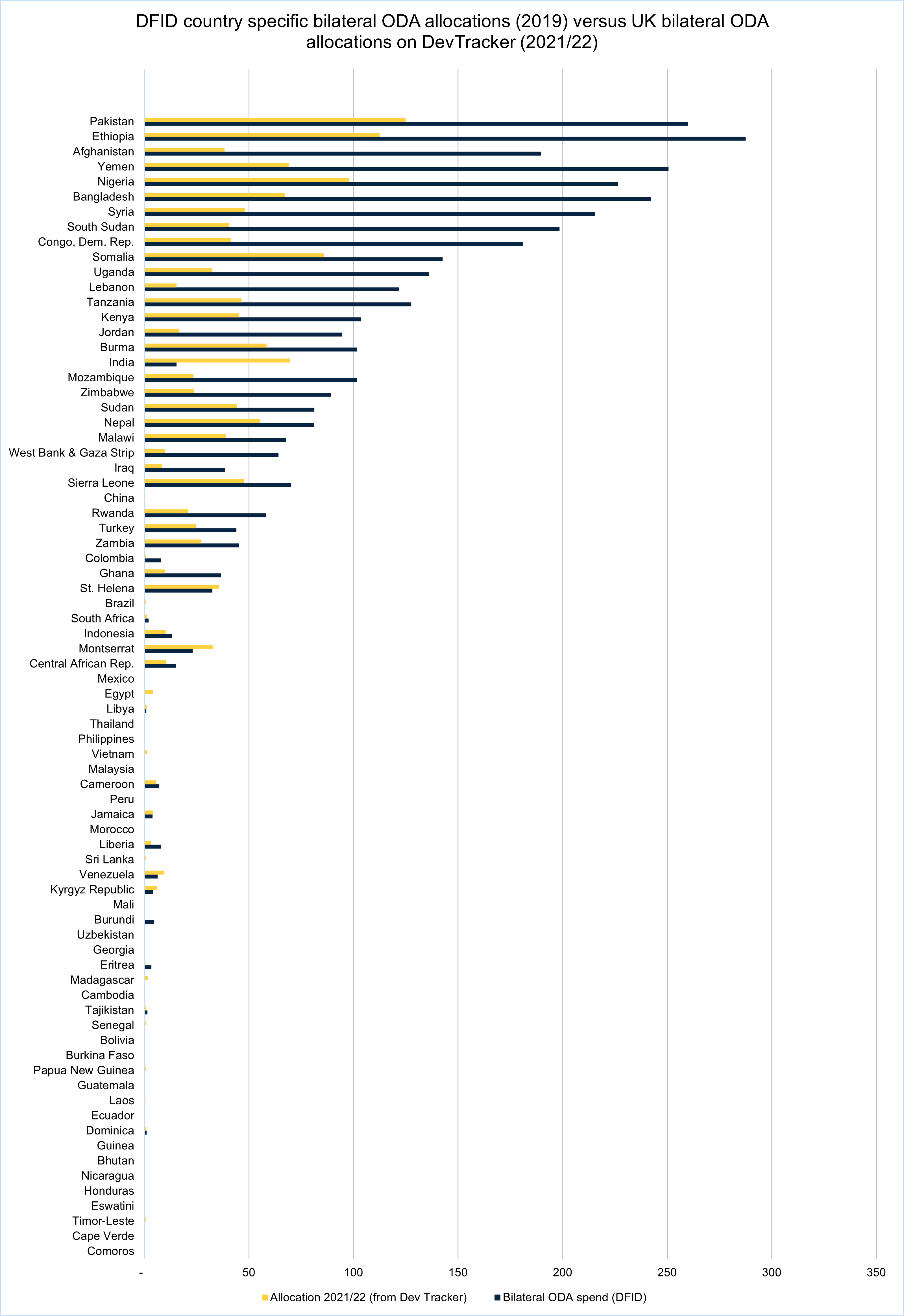