The pressure to deliver results often limits the amount of time available to define the root cause of a problem. This is a false economy, as it can lead to projects and programmes that address symptoms rather than causes. ROMA helps you understand the root cause of the initial problem you have identified. Two different options are presented below. The ‘five whys’ technique is useful for a first approximation at finding the root cause. A fishbone diagram helps you delve into the issue in more detail.

The ‘five whys’ technique asks you to identify the initial problem and then answer why it is a problem five times. After the fifth ‘why’ you will have reached a real depth of understanding about the issue. This helps go beyond the initial issues or those that are immediately apparent, to work out what is causing the problem and where the most effective entry points are. Below is an example from a project on public expenditure and financial accountability (PEFA).

Public Expenditure and Financial Accountability (PEFA) indicators are widely used to assess whether a country has the tools to deliver good fiscal discipline, to allocate its resources strategically and to use its resources for service delivery efficiently. A suite of indicators is used to make these assessments (see www.pefa.org), one of which relates to public sector procurement, which we explore here.

The initial problem statement might be: ‘the problem is that we get a D on the PEFA procurement indicator, because we do not have a law requiring competitive bidding across government’.

1. Why does this matter?

Without this law there is an incentive not to use competitive bidding in procurement deals.

Without this incentive, most procurement deals are currently done through sole source methods.

We have evidence that many procurement deals have been overly costly and goods are poorly provided.

High-cost, low-quality procurement is undermining the provision of key services across government.

This process of the initial specification of the problem – the need to introduce an externally defined ‘best practice’ to mandate competitive bidding – is in fact prompted by the need to improve the cost and quality of procurement. The latter problem is much more complex but is the root cause that needs solving. However, it is unlikely to be addressed by simply mandating the use of competitive bidding.

It is very unlikely that you will need to ask ‘why?’ more than five times. In some cases, you may find you have reached the root cause of the problem after only three or four rounds of questioning. You will know when to stop because the answers will begin to broaden out rather than narrow down.

Delving into the detail: fishbone diagrams

The ‘five whys’ technique may give you sufficient information to begin to construct a robust objective for your policy-influencing work. However, if it is clear the problem contains several different components that need to be broken down, a fishbone diagram can help you get into the detail (see 'Five whys'). Sticky notes are helpful to brainstorm and group the sub-issues that together contribute to the main issue you are trying to address.

Every year, 2 million Nepalis travel abroad for permanent and semipermanent work, leaving through a network of formal labour agencies and informal recruitment agents. A large number of them are extorted – more than 75% pay above the legal maximum fees to secure a job. A large number are also exploited – forced to work inhuman hours in difficult conditions, paid wages considerably lower than promised, being sacked when they fall ill.

This exploitation and extortion occurs along the chain of agents and agencies through which migrants travel in Nepal, among middlemen in India and receiving countries and among employers.

Figure 3 shows the component parts of this problem. Policy does play a role but it is not the most important one. Although laws are in place to penalise Nepali manpower agencies proven to be mistreating migrants, very few such agencies have actually been punished. Middlemen are unregistered, which makes it difficult to enforce laws, and the formal labour agencies that oppose reform have political ties.

Competition for places reduces the demand from Nepali migrants for better treatment. Since the Gulf is a considerable distance from Nepal and Gulf governments are reluctant to lose a source of cheap labour, there is no real political appetite to reduce the exploitation. 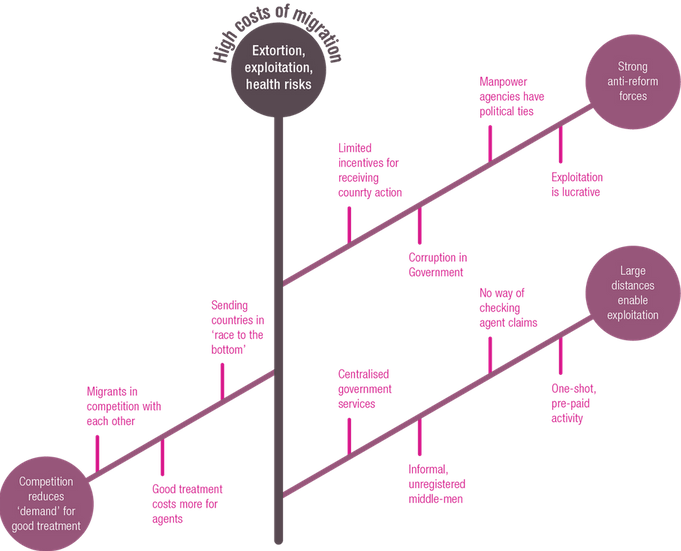 Figure 3 shows the issues Nepali migrants face as they look for overseas employment. It was developed to help design a programme to reduce the high costs of migration through packages of technical assistance and other types of support. The process began with detailed reviews of the literature on migration, interviews with policy-makers and representatives of migrant workers and wider consultations.

Analysing the stakeholders of a problem

Whether you have used the ‘five whys’ technique or a fishbone diagram, an important step is to map which people/organisations/bodies have an interest in the problem – that is, the stakeholders. Both techniques will probably have shown you that a wider range of stakeholders are involved in the problem than was initially apparent.

A stakeholder mapping exercise helps you understand what drives their interest, influence and actions or explains their positions in a programme. It can generate a large amount of useful information about the relationships between different groups of people and how those groups are likely to behave when confronted with the possibility of change.

ROMA uses a simple 2x2 matrix, the ‘influence and interest matrix’ (Figure 4), to map the stakeholders, in four steps:

Figure 4: The influence and interest matrix 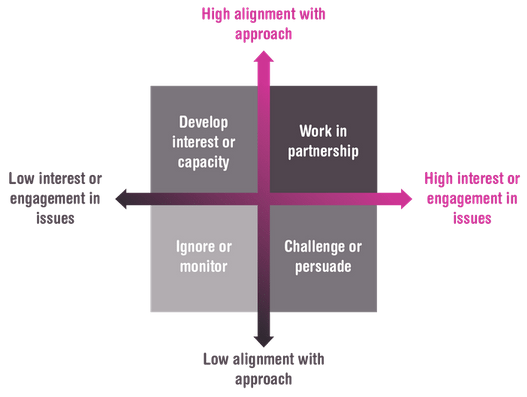 It is particularly helpful to do this as a group exercise, either with your immediate team or with your primary stakeholders – those you are working closely with to bring about change. Ensure a good variety of people in the group; include those working on communications and M&E, not simply the people implementing the project or programme.

The greater the range of people the more detailed your analysis will be, though you need to balance this with considerations of how you will manage the process. If the group is large (say, more than eight people), it may be useful to allocate someone the role of facilitator, to keep the process active.

Discussions about who is influential, why and what forms of interest they show in an issue can uncover important relationships between the stakeholders that you can subsequently use to develop your influencing objective. It will also make it more likely that you will consider the full range of people and organisations that need to be included.

There are three things to remember when constructing an influence and interest matrix:

Using the influence and interest matrix for large or complex projects

For a large multi-country project based at ODI, this matrix was developed in two stages. One stage was done in London by the small project coordinating team, to map the international actors who would be interested in the results of the project, such as donors. The aim was to understand how best to communicate and discuss emerging findings.

The other stage was done by the project teams in each country, working with their local collaborators to draw up a map that would help them understand how best to engage with different actors in the policy process in each country.

Also in this chapter: