ODI looks beyond the traditional landscape of humanitarian aid and development to provide fresh research, analysis and guidance on new and protracted crises.

Europe’s refugee crisis is part of a global trend of large movements of refugees and migrants as people flee violence and search for new opportunities. In September 2015, a landmark study from ODI, Protracted displacement: uncertain paths to self-reliance in exile, mapped support for self-reliance and livelihoods among displaced people and provided a tool to gauge where and how to provide assistance. The study, which gained widespread praise, inspired 10 things to know about refugees and displacement, one of ODI’s most popular publications in 2015.

We worked closely with the World Economic Forum (WEF) to inform its approach to refugees. Our research on Rohingya refugees in Malaysia showed how refugees could contribute to their host countries, and the policies that stop them doing so. This work was profiled in the WEF’s Global Risks Report 2016. ODI’s Sara Pantuliano became Vice Chair of the WEF Global Agenda Council on Risk and Resilience, and her influential op-ed for the WEF – featured by the Huffington Post – positioned support for refugees as an investment in the future.

The humanitarian system is struggling to cope with the evergrowing number and scale of crises. So far, reforms have focused on improving what is already in place, rather than tackling deep-rooted problems within the system. This was the subject of our annual Humanitarian Policy Group lecture, Beyond the World Humanitarian Summit: addressing political blockages to humanitarian solutions, by Ambassador Hesham Youssef, Assistant Secretary-General for Humanitarian Affairs from the Organisation of Islamic Cooperation (OIC).

Our study on the Ebola response in West Africa looked beyond the specific challenges of this crisis to examine deeper flaws in the humanitarian system. The report influenced DFID’s post-Ebola strategy, and informed the findings of the High-level Panel on the Global Response to Health Crises. It was launched in October 2015 around the Global Consultation for the 2016 World Humanitarian Summit at a high-level event in Geneva.

We acted as the Secretariat for the High Level Panel on Humanitarian Cash Transfers, which drew on a decade of research, much of it from ODI, to argue for the transformative potential of large scale cash programming. The Panel’s September 2015 report, Doing cash differently: how cash transfers can transform humanitarian aid, informed recommendations from the UN High-Level Panel on Humanitarian Financing and the Secretary-General’s report for the World Humanitarian Summit. It was covered by the Economist, the BBC and Bloomberg Businessweek, among others. 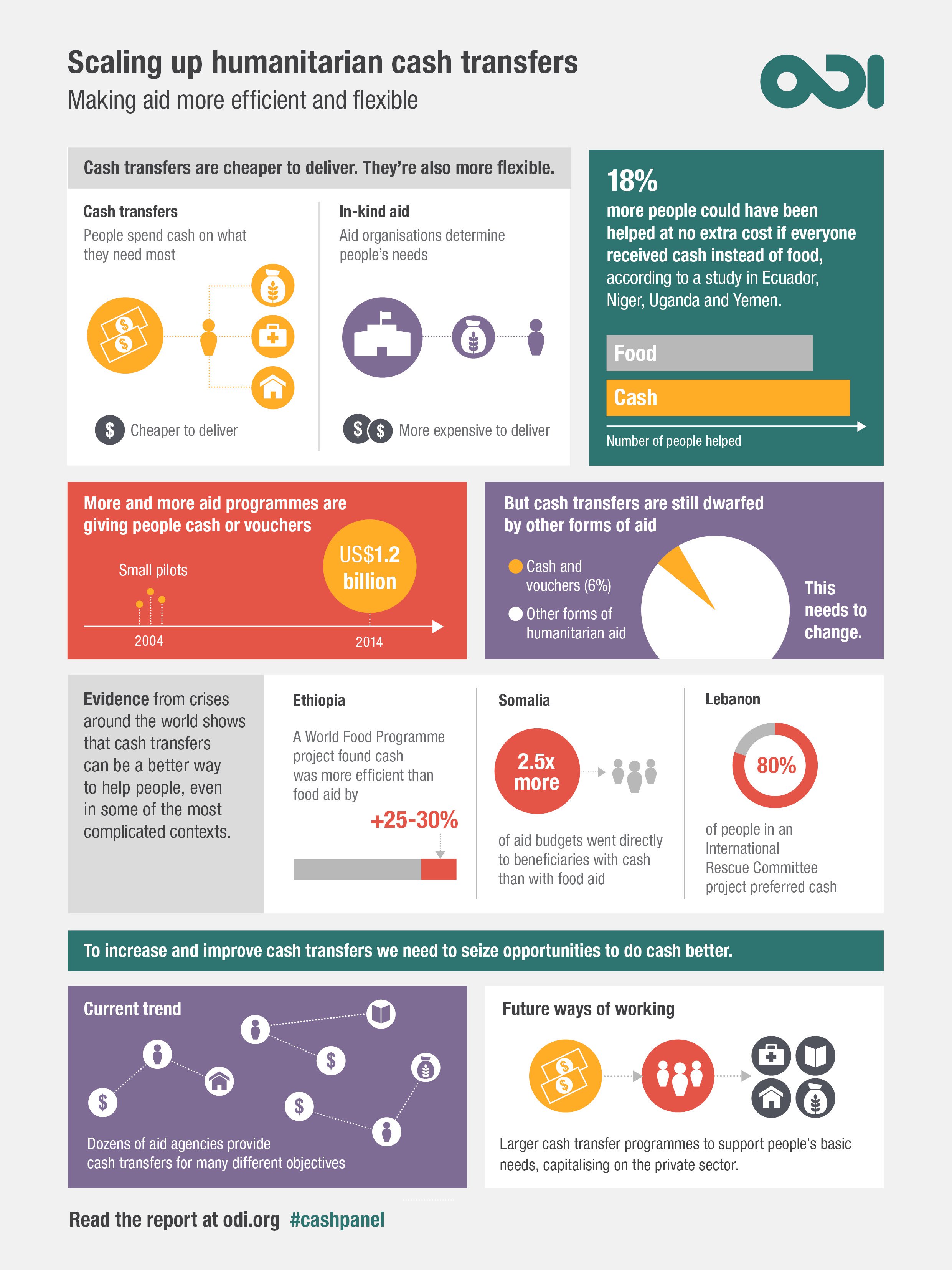 The g7+ group of fragile and conflict affected countries drew on ODI research for its publication Aid instruments for peace- and state-building: putting the New Deal into practice.

After a successful five-year relationship with the Post-Conflict Reconstruction and Development Unit (PRDU) at the University of York, we partnered with the London School of Economics and Political Science to offer a new annual senior-level course on Conflict and Humanitarian Response. The course attracted senior UN and NGO officials and donor representatives with extensive humanitarian experience, many working on today’s most complex crises, including Syria, Iraq and Somalia.

In November 2015, Frank Gardner, the BBC’s Security Correspondent, chaired our panel discussion Iraq: providing aid in a ‘protection crisis’, launching a special issue of the Humanitarian Exchange on the Iraq crisis. Lise Grande, Deputy Special Representative of the Secretary-General for the United Nations Assistance Mission for Iraq, joined discussions on the rise of Islamic State and the impact of political fragmentation on Iraq’s humanitarian environment.

In December 2015, humanitarian and security experts considered the plight of Yemen at our event Yemen’s forgotten war, held in collaboration with the Royal United Services Institute. Over the past year, the civil war has left 21 million people – more than 80% of the population – in need of humanitarian assistance. The panel, which explored what it will take to end this largely unreported conflict, was addressed by Amat Al Alim Alsoswa, Yemen’s former Minister of Human Rights.

In March 2016, our event Five years on, what’s next for Syria? marked the fifth anniversary of a conflict that has claimed over 250,000 lives and forced 12 million people from their homes. Bringing together humanitarian officials, Syrian aid workers and experts, the event discussed how to help people survive – and even rebuild – as the war continues. Speakers included Nigel Fisher, former UN Regional Humanitarian Coordinator for the Syria crisis and Wesam Sabaaneh, Director of the Jafra Foundation, a community-based organisation that works in Palestinian refugee camps within Syria.