As a response to the scale and the length of the Covid-19 crisis in lower-income countries, shareholders decided to bring the negotiations of the replenishment of the International Development Association (IDA) forward by a year. This decision averted a major drop in IDA grants and loans from next year. In a previous Insight, we argued that IDA would have been forced to reduce its lending to a projected $22.5 billion each year in FY22, from $35 billion in the current FY21.

The increase in IDA grants and loans from 2022 is welcome news indeed. But how should these IDA commitments be deployed across countries, sectors and instruments to ease the recovery from the Covid-19 crisis and help address the multiple shocks lower-income countries are facing? Here we argue that the current country allocation model is not fit and meant for this purpose. The Crisis Response Window (CRW) should be far larger than in previous replenishment rounds. Its allocation criteria should also reflect the multiple shocks lower-income countries are experiencing on their health systems, societies and economies. Furthermore, overall IDA assistance should be deployed with the most flexible instruments available in its toolkit to reach countries as fast as possible to boost local economies.

The country allocation of core IDA resources is based on two main components. First, the country’s governance and ability to spend resources well (i.e. the country performance rating, a combination of the Country Policy and Institutional Assessment and the portfolio performance): countries with better institutions and policies are expected to receive a larger allocation of grants and loans, all other things being equal. This is the largest component in the IDA allocation formula. Second, the needs of the recipient country, proxied by the income per capita (but inversely correlated – the lower the income per capita, the higher the IDA allocation) and the country’s population.

(To view the figures in the accompanying PDF, please see p. 4.)

These two broad criteria do not capture the impact of major macroeconomic shocks. For example, at the time of the Global Financial Crisis in 2008–2009, the World Bank Independent Evaluation Group found that ‘most new lending in response to the crisis reflected pre-crisis lending patterns and had a low correlation with the severity of the crisis impact’, especially in IDA countries where flexibility was more limited. Solely looking at the economic impact of the crisis, those economies that have been the most affected by the Covid-19 crisis would not be the main beneficiaries of IDA assistance, should core allocation rules apply.

The correlation between the average per capita IDA allocation in the IDA18 cycle and the impact of the crisis on some macroeconomic indicators is rather mild or non-existent, true whether including or excluding small island developing countries. Among these indicators we considered, for example, the recovery to pre-crisis levels of economic activity (the difference between gross domestic product (GDP) per capita forecast in 2024 and its pre-crisis value in 2019 as a proxy) (Figure 2a); the changes in the current account before the crisis in 2019 with the latest projections for next year (2022) (Figure 2b); the changes in export projections before and after the crisis (Figure 2c); the per capita revenue losses between pre-crisis levels in 2019 and the end of the IDA20 cycle in 2024 (Figure 2d). The correlations of these variables with the IDA per capita allocation by country are weak or non-existent.

Figure 2: The correlation between past IDA allocation and four macroeconomic indicators

(To view the figures in the accompanying PDF, please see p. 6.)

Beyond its long-term development objectives, IDA also plays a role to help countries affected by a crisis to return to their pre-shock levels of economic activity. In the most recent IDA cycles, the Crisis Response Window was introduced to address short-term economic and health crises and emergencies, and natural disasters (partly avoiding the risk of replicating the lending patterns during the 2008–2009 Global Financial Crisis – see Box 1). The amounts of the CRW have historically been small and restricted in scope.

Box 1 – A brief introduction to the CRW

The CRW provides resources, as a last resort, to address the impact of severe natural disasters, public health emergencies, and economic crises on IDA countries.

Piloted in the IDA15 cycle (2009–2011) it initially included economic shocks only (e.g. a decline of more than 3% of GDP growth across countries/regions) and then expanded to respond to severe and intense natural disasters and public health emergencies, declared by the country or the World Health Organization (WHO) in the following IDA cycles.

As illustrated in Table 1 and Figure 3, commitments have all in all fallen over time, and concentrated on health emergencies and disasters, rather than support to economic shocks. Furthermore, while the total envelope of the IDA replenishment doubled between IDA15 and IDA19, the CRW did not grow proportionally, especially in IDA19.

Going forward, as of IDA19, similar allocations to the CRW of $2.5 billion – 3% of that replenishment – will inevitably be inadequate to respond rapidly to the consequences of the still ongoing shock of the Covid-19 crisis (Table 1). 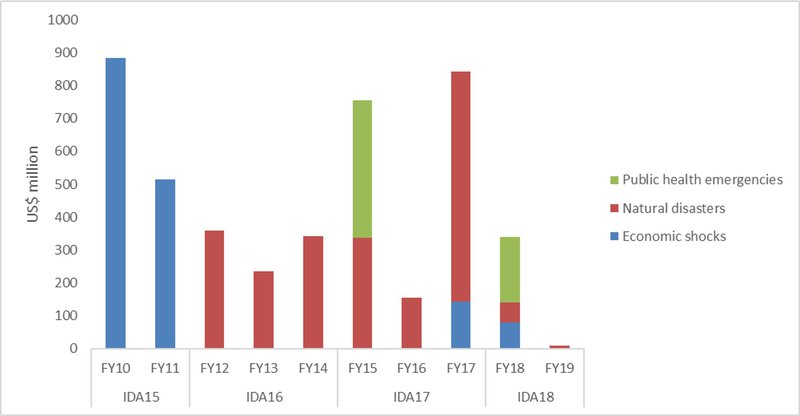 The nature and scale of the shock from the Covid-19 pandemic requires an expansion of the CRW and also a revisiting of the criteria for accessing resources. The shock triggered by the Covid-19 pandemic has reached lower-income countries through multiple and mutually reinforcing channels: the slowdown in the global economy, lockdowns and travel restrictions, and the health emergency. Its consequences on economic and social development in lower-income countries and on their ability to tackle the still ongoing health emergency have been far-reaching and severe (Figure 4).

Figure 4: Transmission channels of the Covid-19 pandemic in lower-income countries

Existing criteria may allow for the flexible handling of a dynamically evolving situation, but the criteria should be adapted and reflect the nature of the shocks and the response to the Covid-19 crisis in three areas:

Finally, the proportion of IDA grants and loans to health and education rose in 2020 but fell in 2021. The fall in the relative share of assistance towards health is somewhat surprising given the emphasis on the health emergency from March 2020 onwards but these might be captured in multi-theme/multisector programmes. However, countries are apparently less willing to access IDA (and International Bank for Reconstruction and Development (IBRD)) funding for vaccine procurement, owing to a combination of factors, from stringent vaccine regulatory approvals to restrictions on procurement processes. 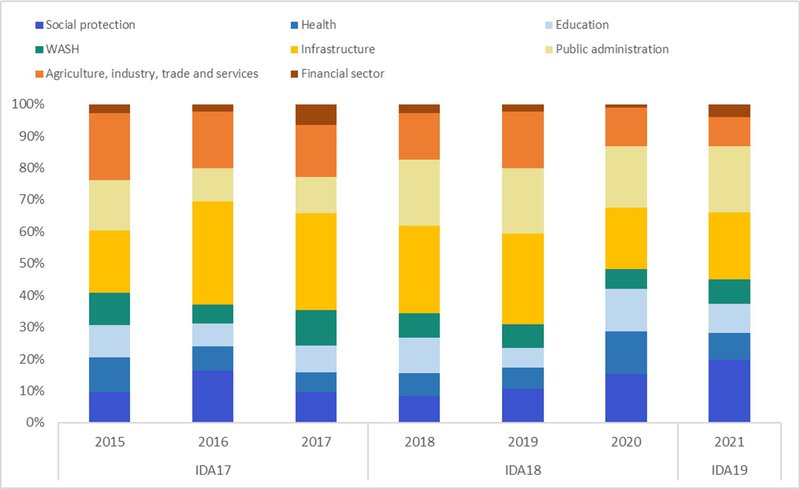 IDA resources should be deployed flexibly. In the immediate aftermath of the Covid-19 crisis the use of development policy finance (DPF) rose compared to 2019. However, more recently, the share of IDA projects approved as DPFs fell again (Figure 6). 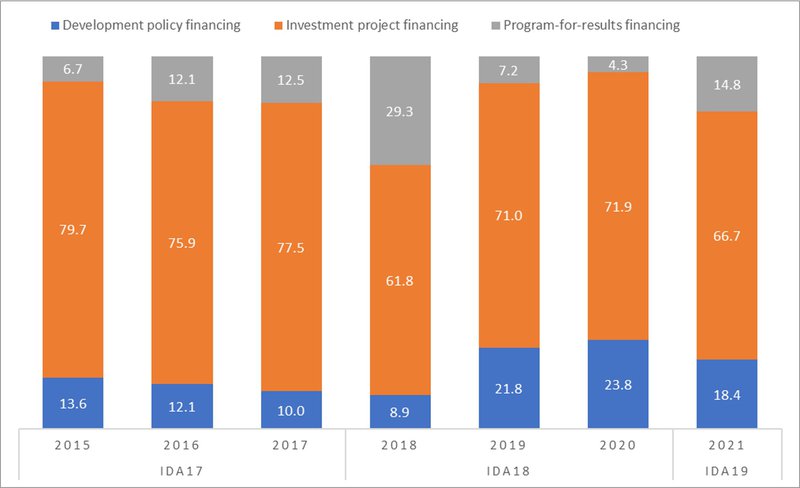 The share of DPFs on total grants and loans should rise in IDA20 instead, once again to allow for the more flexible and rapid use of resources. In our previous proposal for policy priorities for the IDA replenishment, we argued for a greater share of IDA assistance delivered as development policy financing or budget support, with external financing directly channelled through governments. This provides a much needed balance-of-payments support. It is also estimated to have a greater local economic impact, and would therefore likely have higher short-term fiscal multipliers and be more effective for economic recovery. 'Program-for-results' operations can also be an effective way to provide relatively flexible financial support quickly.

The path of the Covid-19 crisis is still uncertain, especially as the global vaccination programme is not progressing fast enough in lower-income countries. Many countries are still dealing with the emergency of the Covid-19 pandemic rather than being able to set the basis for the long-term rebuilding of their economies. For these reasons, the IDA Crisis Response Window should be much larger than in previous replenishment rounds. Its resources should also be allocated to those lower-income countries most affected by the Covid-19 crisis to address its health, economic and social impacts. We argue for the more flexible deployment of resources and a greater use of the DPF modality (or budget support) than done in recent months across IDA grants and loans.

The IDA20 replenishment offers a landmark opportunity to help finance the emergency and the economic recovery from the Covid-19 crisis in lower-income countries. The allocation of IDA resources should reflect the scale and the nature of this crisis and learn from the lessons at the time of the Global Financial Crisis, aiming to reach the countries most affected and with flexible instruments.