The US dollar rose by 5% in trade-weighted terms following the US election of President Trump in November 2016.[1] Since its peak at the end of December 2016, the dollar has reversed all of its post-election rise (see Figure 1).

The continued erosion of expected growth-enhancing policy reforms means that many financial forecasters now expect the dollar to decline further. This could negatively impact US growth while also dampen US dollar prospects – a financial environment exacerbated if President Trump, or members of his administration, continue to argue that the dollar is ‘too strong’. 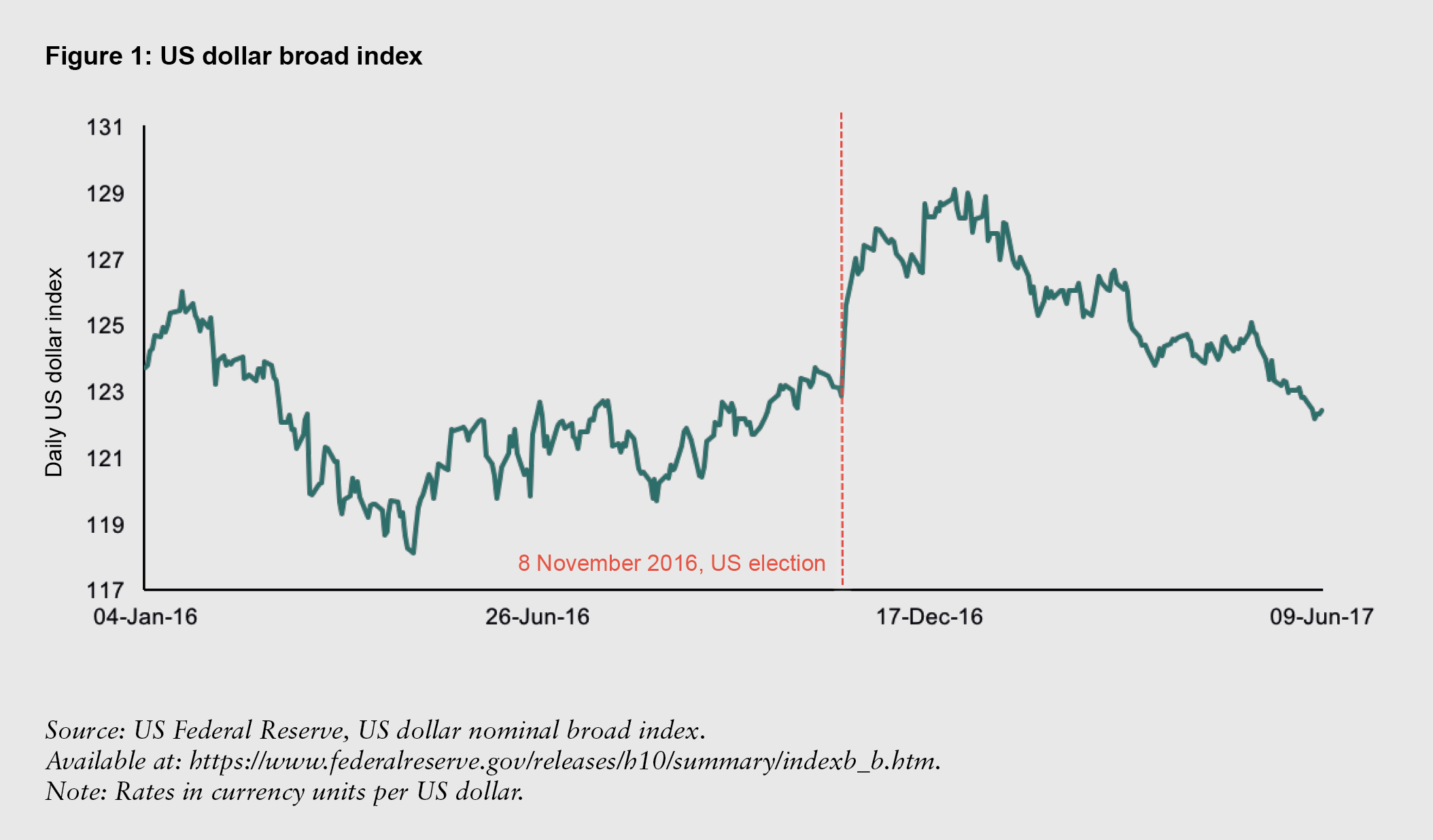 Dollar weakness could have multiple impacts on economic transformation in sub-Saharan Africa (SSA). Some impacts are negative: for example, the value of dollar-denominated reserves held by SSA economies has declined; and SSA’s exports may become relatively more expensive as the dollar depreciates. However, dollar weakness also lowers the value of dollar-denominated debt, which would alleviate some fiscal constraints for highly indebted economies.

Importantly, US dollar weakness is emblematic of a fundamental shift in US growth expectations. This shift could be catalytic for growth and economic transformation in developing countries: if investors’ risk appetite stay resilient, external investment could flow to emerging and developing economies at a time of reduced willingness to hold dollar-denominated investments.

The Overseas Development Institute’s March 2017 Shockwatch Bulletin highlighted the multiple spillover effects already seen in SSA domestic economies, a result of the dollar’s 28% trade-weighted appreciation from 2011 to 2016. These included record SSA currency depreciations against the dollar (including in Ghana, Mozambique, Tanzania and Zambia) and investment outflows, particularly from economies with ‘twin’ deficits in their external current and fiscal accounts (such as in Mozambique and Ghana).

Second, with an uncertain US policy outlook, a reduced willingness to hold US assets could increase investments abroad, particularly in emerging and developing economies offering a higher return. This would benefit SSA economies that have streamlined and transparent investment processes (such as in Rwanda) or resource-related investment prospects targeted to manufacturing growth. Both financial and foreign direct investment inflows could alleviate financing constraints and help to support SSA countries’ economic transformation agendas.

The impact of a weaker dollar, and potentially weaker US growth prospects, depends on governments’ responses.

In some SSA economies where competitiveness has been problematic – such as in Kenya and Rwanda – cost and price reductions would help facilitate a lower REER. This can be achieved in part through deregulation and ending price subsidies in certain sectors. Undervalued currencies, aided in part by central bank intervention, have typically helped growth. In Ethiopia and Tanzania, there is evidence that a weaker REER boosts exports and diversification. By contrast, currencies that are fixed, or managed at an unsustainable rate by central banks – such as in Nigeria – act as a tax on exports exacerbating progress on economic transformation and reducing countries’ foreign exchange reserves.

Equally, when it comes to inward investment into SSA, investment authorities and ministries of finance could play a greater role in channelling financial inflows to support manufacturing in SSA. Financial liberalisation could lead to lower lending rates for firms amid increased competition. It could also result in more favourable financing rates for SSA economies issuing government and corporate debt supporting strategic sectors in the economy to transform growth. Similarly, domestic incentives could be put in place too by investment authorities for foreign direct investment to flow to new industries. This enables diversification, which is particularly important in economies where growth has been largely linked with extractive industry rather than economic transformation.

This series will resume in July 2018. Thank you to our readers for their support.

[1] The broad dollar index is a weighted average of the foreign exchange values of the US dollar against the currencies of the US’s largest trading partners.