Development organisations have spent decades supporting reforms to make public services in Africa more motivated and appropriately staffed, including through increasing pay. Does today’s rising inflation threaten to unwind these pay reforms? What effect might this have on employee morale and government effectiveness? And what can governments do to avert a future crisis in public sector pay?

Many commentators are comparing recent economic developments to the stagflation of the 1970s, when a wage-price spiral triggered by oil price shocks coincided with a slowdown in economic growth. In the 1980s, advanced economies eventually curbed inflation by raising interest rates, but this had further negative repercussions in developing countries. Their currencies depreciated relative to the dollar, making imports more expensive; inflation therefore remained high throughout the 1980s (Figure 1), while debt burdens increased (Figure 2). The rate hikes also depressed global growth, which reduced demand for their exports. Today, the World Bank is raising the alarm, concerned that similar patterns are re-emerging. 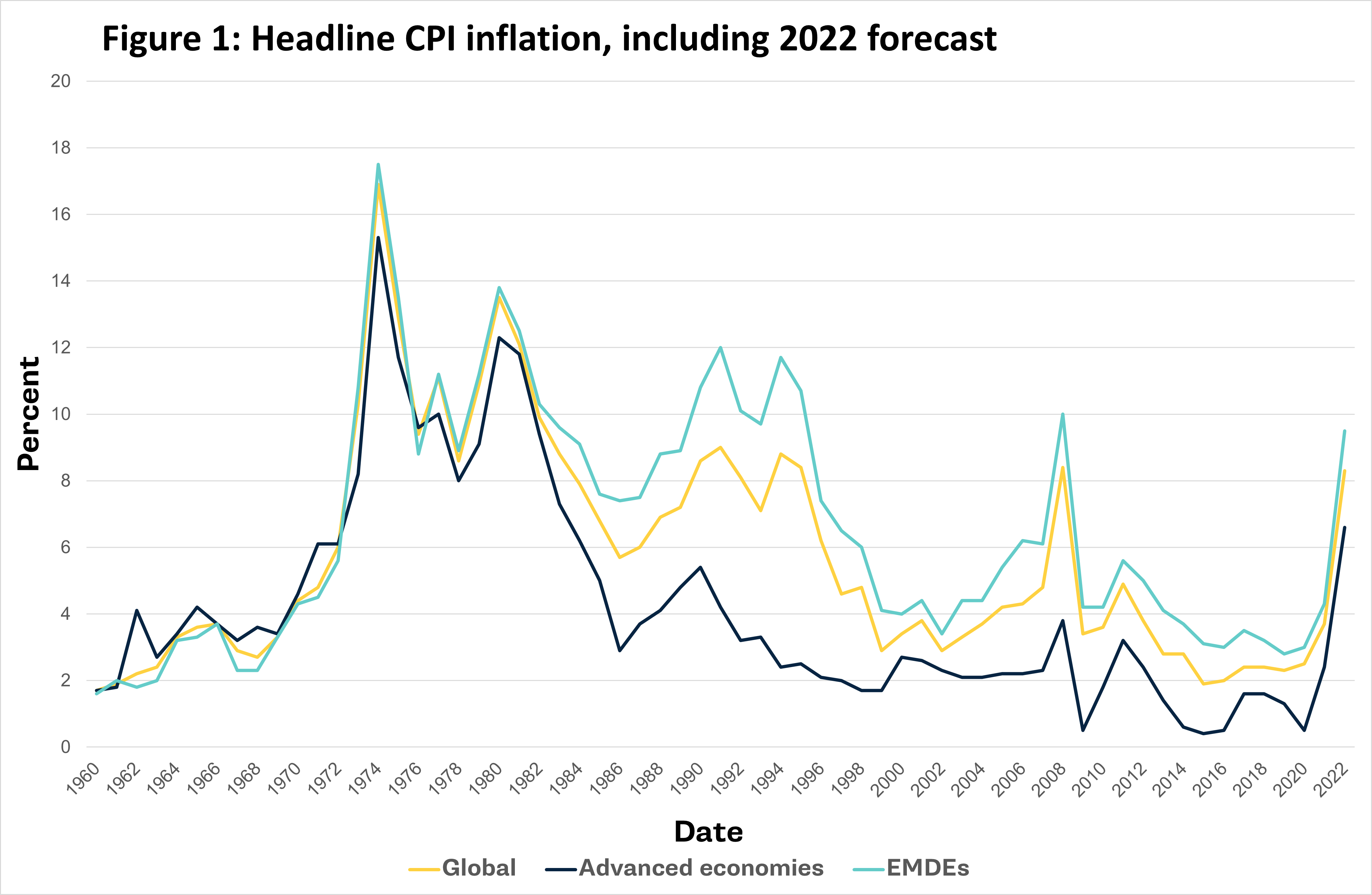 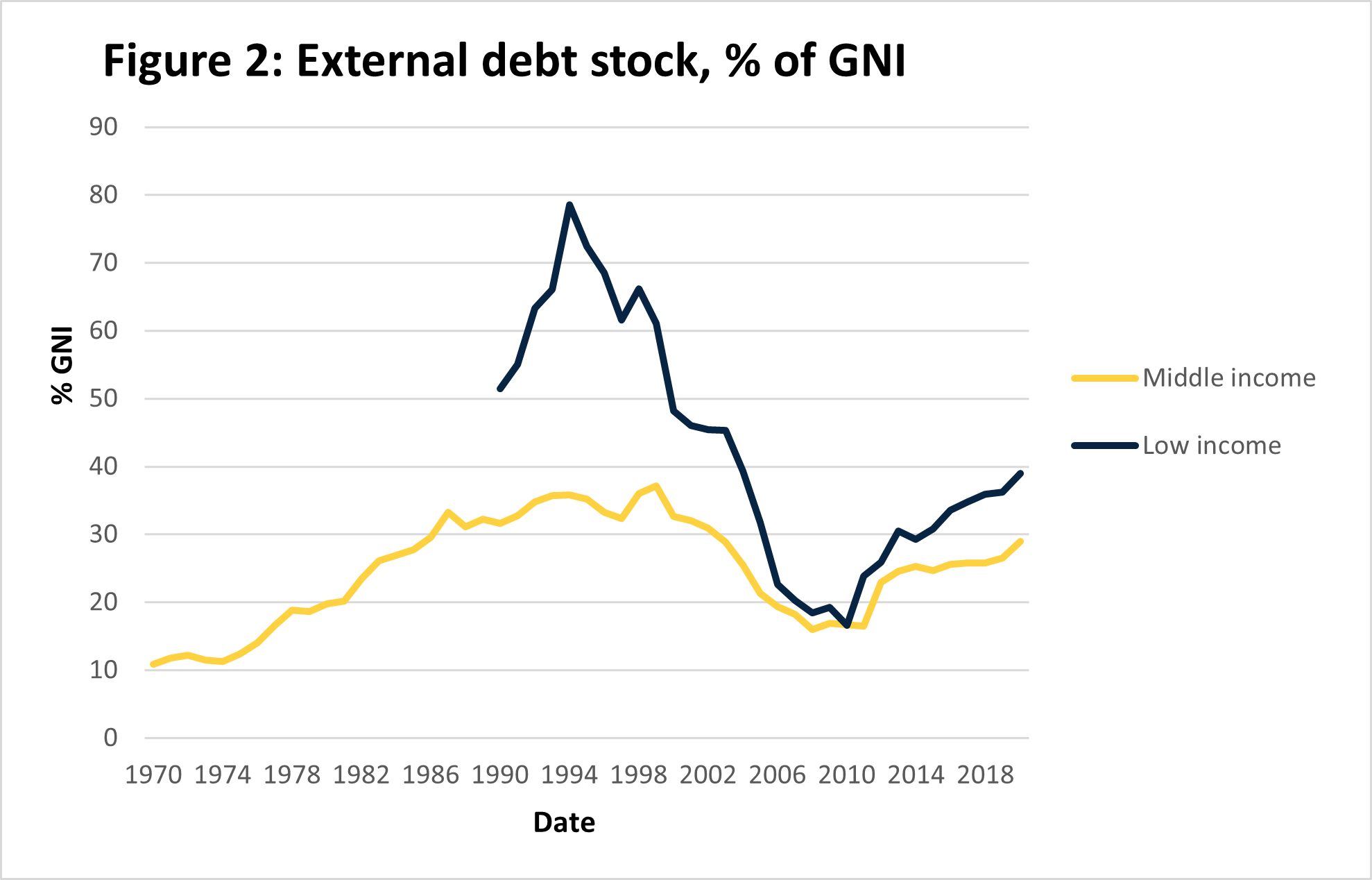 In much of sub-Saharan Africa, the economic shocks of the 1970s and 1980s took a heavy toll on government finances. In Kenya and Tanzania, for example, real government expenditure per capita (excluding interest payments) nearly halved between 1970 and the early 1990s (Figures 3a, 3b). These spending cuts were often disorganised as governments simply held nominal increases below the rate of inflation.

A consequence of this squeeze was a dramatic decline in the real value of public sector salaries. In Ghana, the base salary of a director-level civil servant fell by 90% between 1977 and 1984, while senior officials in Kenya’s civil service saw salaries erode by 80% between the late 1970s and the early 1990s. In Uganda, where the conflict-exacerbated economic crisis was particularly severe, the base pay for an entry-level degree holder in 1990 was $7 per month, while a permanent secretary earned $23. Furthermore, most countries focused on protecting the salaries of low-paid staff, meaning that the highest-skilled workers tended to experience the steepest salary declines.

The timing and severity of these crises in public sector pay differed across the continent. It generally hit harder and earlier in non-oil-producing countries. Countries in the CFA Franc zone had a fixed exchange rate and thus less monetary independence and lower inflation in the 1970s and 1980s. Consequently, real wages declined less rapidly in the 1980s, although salaries did eventually fall in the wake of the 1994 devaluation. These structural differences might well influence outcomes in the future too.

The pathologies of pay decline: absenteeism and allowances

Many observers came to believe that these wage declines were leading to a reduction in work-effort by public servants, the erosion of supervision and discipline, and staff shortages in critical skills categories. Although the evidence was merely circumstantial, it nevertheless pointed to serious motivational problems. In Uganda in the 1980s, government employees spent less than half of the working day on government business, while the rest of their time was spent on other income-generating activities. Evidence from Kenya and Tanzania similarly demonstrated that most public sector employees had secondary incomes, while surveys from the period showed considerable worker absenteeism. There were several contributing factors, of course, but it was hard to see how public sector professionals could prioritise their jobs when their low salaries left them scrambling to meet the most basic trappings of middle-class life.

These wage declines also weakened budget integrity. As base wages fell, remuneration for employees started to leak into other budget categories, and travel budgets and sitting allowances became expected components of pay packages. But this patchwork of incentives was inequitable, unstructured and generally did not compensate fully for the reduction in base salaries and regular allowances. It also tended to direct effort away from desks or classrooms, as financial incentives were often linked to travel, workshops and training.

Compared with the hardship caused by rising food prices on those already at the brink of poverty, protecting the salaries of comparatively well-paid public servants may not seem a first-order concern in development circles. But avoiding a protracted crisis in public sector pay is critical if we want to prevent a reversal of the hard-won gains made in the last decades in the provision of public services. Furthermore, in contrast to the 1980s, the public sector unions of today are more powerful. Wage erosion could therefore trigger protracted strikes.

Governments would do well to immediately begin managing their wage bills as fiscal pressures tighten. History offers four ways to avoid repeating the mistakes of the past.

Communicate wage decline as an intentional policy. With the benefit of hindsight, given that income per capita was indeed falling in many developing countries in the 1980s, some decline in public sector salaries was necessary. Fully compensating workers for rising prices would have been unaffordable and inequitable. Today’s terms of trade shocks may again require real wage adjustments. Governments should communicate this to the civil service as an intentional policy, where public sector workers share in the burden of adjustment in solidarity with the majority of self-employed workers who likewise face reductions in income.

Adopt more nimble approaches to wage adjustments. Historically, many governments have set pay scales in nominal terms, which are then adjusted through periodic, time-consuming and costly salary reviews. Consequently, salaries have often oscillated sharply, falling in periods of high inflation and then rising a few years later after a salary review. If not already in place, the government should designate a department or unit with the responsibility for monitoring real wages and recommending annual pay increments. To avoid swings in real earnings, governments should institute mechanisms that allow for annual adjustments to nominal pay in a nimble, yet considered, way. For example, one intention behind Ghana’s 2010 single spine salary structure was to centrally negotiate the ‘base’ pay, which then shaped the pay scale across the public service, reducing the number of annual pay negotiations.

Pre-emptively reduce the rate of new hiring in anticipation of a wage bill crunch. While stop-start hiring practices and employment freezes are far from desirable, they are probably less damaging than rollercoaster wages. To limit the damage of employment freezes, governments may want to consider policy mechanisms that allow them to transfer staff easily across agencies or facilities so that teachers or health workers can move swiftly between schools or clinics, for instance.

Transparency in selective-salary protection. In the case of a severe and protracted crisis, it may become necessary to protect salaries in certain critical government functions. If so, it is advisable to establish an orderly and transparent mechanism through which to augment wages in strategic units. Donor support for bonuses or top-ups, for instance, may be useful if it helps to reduce domestic political opposition to what is in essence an inequitable policy.