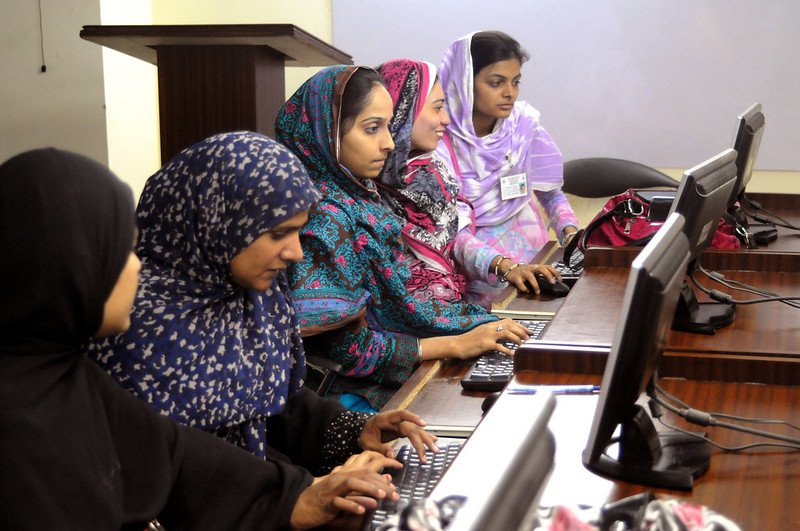 Pakistan’s low-level skills trap has gained a lot of local media attention in recent years. Stories about the enormous skills gap and a national emergency in skills development have prompted debate within the country about the future of its skills and the future of its youth. Nearly half of Pakistan’s working-age population (defined nationally as 10 years or older) is illiterate, around 30% have secondary education and another 5% hold university degrees. Most jobs are informal – more than three-quarters in the countryside, and over 60% in urban areas. The skills development agenda has therefore become a major development priority.

The National Skills for All Strategy led by the National Vocational and Technical Training Commission recognises the challenges involved in developing technical and vocational skills (commonly known as TVET), including ’limited training capacity, outdated workshops and laboratories, obsolete training equipment, archaic teaching methods and antiquated curricula’ – areas which it states can be improved with adequate investment from both the public and private sectors. Pakistan also has the financial and technical support of development partners such as the European Union, GIZ and the World Bank. Yet despite recognition of the problems in skills development, the policy response remains weak.

Formal skills training is limited. There are just 3,500 TVET providers in the country. In 2018, they enrolled just over 433,000 students. Fewer young women enrol in TVET, in part due to an emphasis on trades more commonly associated with men, cultural barriers and lack of exposure to training in a co-working environment.

Most skills training is informal and on-the-job. Young adults often gain on-the-job training from traders such as mechanics, electricians and plumbers, and from artisans such as wood-workers, painters and potters. This informal system of training is common in more precarious forms of employment, where young people are likely to face dangerous working conditions, earn low wages and enjoy little job stability or mobility.

How ‘leave no one behind’ framing can improve interventions

These are just some of the very long list of challenges confronting Pakistan’s skills development agenda. The problems may seem insurmountable, but I believe a framing like leave no one behind will be extremely helpful in designing and implementing interventions that more explicitly target particular groups.

While it is a central commitment in the Sustainable Development Goals, this framing also has a much broader use. It is designed to address several related concerns: ending absolute poverty – in all its forms – and ensuring that those who have been ‘left behind’ (in relative or absolute terms) can ‘catch up’ with those who have experienced greater progress; reducing the group-based discrimination that has resulted in unequal outcomes for some disadvantaged or marginalised populations; and prioritising and fast-tracking action for the furthest behind.

As ODI’s latest study on developing young people’s skills in Pakistan finds, using the leave no one behind framing would help policy-makers identify at least five disadvantaged groups that could  benefit the most from more immediate interventions and policy prioritisation: women, workers from rural areas, informal workers, youth and migrant workers.

First, skills development focused on women can help them become more independent intellectually, as well as financially. Professional training can help women overcome barriers to career growth. Such approaches could include vocational programmes and awareness campaigns about women’s legal rights at work, and how to access quality employment and form interpersonal relations that encourage women’s empowerment.

Second, skills development for social groups such as those from rural areas and those susceptible to exclusion from the training and broader education systems would help reduce disparities in access to training and help these groups catch up.

Third, skills development for informal workers would help them move into better-paying and more formal jobs and protect them from poor working conditions, low wages and the low-level skills trap – problems which under current conditions they find hard to escape.

Fourth, skills development interventions that encourage entrepreneurial activity could be more inclusive of youth from different economic and educational backgrounds and geographic locations. Initiatives could aim to train young people in marketable skills such as oral and written communication, presentation techniques and report writing, as well as on the financial aspects of running a business, ensuring fair wages and protecting workers’ rights, profit maximisation and investment methods.

Fifth, skills development for migrants would enable them to find better jobs abroad and protect their rights in destination countries.

As policy-makers continue to roll out skills development interventions in Pakistan, I hope they will consciously target these five left-behind groups and adopt the leave no one behind framing in the country’s skills development agenda. This would help make these efforts truly transformational and enable Pakistan’s people to engage in more meaningful jobs and careers.

The ODI study Pakistan: developing skills in youth to succeed in an evolving South Asian economy was launched at this year’s South Asian Youth Skills and Solutions Forum in Mumbai in October, and has its country-level launch at the regional Sustainable Development Conference in Islamabad in December 2019.