Japan, Germany, South Korea, Israel – all of these countries are key economic and security partners of the United States. Yet these critical American allies have something else in common. They were primary recipients of American foreign aid for decades after World War II.

India, South Africa, Brazil, Indonesia – these rising nations have dramatically reduced poverty, supported regional security and become foreign aid donors in recent years. The US supported these achievements though not entirely selflessly, as it came to benefit from all of these burgeoning economies vastly increasing their imports of American goods and services.

If President Trump follows through on his plans to slash the aid budget, he risks depriving America and the world of these types of success stories in the future.

Impressive a track record as they have, US aid and diplomacy cannot solve all the world’s ills. They’re also not trying to – the American government first and foremost serves its citizens and national interests.

But US taxpayers should be confident that a government dollar will be well-spent on delivering aid for two main reasons. Firstly, funding for aid programmes is some of the most scrutinised spending in the federal budget. Secondly, the top two places in last year’s Federal Invest in What Works Index are both occupied by foreign assistance agencies: the US Agency for International Development (USAID) and the Millennium Challenge Corporation.

Value for money aside, the results themselves tell an amazing story about aid. American assistance literally saves millions of lives a year. This is not hyperbole. To share just one amazing statistic, since 2000, over six million lives have been saved in Africa due to a 50% reduction in malaria alone. Significant funding and innovation from the US played a vital role in making this happen.

An aid budget that is just 1% of the entire federal spend has helped pave the way to momentous successes in improving literacy, creating more opportunities for girls, combatting human trafficking, lowering rates of maternal mortality – alongside wins against malaria. Yet President Trump has cast doubts on the future of aid funding, while calling 'for one of the largest increases in national defence spending in American history'.

Yet we know from hard experience that spending on security is really only effective when accompanied by support for good governance, effective institutions, and poverty reduction. When was the last time we went to war with a well-governed, prosperous country?

When was the last time we went to war with a well-governed, prosperous country?

Rather than conflict with democracies the US has helped build up, the main threats facing the country come in the form of: economic stagnation, pandemics, violent extremism, and climate change. None of these dangers can be prevented by walls. Bombs and tanks will not be much help in stopping them either.

In reality, our ability to deal with every one of these problems requires strong cooperation with partners around the world. The military certainly has a role to play but they themselves believe that development organisations 'are critical to preventing conflict and reducing the need to put our men and women in uniform in harm’s way', as over 120 generals put it in a recent letter to Congress.

Or as now Secretary of Defence James Mattis once said, 'If you don’t fully fund the State Department, then I need to buy more ammunition.'

Ultimately, US security interests are best served when the country’s leaders confront the biggest global challenges with partners who share its values, as well as the burdens of maintaining them. Americans thrive when freedom and inclusive economic growth are on the rise globally.

History holds cautionary tales for American leaders tempted by isolationism. Living in Afghanistan and Pakistan in the 1990s, I saw first-hand the destruction and desperation that followed the US turning its back on the two countries after the Cold War. Afghanistan and Pakistan needed access to a path of stability and prosperity, not the weapons and ideology they got instead. We are still paying the price.

Living in Afghanistan and Pakistan in the 1990s, I saw first-hand the destruction and desperation that followed the US turning its back on the two countries after the Cold War.

He may not have mentioned them in his first address to Congress but President Trump still seems to be planning massive cuts to development and diplomacy – despite fierce opposition. If he carries through on his plans, they will not only lead to a loss of life among the neediest in the world, they will also undermine American power, progress and prestige.

Instead, he should look to support people like the woman I recently visited on a return visit to Afghanistan who has gone from being a refugee to a teacher to a parliamentarian. She gave up a chance to emigrate to Europe because she was committed to rebuilding her country – in part because America had supported her on that journey. President Trump should lead his country in continuing to stand by her now. 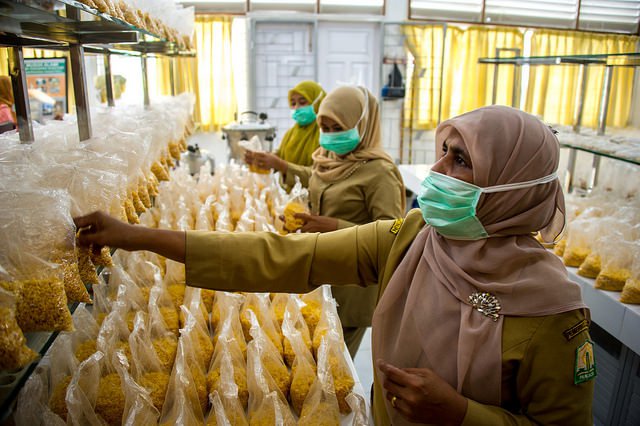