In the last decade, €896 million of public funding was channeled through 1,000 contracts to 350 companies involved in the Spanish migration control industry. These companies both run the machinery, and profit from it. How these companies use and exploit the industry will have long-term effects on any sensible, global migration policy.

It is extremely difficult to track the total amount spent by the EU on the migration control industry. In 2016, we estimated that at least €17 billion had been spent on border control in the previous two years. But the industry is much broader than that. In Spain, money is spent on four areas:

Recent research from porCausa looked at the first two areas, which make up over 97% of the resources channeled through 943 public contracts. The money mostly comes from different European Union (EU) funds, such as External Borders, Return, Internal Security, and Asylum, Migration and Integration. It also comes from Frontex, and Spanish Government investment, through the co-funding of European funds and the construction of infrastructure.

The most expensive activity seems to be developing technology for border surveillance. Deportation flights also stand out, as does the management of detention centres and temporary reception centers for newly arrived migrants. 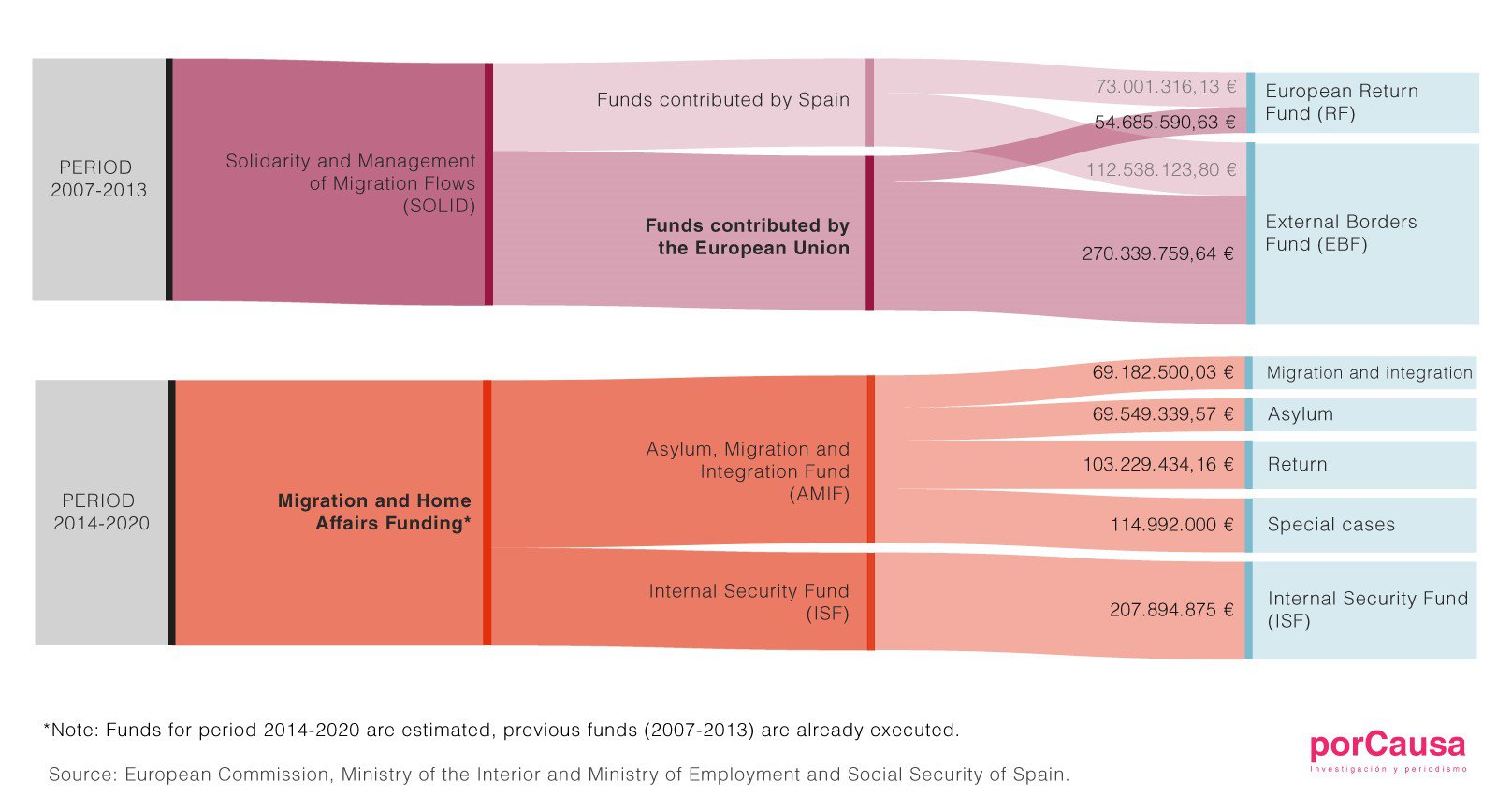 In principle, the objective of the industry is not just to stop migration. Save and rescue operations, for instance, are an integral part of the surveillance mechanisms. In practice, however, the industry prioritises the control and deterrence of migrants over any other consideration.

Between 2005 and 2007, almost 70,000 migrants landed in Spain. As a result, resources channeled towards border deterrence and rhetoric from European public officials increased.

Yet there is no evidence that investment in the industry has produced the desired effect of deterring irregular migration. Migrants merely switched from the Canary Islands route, to more expensive and riskier land routes through the Sahel. Since then, this ‘Western Mediterranean corridor’ has remained active. Numbers may even increase if the route through Libya is closed.

Rather than reducing migration, research indicates that the industry has multiplied the legal, economic and personal risks associated with mobility. This has led to a humanitarian crisis, and suggests that the mandate of the industry is first to combat alleged threats at the border, then to rescue people. More broadly, similar trends across Europe – increasing externalisation and securitisation – have impacted relationships with poorer countries.

Of course, it is possible that the power of these companies in Spain could lead to the capture of policy and public opinion. In the last decade, just ten companies received over half of the total resources allocated through public procurement. These ten companies have the potential to exert massive influence. This is similar to trends observed in the defense industry.

We need a much better understanding of the migration industry. Not just in Spain but across Europe. It is critical that we understand the role of other actors, including NGOs, operating in the reception-integration and externalisation areas of migration control. Without this analysis, it is unlikely we will be able to establish a fair, efficient and sustainable global migration policy that also has public buy-in.