Finance ministers, central bankers and development agencies are gathering this week in Washington DC for the spring meetings of the IMF and World Bank. The global economic backdrop is worrying. With the IMF revising its global growth forecasts downwards, international trade in the doldrums, and a large group of emerging markets and developing countries hit by low commodity prices, demands on World Bank and IMF resources are growing.

While these issues are in the media spotlight, less attention has been directed to some of the urgent challenges posed by the Sustainable Development Goals. These include delivering the development finance needed to fund infrastructure to support transformative economic growth, create jobs and support a low carbon transition – and to reach people affected by conflict and state fragility.

ODI researchers have been contributing to debates in these areas. Here, ODI’s Director, Kevin Watkins, interviews Mark Lowcock, Permanent Secretary at the UK’s Department for International Development (DfID) on some of the issues at stake. 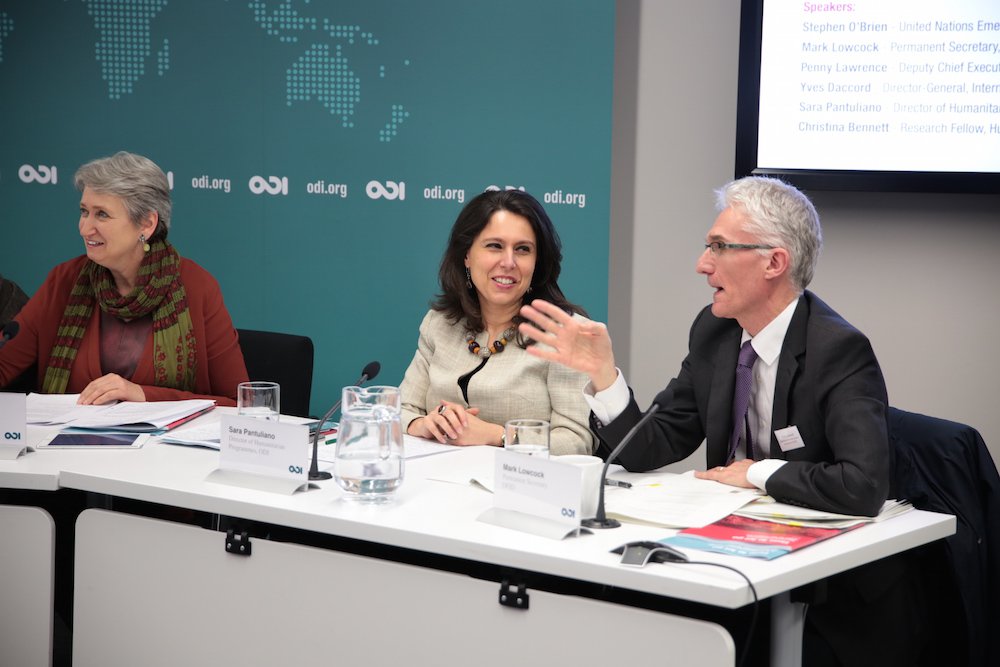 KW: Before getting on to some of the specific financing questions, what do you see as the core structural challenges facing the World Bank – and what type of finance does it need to deliver to meet these challenges?

ML: In the midst of a global slowdown, plummeting commodity prices, increasing financial volatility, and stresses caused by conflict and refugee flows, three types of countries need the World Bank – and indeed the regional development banks – more than ever.

1. The poorest and most fragile countries, where the deepest levels of poverty lie, and where over 60% of the world’s poor are projected to live in 2030 (e.g.  South Sudan, the Sahel). Most of these countries overwhelmingly need grants or interest-free loans.

2. Poor countries which have been doing relatively well, are creditworthy enough to borrow more from the Bank, and could do so at the 4% fixed rates currently prevailing but who are currently locked out of this kind of finance from the Bank. Some of them have been borrowing on the international capital markets at much higher interest rates – up to 11%.

3. Countries which are going backwards, or risk doing so, in the face of shocks. They include:

Normally such countries would have a range of options to help them through difficult times – their own resources, donor funds and private sector credit. But the combination of the global downturn, economic uncertainties and huge humanitarian and refugee costs being faced by the world mean that these traditional options just aren’t there at the scale needed.

The international development system is also proving itself poorly set up to support countries suffering unexpected reverses or collateral damage from conflict in their regions.

How should the World Bank be responding? And does its financing portfolio reflect the needs of its client base?

This is a critical moment for development financing in many countries and an opportunity for the World Bank, which is in a position to provide finance at scale, combined with world-class expertise and advice. But it needs to change if it is to seize this opportunity – and secure its place as the pre-eminent development finance institution in the medium term.

The starting point is for the World Bank to use its money where it’s needed most.

This has proven an excellent way of leveraging smaller volumes of public finance into much larger flows for development.  IBRD has been successful with a broadly one-size fits all, first come, first served model which does its best to meet demand but which is careful not to take on too much risk.

But it now has a far more diverse set of clients, with different needs, levels of wealth and ability to borrow on the market. It needs a more strategic approach to allocating money, which makes trade-offs about how best to reduce poverty whilst maintaining a healthy balance sheet.

It could provide higher volumes at relatively lower prices to those which are more creditworthy than they used to be but still have high levels of poverty and difficulty accessing the market at reasonable prices.

It also needs an appealing offer to wealthier clients, many of whom are investment grade, so have more alternatives. This could involve a more tailored offering on knowledge and instruments, but perhaps at somewhat higher rates for those who can afford to pay or want to borrow more than their fair share.

The cheapest loans and grants provided by the Bank – through the IDA window, established some years after IBRD – were meant to help countries that were not creditworthy enough to borrow on IBRD terms.

But a relatively high weighting on past performance has skewed resources away from countries with the deepest and most stubborn poverty.  And the existence of the IDA window has had the unintended but perverse effect of limiting the access of those countries getting more creditworthy, who would like to borrow larger volumes even if at slightly higher prices, to IBRD. So they have been competing with the really poor group for the limited IDA pot.

A rough modelling of how current allocations compare to allocations focused on poverty and a country’s ability to finance their own poverty reduction shows 46% of IDA finance should be going to poorer countries. The Bank should increase the volume of slightly more expensive finance available to well performing and increasingly creditworthy countries which can afford to borrow at higher rates, in order to free up more of the cheapest finance for those who really need it most.

The system has also failed to reward countries turning themselves around after years of conflict and poor governance, or surge support to countries at risk of sinking into conflict and violent extremism. Money from the Bank’s private sector financing arm, the IFC, is also failing to do its job of drawing in private investment to these toughest markets, with fragile states making up only 4% of the current portfolio and the poorest countries only a further 6%.

The share of both IDA and IFC resources to fragile states should be much higher. On top of the question of resources, neither the Bank nor IFC’s operating models have proved themselves well-adapted to working in fragile and conflict affected states.

The Bank’s country-by-country approach is good for many things. But it doesn’t work for allocating money and brain power to dealing with the causes and consequences of the ever-growing number of cross-border problems the world is facing.

This has been most visible this year in the context of the refugee crisis. It took great leadership by President Kim to find just $200m of the Bank’s own resources to support Jordan and Lebanon offer Syrian refugees better job and education opportunities.

Other global and regional issues, ranging from pandemics to climate change to shared water resources, suffer from the same problem. We need to increase support to countries investing in these issues, including using the Bank’s own income to offer better terms when there are benefits to the region or world as well as to the country.

Some people think that the best way to do that for the better off countries is to sweeten IBRD money with donor grants.  But because of all the pressures globally on ODA, that risks being at the expense of flows that would otherwise go to the poorest countries, which ultimately could be counterproductive.

Turning from financing to delivery, the World Bank is sometimes viewed in developing countries as a good but somewhat slow-moving and inflexible partner. Is that assessment fair?

The Bank certainly needs to be faster and more responsive.

Its often unfathomable and bureaucratic processes – often imposed by its shareholders – have long been a source of frustration for its clients. It’s becoming essential that the Bank breaks free of these.

Of course, the Bank needs to continue to do development well, taking the time needed to develop high quality projects which meet good standards. Clients’ own systems can cause some of the delays. But the Bank and IFC recognise they can do much more to speed up approval processes and fast-track lower risk, simpler projects, especially in high capacity countries.

‘Simplification’ of processes was one of the top demands from the Bank’s own staff in last year’s staff survey. This is partly about less-burdensome systems. But it’s also about empowering staff: giving them the space and support to make judgements and innovate, holding them to account for results and learning from rather than punishing failure.

And it’s about getting closer to the client, physically and in terms of understanding and responding to their needs and circumstances on the ground.  These issues are not unique to the Bank: you are all familiar with our efforts to address them in DFID too.

What about the resources available to the World Bank and the question of capitalisation?

On the basis that the Bank can allocate, manage, price and leverage its resources well, and be faster and more responsive, its members should capitalise it better.

Over the last 40 years, Bank lending has increased around five times in nominal terms. But the world economy has grown 13 fold. And, as I was reminded recently, in real terms IBRD has typically lent less in recent years than it did in 1979. IDA has grown over the last 15 years – but much of that has been financed by reflows – i.e. the borrowers themselves.

So whilst the challenge remains great, the Bank is a much less significant player than it used to be or we would like it to be. IBRD allows us to leverage our public funds up to five times, and that is enormously valuable in financially constrained times when interest rates remain very low.  IFC not only has the same model of leveraging paid in capital, but also mobilises an additional 70p of private finance for every public pound they invest.