In 2017, Femicide Watch recorded a total of 87,000 women intentionally killed. Among them, more than half (58%) were killed by partners or other family members, and more than one-third were killed by their partner. This means that on average, 137 women across the world are killed by a member of their own family every day. In France alone, 131 cases of femicide were logged since January 2019.

Experts say that thanks to the 1995 Beijing Declaration and Platform for Action, violence against women is now discussed openly and is no longer viewed solely as a private family issue. However, the increasing amount of research and funding for programmes to prevent such violence also highlights how severe the problem still is. 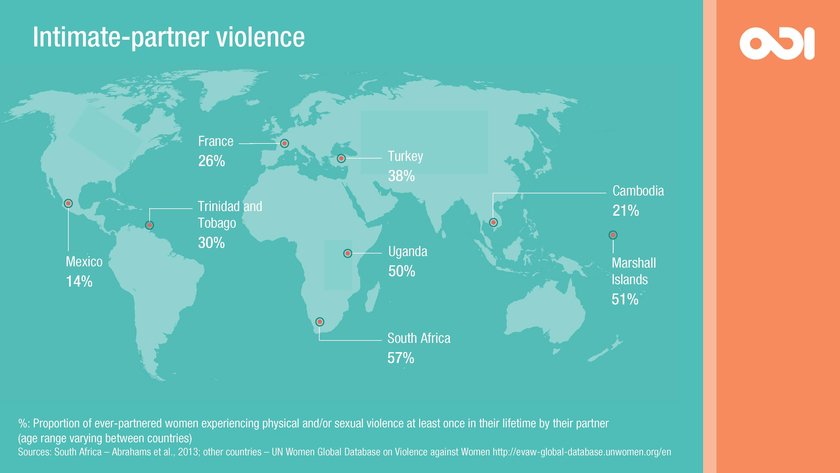 Has violence against women and girls increased since the 1995 Beijing Platform for Action?

With new communication technologies, violence against women and girls is reported more frequently, with many high-profile cases in the media. Social media is playing a major role in raising global awareness of the scale of abuse faced by women and girls at home, school, work, on public transport, in the entertainment industry – and even at high profile events such as UN climate negotiations. Under the Me Too movement, for example, hundreds of thousands of people reported online having been sexually harassed or assaulted.

However, an increase in the rate of reporting does not necessarily mean that violence against women and girls is increasing. The 2014 UN review of the implementation of the Beijing Declaration flagged that the limited availability of data and challenges in comparing contexts undermines the possibility of a global analysis of trends over time. Violence affecting sexual and gender minorities is also far from being accounted for.

A better and more systematic way of accounting for crimes, including sexual offences such as rape, can help make statistics more accurate. A UK study (PDF) shows that domestic violence and violence against women has increased since 2009, so much so that it has pushed up overall levels of violent crime – whereas violence against men continues to fall.

The drivers behind male violence

Discriminatory attitudes and social norms are major drivers of gender-based violence where the primary victims are women, sexual and gender minorities, and the perpetrators are predominantly men. Factors associated with men's use of violence include rigid gender attitudes, work stress, experiences of violence in childhood, and alcohol use.

A 2015 study based on data from 44 countries, revealed how societal norms supporting male authority over women and discriminatory ownership rights, were predictive of the prevalence of physical and sexual partner violence.

In other words, the more gender unequal a society is and the fewer rights women have to own property or land, the more likely they are to experience physical or sexual abuse by their partner.

ODI’s research in Bangladesh shows that violence perpetrated by partners is also driven by today’s perceptions of male disadvantage, and by men’s resulting fears about loss of power and control. The importance of educating and working with men, particularly with young adolescents, cannot be over-emphasised.

Is there room for optimism in the short term?

More worrying though, is the number of extreme cases of violence stemming from male retaliation that are uncovered or reported daily. Last April, an 18-year-old madrasa girl in Bangladesh was burned alive after filing a complaint against her school’s director for sexual harassment.

In our recent research in Chad, accounts from both men and women revealed truly horrific cases of girls being killed by their fathers for refusing an arranged marriage, or an adolescent being sentenced to jail, or worse, after abandoning a newborn baby – a consequence of her rape. Everywhere, women who transgress norms or speak out risk facing backlash and more extreme violence.

Since Beijing, two-thirds of countries have adopted laws to stop domestic violence, and the issue is highly present on the development aid agenda.

And yet, survivors are still often blamed for the way they dress, speak or behave to justify the use of violence. They do not benefit from adequate levels of institutional support and the majority are still afraid to report abuse.

The fight against the violation of women and girls’ rights might find solace in demographic changes where new generations of girls and boys with higher access to school, education and information and less discriminatory attitudes will slowly but surely transform social norms. But actively changing norms is also necessary to promote gender-equitable education.

For this to happen, it is the responsibility of governments to urgently make gender equality in education a priority. Meanwhile, civil society, particularly women grassroots organisations, must keep the pressure on – and the media must be their ally.