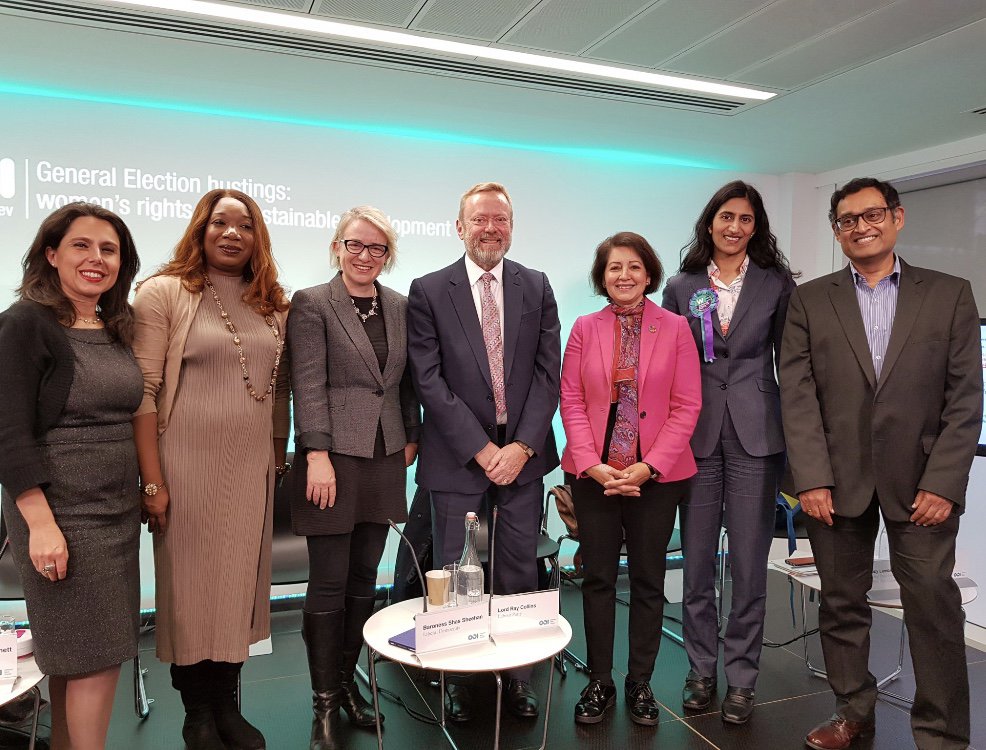 In less than a week the UK will go to the polls. This General Election is set against the backdrop of Brexit, with ongoing debates over Britain’s place in the world. Within these debates, however, the UK’s role in building a sustainable and peaceful world seldom features.

That’s why, together with ActionAid UK, ODI convened a hustings event for political parties to outline their priorities for women’s rights and sustainable development. Despite the lack of attention these issues routinely receive, there was standing room only, indicating that there is real interest in how the next government will address them.

Since the hustings, parties have released their manifestos. Here are four key takeaways on their proposals for sustainable development:

Despite some negative news headlines about the aid budget, there is consensus across the main parties (including Conservatives, Labour, Liberal Democrats and SNP) that the UK’s commitment to spend 0.7% of gross national income on overseas aid – currently enshrined in law – should be maintained. The outliers here are the Greens who propose increasing spending to 1%.

Labour and the SNP also argue that the Department for International Development (DFID) is best suited to spend development aid, with Labour indicating that DFID could have greater oversight over aid spent by other departments. Meanwhile, the Liberal Democrats argue that asylum policy should be added to DFID’s responsibilities.

With climate change having risen dramatically up the political agenda recently, it is little surprise that unlike previous elections it features heavily in most of the manifestos.

Labour pledge to put climate diplomacy at the heart of foreign policy – and the Foreign Office – using international fora (including the UN Climate Summit in Glasgow next year) to promote policies to address climate change and deliver more ambitious global targets.

The Conservatives, meanwhile, restate their intention to deliver on the UK’s commitment to achieve net zero greenhouse gas emissions by 2050 and note that they have doubled international climate finance. They propose using next year’s UN Climate Summit in Glasgow to ask others to match their ambition.

The Liberal Democrats say that they will argue for an end to fossil fuel subsidies worldwide and provide aid to developing countries to help them transition to clean sources of energy. They add that they will play a leading role in international efforts to address climate change – reducing UK emissions, increasing development spending on climate and using the Glasgow Summit to persuade others to commit to net zero climate goals by 2020.

A recurring feature of UK aid, the main parties all include priorities for spending on health and education.

The Liberal Democrats commit to developing a global education strategy to address the crisis of 263 million children missing out on school. Alongside this, they commit to prioritising gender equality; including through education and training, extending reproductive rights, ending female genital mutilation and ending sexual violence in conflict.

The Conservatives also note education, stating that they will stand up for the right of every girl to have 12 years of quality education. In addition, on health, they state that they will end preventable deaths of mothers, new-born babies and children by 2030 and play a leadership role in eradicating Ebola and malaria.

Labour propose establishing a new Unit for Public Services within DFID to increase direct budgetary support to governments so they can build sustainable education and health services. Moreover, they say that they will promote fairer patent regimes to improve access to medicines and in the long term, ensure all medicines developed with UK taxpayer support are accessible to people in the Global South.

Further to their prioritisation of gender equality, the Liberal Democrats pledge to protect and promote human rights, including for LGBT+ individuals. They add that they will develop a strategy for promoting decriminalisation of homosexuality around the world and advancing LGBT+ rights, as well as appointing a Champion for Freedom of Belief.

Addressing the same themes, the Conservatives state that they will host the UK government’s first ever international LGBT conference and will seek to protect those persecuted for their faith. Similar to the Liberal Democrats’ prioritisation of gender equality mentioned above, Labour commit to implementing a gender transformative approach across all international engagement, including tripling funding for grassroots women’s organisations.