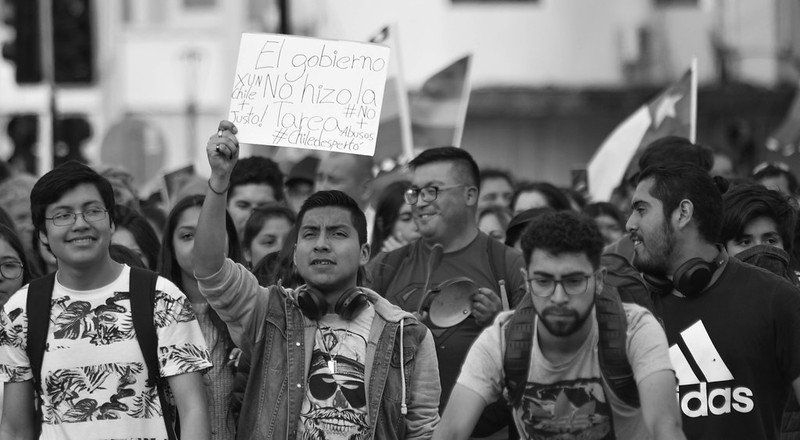 The world is in a state of rage, with people taking to the streets from Chile to Lebanon to Bolivia just over the past several weeks.

In each case, the proximate triggers are different. In Chile, it was a suggested hike in transport fares; in Lebanon, a proposed tax on WhatsApp calls; in Bolivia, concerns of electoral fraud.

At their heart, though, these protests all come back to similar themes: frustration with political elites that are seen as irredeemably corrupt and out of touch, and growing disenchantment with political systems that, while ostensibly democratic, are perceived as dysfunctional and unable to deliver on the needs and aspirations of their citizens.

How can we make sense of this unrest? People are angry, and they want to be included – in terms of both whose voices are heard in decision-making processes and how the benefits of development are distributed.

Over the past 30 years the world has become a lot more prosperous. Poverty rates are at an all-time low, and well-being, especially in relation to health and education, has improved dramatically. However, such progress has not been shared evenly.

The widening chasm between the haves and have nots has turned into a potent rallying cry for discontent and mobilisation, often galvanised around identity-based cleavages.

In Chile this is playing out along class lines, with growing pockets of the population deeply disappointed that they continue to be denied access to “the promised land of middle-class status”.

In Lebanon, the confrontation is along generational lines, where for the first time since the country’s civil war people are coming together in ways that transcend sectarian lines to demand better services and other needed reforms from the state.

Why is inequality and social exclusion so harmful?

Such mobilisation and contestation can be essential in deepening the quality and substance of democracy – this may well be how democracy “gets real”.

However, where inequalities and social exclusion feed divisions that get entrenched along opposing and uncompromising blocks, polarisation becomes a more acute challenge that tests the resilience of democratic governance across both the developing and the developed world. This seems to be happening in Bolivia between camps in favour of and against exiled President Evo Morales, as well as in countries from India and Mexico to the UK and the US, where the appeal of populism has also been on the rise.

Growing inequalities further exacerbate divisions and fragmentation by creating imbalances in access, voice, representation and opportunity that disenfranchise segments of the population and undermine trust in democratic institutions.

For example, an uneven playing field gives outsized say in policy- and decision-making processes to those with the means to exert it. As experience in countries as diverse as Colombia, the Philippines, and the United States suggests, the wealthy are often able to leverage their resources to influence the content and implementation of policies, ranging from tax policy to healthcare coverage to land reform, in ways that ensure their interests are not threatened.

Inequality also skews the provision of essential services away from those who need them the most.  This creates an enormous social distance between different groups, despite their (often close) proximity. The fire that engulfed the Grenfell Tower public housing block in one of London’s wealthiest boroughs is a particularly stark illustration of this.

So what can be done?

Two crucial priorities emerge from the analysis above:

And yet, this is much more easily said than done. As we know from history, addressing the dual challenge of promoting more inclusive processes and more inclusive outcomes is extraordinarily complex. For one thing, fostering inclusion in terms of process does not automatically help democracies deliver in more inclusive ways.

Brazil offers a powerful illustration of these dynamics at work. Under the leadership of the Partido dos Trabalhadores  (PT) over the past two decades, the country made enormous strides in terms of both promoting participation (pioneering, for example, experimentation with participatory budgeting), and implementing programmes like the Bolsa Familia on conditional cash transfers to tackle inequalities.

However, corruption also thoroughly pervaded the system, brewing discontent and polarisation. This provided fertile ground for a backlash against the PT, which the newly elected President, Jair Bolsorano, has capitalised on – while embracing a populist agenda that is likely to be far less progressive, inclusive and redistributive.

And yet, no matter how difficult, it is essential that we strive to promote greater inclusion in both process and outcome, because the very survival of democracy is at stake.