As emerging economies rise, rich countries have started calling on them to contribute to development finance. After all, these countries are now significant global powers and key players on financing and related policy issues. Many already have significant development assistance programmes, a form of cooperation commonly called South-South Cooperation (SSC).

The debate comes to a head at the Financing for Development (FfD) Summit in Addis Ababa in July 2015, where governments will hammer out new commitments to mobilise development finance to achieve the Sustainable Development Goals after 2015. Wealthy countries may well ask emerging economies to contribute as a quid pro quo to their own commitments – for example, to reaffirm and set a timeline for meeting the 0.7% Official Development Assistance (ODA) target.

Jeffrey Sach’s Sustainable Development Solutions Network (SDSN) has already made one concrete proposal in this direction (pdf): for all Upper Middle Income Countries (those with per capita incomes of $12,476 and above, which currently includes China and Brazil, but not India) to commit to providing 0.1% of their national income as development cooperation.

So, what are the prospects for agreement on such a proposal?

The 0.1% proposal is a big step, but not impossible

This is the best available information on the levels of development cooperation currently provided by the ten largest UMIC economies: 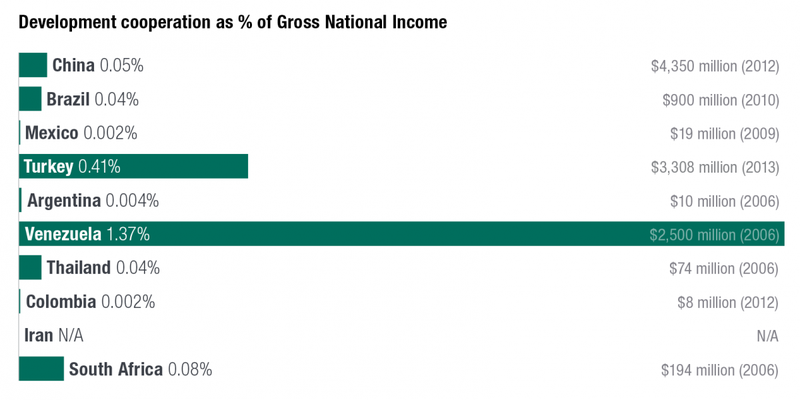 Two of these countries, Venezuela and Turkey, may have already met the 0.1% target; South Africa, China and Brazil are well on their way to meeting it. However, that still leaves Argentina, Colombia and Mexico, as well as the other 45 countries in this group – the vast majority of which don’t have development cooperation programmes – for whom this target would require a very substantial additional contribution of resources.

Giving these countries a reasonable timeframe in which to meet this target would help to ease fears about implementation – the 0.7% target was first endorsed in 1970 with a deadline of the end of the 1970s. Countries would also not necessarily need to set up development agencies, as they could simply make contributions to multilateral development agencies. But in any case, a 0.1% of GNI target will represent a significant departure from the status quo for most UMICs.

But are emerging economies ready to change the status quo?

From its earliest days (see the 1955 Bandung statement), SSC providers have emphasised that this form of cooperation is motivated by solidarity, voluntary in nature and distinct from ODA, which they view as more strongly reflecting historical responsibilities. SSC has also emphasised knowledge sharing and capacity building rather than resource transfers. This position shows no signs of waning, and has been clearly reaffirmed in recent policy statements.

An international target therefore directly challenges the voluntary nature of SSC, placing value primarily on resource transfers and creating parallels with the ODA concept. The fact that the proposal has emerged without any notable dialogue with SSC providers, and may easily be labelled another Western policy prescription, only heightens these sensitivities.

No one could argue that finding ways to engage emerging economies and UMICs in efforts to mobilise additional development resources and report more openly on SSC would be a valuable outcome from the Addis FfD Summit. However, the fiendishly difficult politics of this agenda need to be much more carefully managed.

A more pragmatic and strategic approach would be to ask SSC providers – who are beginning to work collaboratively through various UN spaces – how they could begin taking steps in this direction. Once any proposals from these actors emerge, they could be the basis for further discussion and part of a genuine process of political negotiation.

Gideon Rabinowitz, Research Officer at ODI, speaks on this topic at ‘Financing the Future: fresh perspectives on global development’ on March 17-18 in Accra, Ghana. View highlights from the conference.