Earlier this month, the International Monetary Fund (IMF) Executive Board approved a proposal for a new general Special Drawing Right (SDR) allocation equivalent to $650 billion – the largest allocation in the IMF’s history. One of the idiosyncrasies of the SDR allocation is that countries that would benefit the most from this issuance receive a much smaller share of the overall allocation. This is why attention is now turning to the reallocation of SDRs. If poorer countries stand to benefit much more from an increase in SDR reserves than richer ones, then from the perspective of maximising global welfare, it makes sense to redistribute those SDRs according to which countries would benefit most from those resources.

Unfortunately, as Euan Ritchie points out in this excellent blog, there are justifiable concerns that the United Kingdom might use potential reallocations of SDRs as the latest front to find further savings in the UK aid budget. If the UK accounted for any lending of its new issuance of SDRs as official development assistance (ODA) and kept rigidly to the 0.5% of gross national income (GNI) ODA target, then grants for other programmes could be cut so as not to overshoot this target. As Ritchie fears, ‘the Treasury is about to let accounting anomalies dictate real-world decisions, and as a result, worthwhile programmes risk being cut for no other reason than to keep ODA constant as a percentage of GNI.’

Accounting for the on-lending of SDRs as official development assistance is currently a British anomaly. It can only be reasonably interpreted as a fiscal gimmick deliberately used by Her Majesty’s Treasury to reduce the burden of meeting the UK’s aid commitment. How so?

The UK already has experience of reallocating SDRs through the IMF’s Poverty Reduction and Growth Trust (PRGT), which provides zero-interest loans to lower-income countries. The UK is not alone in lending to the PRGT: since 2009, 15 of the 20 largest beneficiaries of the 2009 SDR allocation have made loans to the Poverty Reduction and Growth Trust fund either using SDRs or equivalent foreign exchange reserves.

Where the UK does stand apart is it is the only country that currently chooses to report substantial proportions of these loans as official development assistance in its submission to the Organisation for Economic Co-operation and Development’s Development Assistance Committee (OECD DAC). This can be seen in Figure 1, which overlays information on loan commitments made to the PRGT and the amounts of ODA provided to the PRGT that respective national governments reported. 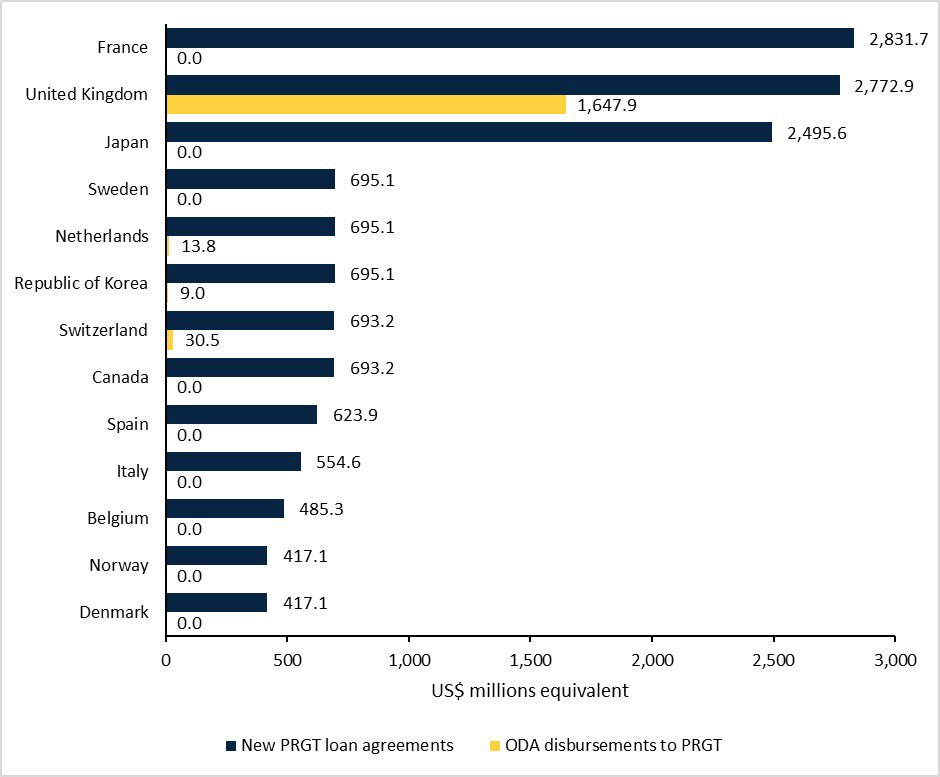 The UK has not always reported loans of SDRs as ODA. For example, in 2009, the UK’s loans to the IMF in the immediate aftermath of the global financial crisis were not reported as official development assistance. The UK only started to record loans to the IMF as ODA from 2015 (Figure 2). Over the next three years, approximately £1.7 billion were drawn down by the IMF and lent through the PRGT. By happenstance, these transactions took place shortly before the OECD changed its approach to recording official development assistance. Prior to 2018, governments reported the face value of loans as positive ODA and their repayment as negative ODA. The change of rules means that the negative repayment flow will now never be recorded. 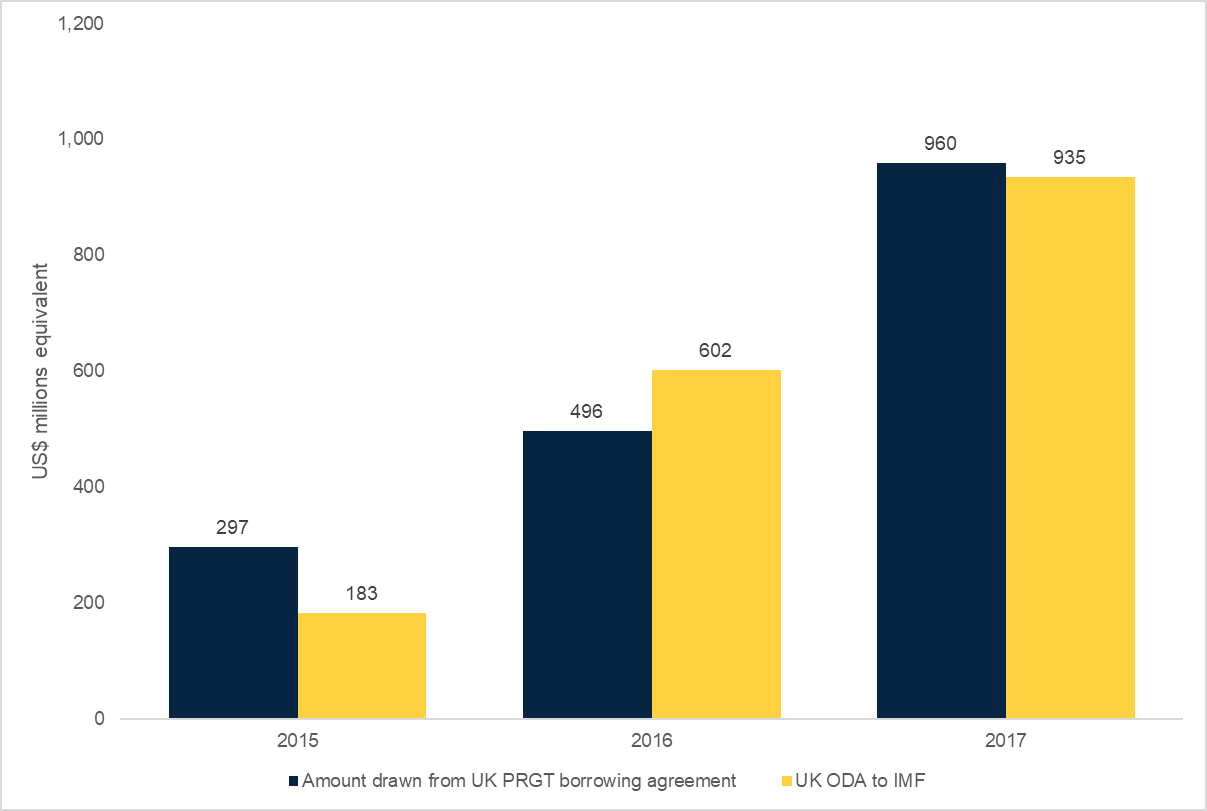 Since 2018, a new method of recording ODA has been adopted that aims to capture the ‘grant equivalent’ of ODA. In the past, loans to the PRGT would have amounted to a net sum of zero once repayments were made. This UK government note [PDF] outlines how under the new method, the UK reports over 30% of the face value of loans made to the PRGT based on the OECD’s concessionality calculator.

This also has implications for aid spending in 2020 and 2021 (and not just potential reallocations of SDRs in the future). In May 2020, the UK changed its lending agreement to raise the total loans available to the PRGT to SDR 4 billion. No information is made available on loans to the PRGT through the UK’s DevTracker portal, however details on IMF borrowings show that 1.4 billion SDRs have already been drawn down (by the end of June). If the UK continues to report SDR loans as ODA, then this would already account for over £400 million of ODA across 2020 and 2021. This is before any reallocation of the new £19 billion SDR issuance is considered.

There is a large literature in public finance on the topic of ‘fiscal gimmickry’. In their paper looking at how governments in Europe manipulated fiscal statistics [PDF], James Alt and co-authors describe fiscal gimmicks as ‘creative or unorthodox accounting treatments of operations to interpret rules in a favourable way, or, occasionally, cheating’.

Accounting for the on-lending of SDRs to the PRGT is an effective fiscal gimmick if the primary objective is to minimise the cost of meeting the government’s stated ODA commitment. Loans to the PRGT currently impose close to zero fiscal burden on the UK. The UK lends its SDRs to the IMF at a fixed interest rate of 0.05%. This is the same amount that the government would currently be earning on its SDR reserves if they stayed in the government’s account. In accounting for 30% of these essentially costless loans as ODA, it can reduce the amounts of spending approved by parliament for the Foreign, Commonwealth and Development Office's aid budget while still ostensibly meeting the ODA target.

This is not an effective approach to guiding development financing decisions if a government were seeking to maximise impact. Interest-free loans from the IMF are a welcome source of liquidity, but they need to be repaid within 10 years. If the UK government’s loans to the PRGT squeezed out, for example, grants to close the funding gaps for global access to vaccines, it would clearly undermine the UK’s overall contribution to the global recovery from the pandemic.

This approach also risks undermining the wider international response. Earlier this month, the G20 called on the IMF ‘to quickly present actionable options for countries to voluntarily channel a share of their allocated SDRs to help vulnerable countries finance more resilient, inclusive and sustainable economic recoveries and health-related expenditures, for example through the creation of a new trust fund’.

If other countries followed the UK’s lead, you could envisage countries substituting more concessional sources of financing with SDR recycling (especially if those countries have signed up to fixed ODA-to-GNI targets, like France). If all other countries reported PRGT loans in the same way as the UK, there would be a further erosion in the reliability of ODA numbers, inflating them by up to $6 billion in 2020 and 2021 alone. As the IMF is mobilising a further $18 billion in PRGT loan resources, this could contribute another $5.4 billion to ODA figures in the next couple of years if other countries adopted the UK approach.

There was once a time when the UK sought to raise the bar on ambition for international financing support. If the UK continues to report its SDRs as ODA, it would be another example of undermining the international crisis response.

Edited on 2 August 2021. Updated on 17 September 2021: on the details of the UK's IMF borrowings, the data shows that 1.4 billion of the UK's 4 billion commitment has been drawn down, not 2.6 billion (which was the remaining holdings).