Prior to the Covid-19 crisis, many Small-Island Developing States (SIDS) were already showing signs of increased debt distress – where debt servicing burdens, current account deficits and elevated levels of public debt viciously feed off each other. The economic fallout from the pandemic is expected to aggravate these hardships, and a wave of sovereign defaults is now looming.

Large-scale borrowing from public and private foreign creditors, particularly after disasters, has given SIDS a diverse set of refinancing options, but this has come with a greater exposure to the vagaries of international financial markets, including sudden changes in exchange and interest rates.

At the Climate and Development Ministerial hosted by the UK Government on Wednesday 31 March, ministers need to focus attention on ‘fiscal space and debt sustainability’ in SIDS, alongside climate finance commitments. In the lead up to COP26, clear plans are needed to resolve the debt crisis in the short term and debt sustainability over the longer-term – so SIDS reduce their vulnerability to climate change and other shocks.

SIDS’ external indebtedness is considerably higher than that of other developing countries. Between 2000 and 2019, the external debt of SIDS rose by 24% (of GDP), while in developing countries debt fell by 6.2% on aggregate. By 2019, external debt accounted for 62% of GDP on average in SIDS (PDF) (Figure 1), compared with 29% for all developing countries and economies in transition. Most of the increase occurred in the aftermath of the 2008 Global Financial Crisis, and accelerate in 2013 – the year of the so-called 'Taper Tantrum', when US bond yields surged after the US Federal Reserve announced a monetary policy normalisation (triggering capital outflows from SIDS for higher returns, a currency depreciation and spike in external debt relative to GDP) , followed by a series of external shocks, all of which put debt positions under further strain. 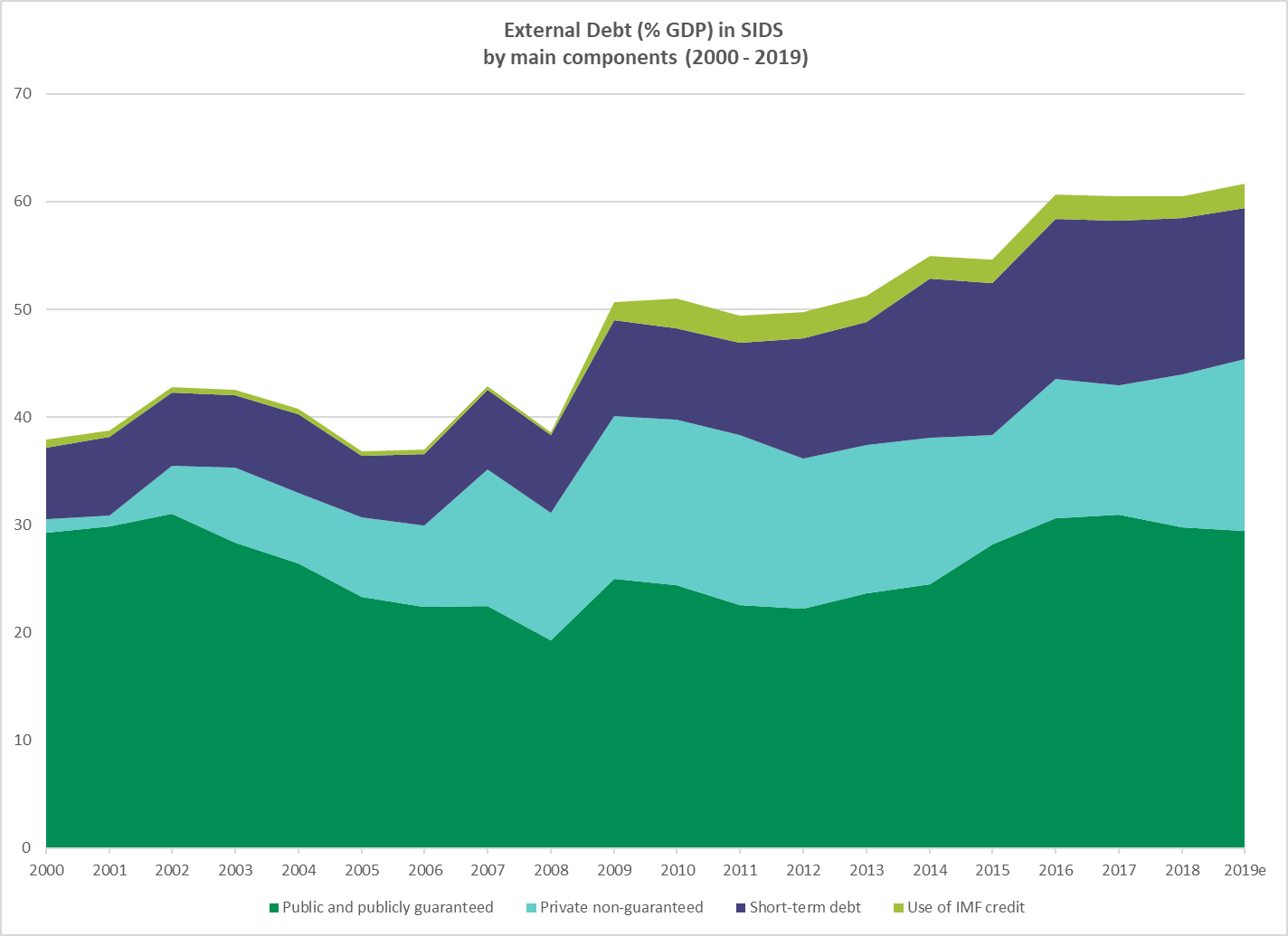 Source: Authors’ calculations based on data from the World Bank, the International Monetary Fund and national sources. Note: 2019 data is estimated.

Why debt distress is occurring in SIDS

SIDS’ economies suffer from low economic diversification, disproportionate impacts from climate extremes and disasters, and are naturally exposed to public debt distress. To understand the severity of debt distress, it is useful to look at the ratio of public debt service to government revenues, in relation to total public debt stocks – both external and domestic – and current account deficits. When these three indicators are simultaneously high, the country is likely to experience debt distress. This means that the country dedicates a huge amount of its public revenues to debt repayments, rather than infrastructure or public services, and as public debt piles up there is very little room to mobilise finance from trade to cope with it.

Figure 2 shows these patterns for SIDS. In Dominica, for example, total public debt is high (78% of GDP); the current account deficit is high (43% of GDP), and the debt service rate is high (10% of government revenues).

Overall, SIDS have higher debt distress than other developing countries, but among SIDS there is a high degree of heterogeneity. Barbados (which restructured its public debt for the first time in 2018 and 2019), Cabo Verde, Jamaica, Antigua and Barbuda, Dominica, Sao Tome and Principe, Saint Vincent and the Grenadines, Maldives, Grenada and Bahamas all have particularly high levels. 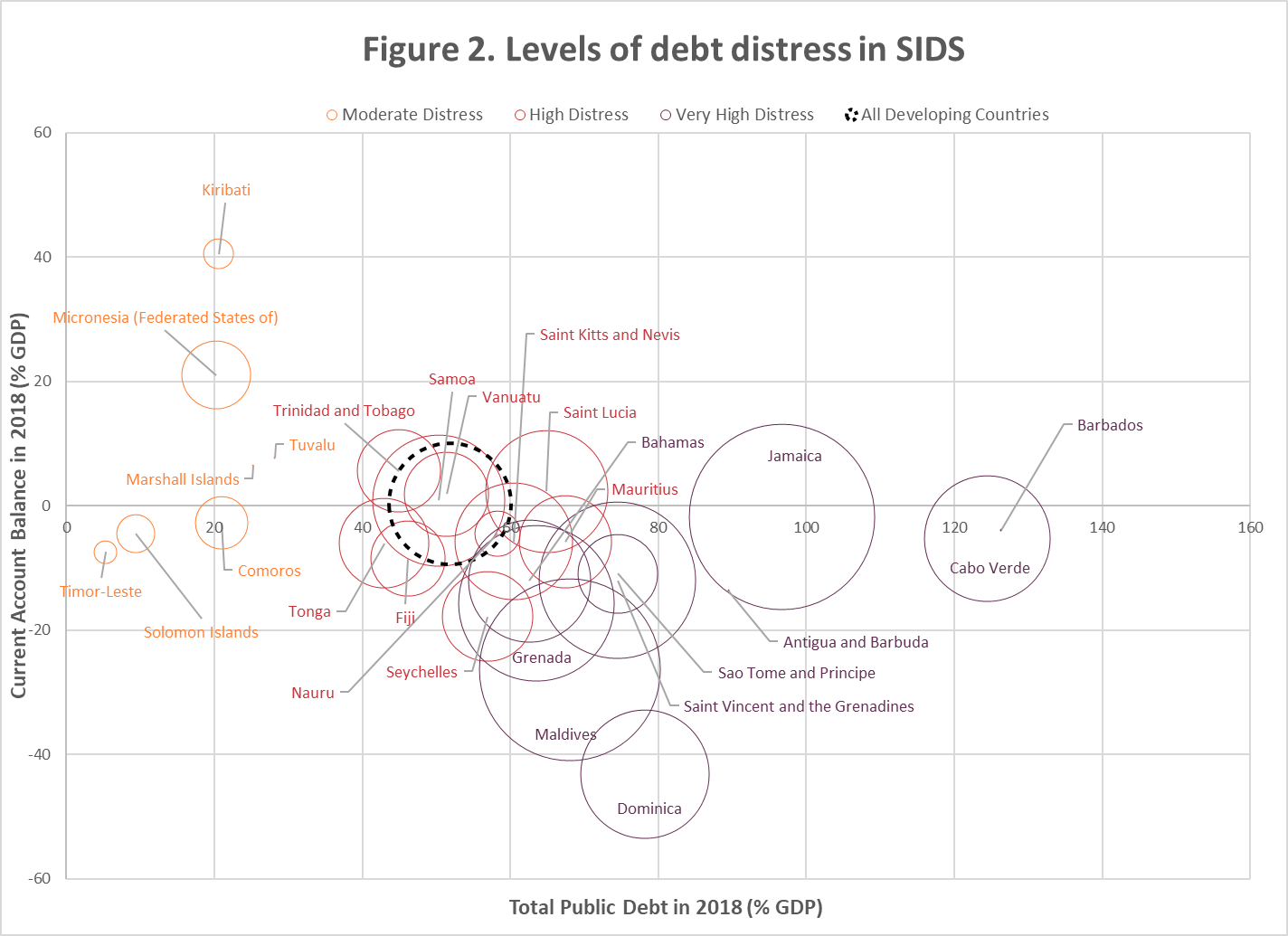 Note: The size of the bubble is the size of the debt service in relation to government revenues (from 0.34% for Timor-Leste to 21.55% for Jamaica). Debt service data is not available for Antigua and Barbuda, Barbados, Marshall Islands and Tuvalu. The classification into the three groups of debt distress was made ex-post, in light of the position of the countries in the three dimensions of the graph.

The Covid-19 crisis will severely aggravate the debt positions of these countries, putting them at great risk of defaulting. All except Antigua and Barbuda, have benefited from IMF’s Covid-19 Financial Assistance and Debt Service Relief since March 2020. Only five so far (Grenada, Cabo Verde, Dominica, Maldives and Sao Tome and Principe), have been eligible for the G20 Covid-19 Debt Suspension Initiative (DSSI).

The Climate and Development Ministerial at the end of March should focus explicitly on the debt crisis in SIDS. It should set the agenda for a bold set of actions to jointly tackle the debt and climate crises in vulnerable islands. This fits with the commitment set by the Paris Agreement for developed countries to provide financial resources to assist developing country in meeting their climate goals. To date, this assistance has focused principally on climate finance. Given the impending debt crisis in some of the world’s most climate vulnerable countries, this assistance should also focus on debt relief and debt sustainability.

Fundamentally, building resilience means tackling both the debt and climate crises simultaneously, and avoiding siloed approaches. This should be at the forefront of discussions in the lead up to COP26.

An Analytical Review: A Decade of Urban Resilience

Our thoughts on COP26 – reflections on the Glasgow Climate Pact

Towards sustained development in Small Island Developing States: why we need to reshape global governance