Many of us are hopeful for a Covid-19 vaccine in the near future to overcome a tumultuous year. But for people living in poverty in lower- and middle-income countries (LMICs), the crisis is far from over. Vaccinations are potentially still years away for these countries, and many donors, such as the UK, have significantly cut their aid budgets. This is a double blow for LMICs. It threatens to reverse hard-fought progress to both lift people out of poverty and improve opportunities for women and girls. It also puts vulnerable groups, such as people with disabilities and migrants, at risk.

As part of the Chronic Poverty Advisory Network’s Poverty Monitoring Initiative (PMI), we talked to those hit hardest by the pandemic and uncovered the shocks and stressors vulnerable populations continue to experience.

New and deepened poverty as a result of Covid-19

Before the Covid-19 outbreak, Terry ('pseudonym') , a woman with a disability living in Nairobi, ate three meals a day with her children and could afford their school fees.

When we spoke to Terry in September, she was only able to afford one meal per day and her children were visiting neighbours to share meals. Lockdown measures abruptly halted her street food business as she was left without a supply of her main ingredient. She was also unable to travel around the city while maintaining social distancing in her wheelchair to sell food. Without an income, her family has been pushed further into poverty.

Despite schools reopening, she wasn’t sure where the money for her children’s education was going to come from. Her medium-term opportunities to recover were also dwindling as she was forced to sell some of her assets to pay for daily subsistence. Since the outbreak, Terry has had to sell her old wheelchair, a cooking stove, water storage containers, all her cooking utensils and some clothes. No longer able to make rent, she has had to move in with her sister.

Many people like Terry who were getting by before the pandemic have had their livelihoods upended. They are likely to face a long and arduous struggle to bounce back, even when the social and economic effects of the crisis begin to ease.

In Kathmandu, elderly people told us how they’ve lost their support networks as social distancing left them unable to interact with the community groups they relied on. In rural Nepal, child marriage rates and gender-based violence have reportedly increased. This will leave long-lasting scars and exacerbate poverty in the long-term, potentially reversing the gains made to protect and uplift women and girls.

Poverty is expected to rise in 2020 for the first time in 20 years. This threatens to reverse the progress many households have made and could subject those who have remained chronically poor to further setbacks and deeper destitution. Those facing multiple forms of social and economic exclusion – women, girls, migrants, people with disabilities, older people, youth, and groups facing ethnic, racial or religious discrimination – are at a heightened risk of poverty. The structural disadvantages that they already face will also likely be exacerbated as the crisis continues. 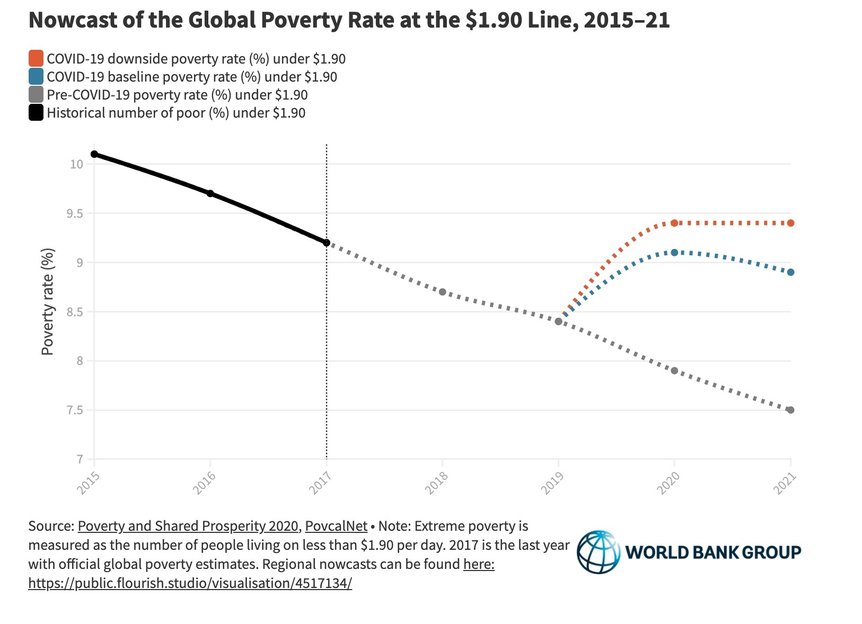 The immediate and medium-term future in many countries is likely to involve further struggle for people like Terry. As high-income countries buy up stocks – despite their commitments under the GAVI Vaccine Alliance – people in lower-income countries could be waiting as long as four years (PDF) to access the vaccine.

Meanwhile, aid budgets are shrinking in the name of domestic interest. These budget cuts leave fewer resources available to tackle the longstanding system challenges people have been facing, let alone the immediate struggles of daily subsistence and protection. In this context, the social and economic impacts of Covid-19 will continue to weigh heavily on LMICs. And without adequate resources to tackle the overlap of poverty with climate change, conflict, crises of governance and uneven relationships with the global economy, these struggles will only be magnified.

If Covid-19 has taught us anything, it is that the world is inextricably interconnected. The disease permeated borders and social and economic classes. The response to the crisis must now do the same.

Find out more about the Chronic Poverty Advisory Network.