Three years ago, the government pledged “to help improve access to UK markets for [the] world’s poorest countries post-Brexit.” To assess that promise, we have analysed how the United Kingdom’s new Global Tariff (UKGT) affects low- and lower-middle income countries (LICs and LMICs). We found that in terms of tariffs, access will not actually improve for up to 95 LICs and LMICs, though neither will their exports be materially damaged. Still, Cameroon, Cote D’Ivoire, Ghana and Kenya are yet to roll over their trade deals and risk facing higher trade tariffs with the UK if no agreement is reached.

In a recent paper, we identify improvements the UK can make immediately by reducing tariffs for some LMICs. However, to make material and lasting improvements in market access will require deeper thinking on issues like Rules of Origin. To fulfill its pledge, we urge the government to set out its plans to tackle these issues fully.

The European Union’s (EU) approach to trade for development is one of the strongest among major economies. Its Everything but Arms (EBA) scheme provides zero tariffs on almost all exports for 41 least developed countries (LDCs, a subset of LICs); and the UK will replicate this. Still, it could be improved: many exporters fail to meet or certify origin requirements and receive no preferences.

The UK has focused on replicating the EU’s trade deals. It has also set out its Most Favoured Nation (MFN) tariff – the UKGT – which applies to those countries without a trade deal and applies average tariffs slightly lower than the EU’s. For LICs and LMICs it plans to match the EU’s approach by offering ‘preferences', which we assume to mean holding tariff levels constant at their lower, ‘preferential’ levels in the so-called Generalized System of Preferences (GSP).

The impact on LICs and LMICs

The (small) reductions in the UKGT stimulate imports from countries that receive either no or few preferences. But at the same time, other exporting countries that receive preferential rates face increased competition due to the lowering of tariffs on their competitors. That is, their so-called ‘preference margins’ are reduced, which in turn hurts LICs and LMICs’ exports. This latter effect is shown in the below chart, which highlights how the reduced UKGT tariff on aluminium will mean a smaller ‘preference margin’ (shown in the white bars) for LICs and LMICs in the preference schemes (GSP, GSP+ and EBA).

Although GSP+ schemes have some positive specific duties, their ad valorem tariffs are 0% on almost all lines that are included in the scheme, so they are combined with EBA on this chart for simplicity. 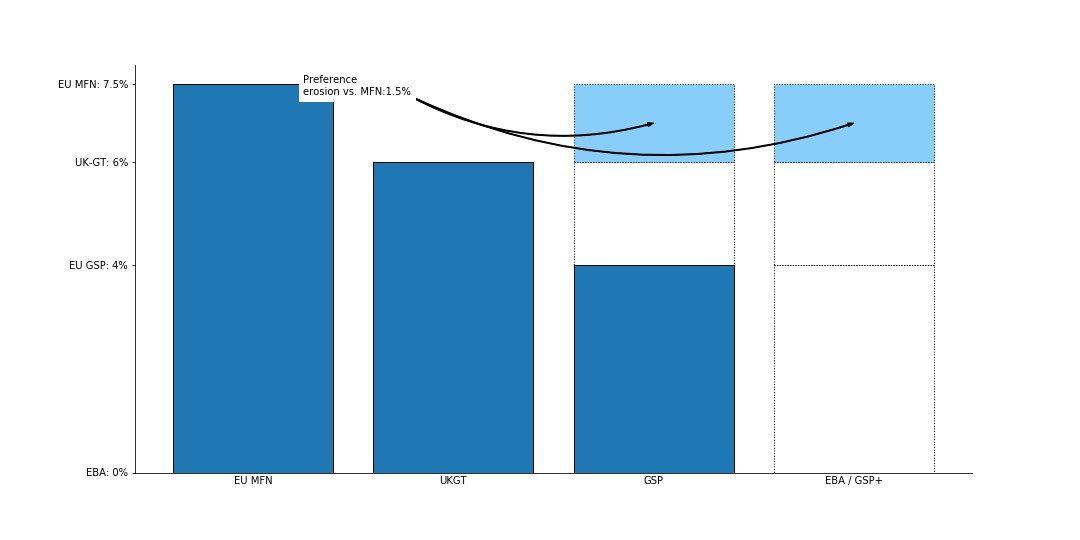 How LICs and LMICs are affected depends on the extent and composition of their exports to the UK. Countries that currently face no tariffs – including the LDCs and those with deep trade agreements with the EU – can only lose from the changes as they encounter more competition. On the other hand, those facing just the lower UKGT can only gain. The group of LICs and LMICs in between (GSP) have to deal with a mix of lower tariffs and increased competition, and also stand to lose.

We find that the countries paying the UKGT – which includes high-income countries (HICs) – will see exports increase by $1.9 billion or 1.5%. A handful of LMICs will benefit slightly – notably India, Indonesia and Viet Nam – while around 82 LICs and LMICs, including the poorest, see a small negative effect (those in EBA, GSP+ or EPA groups collectively lose less than 0.5% of exports). Overall, access will not improve for the vast majority of LICs.

The case of Kenya and Ghana

Several LMICs which have trade agreements with the EU have not yet agreed to roll these over with the UK. Without an agreement, imports from Kenya and Ghana would need to pay some £21 million in extra tariffs. Whilst not particularly significant for their economies overall, this would mean substantial disruption for industries like cut flowers and beans in Kenya, and tuna in Ghana. The UK should start making contingency plans in case an agreement isn’t reached.

A no-deal with the EU would provide additional challenges for certain sectors in Kenya, Ghana and other countries. For example, exports routed via – or co-produced with – the EU could face more substantial tariffs and/or suffer from wider disruption at the border.

The test for UK leadership is whether its plans are incremental – as they currently are – or whether they make material improvements which genuinely accelerate the very limited levels of trade with the poorest parts of the world.

The authors would like to thank their co-authors in the paper – Mattia Di Ubaldo (UKTPO) and Lee Robinson (CGD) – for input to this blog. Any views and errors remain those of the authors.