This is the first in an ODI series of blogs, briefing papers and reports examining whether a new debt or financial crisis is brewing that could threaten the Sustainable Development Goals – and what should be done to prevent it. In this edition, I’ll be focusing on the public (or sovereign) debt situation in low-income countries.

Three worrying trends dominate the public debt picture for low-income developing countries: debt is rising; it has become more expensive; and the proportion of countries that are vulnerable to a damaging debt crisis is high and rising.

According to the IMF, the median public debt of low-income developing countries rose to 47% of GDP in 2017, up from 33% in 2013. Only eight countries in this group did not see an increase during this period. This increased borrowing comes from both home and abroad, with both external and domestic debt on the rise.

Borrowing, if used wisely, can make a major contribution to sustainable economic development. This level of debt may seem relatively small compared to high-income countries, whose public debt rocketed in response to the global financial crisis, and also to low-income country levels during the first decade of this century before debt relief initiatives kicked in. However, the relative size is not the only element that will tell you whether a particular debt level is worrying.

The rise in debt levels has been accompanied by a shift in the cost of the debt, which has become much more expensive. Taken together, these trends equal a big warning sign. More expensive debt means that governments have to spend more of their revenues repaying it. This means less for other priorities like health, education, or infrastructure. It also leads to an increased probability that debt will increase, as borrowing may be needed to plug holes in expenditure caused by the diversion of revenues to repay debt.

One analysis, using IMF and World Bank data, estimates that the amount governments are paying to service debts has almost doubled in recent years, taking up more than 12% of government revenue in 2018, compared to under 7% in 2010. Given that low-income countries struggle to raise tax revenue – tax as a share of GDP is significantly lower than for other categories of country – this large share of revenue taken up by debt servicing is a big problem.

Debt has become more expensive in low-income countries because of changes in who the money is borrowed from, as the graph shows. 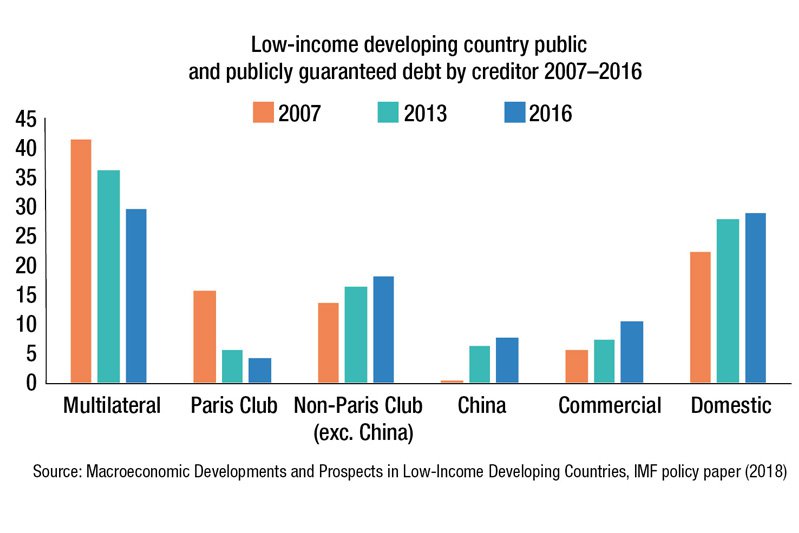 There are three main shifts to note. First, more is being borrowed from private commercial creditors, who charge significantly higher interest than public creditors. Second, there has been a shift within public creditors away from ‘traditional’ creditors – including multilaterals like the World Bank or bilaterals that are also members of the Paris Club, such as European countries, Japan and the USA.

This shift is often assumed to be due to the rise of Chinese lending, which explains part of the trend. However there has also been an increase in lending from other non-Paris Club creditors, and a significant decrease in shares from the Paris Club itself – as well as from multilaterals. Third, there has been a shift towards more borrowing from sources within the low-income countries themselves. This domestic debt is now a larger share of the total, though the domestic debt share is small compared to middle- or high-income countries.

Trend 3: Many countries are vulnerable to debt crisis

According to the IMF (PDF), in 2019 almost half of all low-income countries – most of which are in Sub-Saharan Africa – are either in ‘debt distress’, or at a ‘high risk’ of becoming so. This is more than double the proportion it found in 2013. This extremely worrying finding comes from the debt sustainability analyses that the IMF conducts with the World Bank for the countries which are eligible to borrow at lower interest rates from the two institutions.

Low-income countries have attempted to protect themselves from such shocks by building reserves – in effect, lending money to rich countries in order to have a stock of hard currency assets to use in the event of a crisis. However, low-income country reserves have been declining since 2010 despite recent efforts to rebuild them, and so their self-insurance policies are also weakening.

Things may be worse than they seem

Sadly, even this worrying assessment may well be optimistic for two main reasons. First, low-income countries are highly vulnerable to shocks. Given that a high proportion of their debt is external and normally borrowed in a foreign currency, drops in the value of their national currencies – a relatively common occurrence – can significantly worsen their debt situation.

Many low-income countries are highly dependent on exports of primary commodities. However, the price of these is volatile, with a major slump in 2015 being a contributing factor to the deteriorating situation for many countries. Conflict, natural disasters – increasingly driven by climate change – or epidemics can also have dramatic impacts on debt levels, which rose by an average of 22% of GDP in Liberia and Sierra Leone following the Ebola Epidemic, for example.

Second, the figures collected by international financial institutions are likely to be underestimated, as transparency of reporting on debt is poor from both debtors and creditors. This is partly caused by the fact that there may be significant data gaps in many countries, with an IMF study noting that its figures often only reflect central government debt.

There is also a major problem of ‘hidden debt’, in particular public guarantees and other liabilities, such as those associated with public private partnerships (PPPs) that would add to the debt pile of countries in certain circumstances. In some countries, for example, a PPP related shock could have a fiscal impact of more than 10% of GDP.

It is also likely that official figures underestimate the scale of borrowing from some creditors, including China, which does not report on its lending to many multilateral bodies, and the private sector. For example, the IMF estimates that low-income countries owed debts equivalent to 4% of GDP to China in 2016, while a more recent academic analysis estimates that the 2017 figure was closer to 11% of GDP.

A rising level of more expensive debt that is taking up an increasing share of public resources to repay appears to be pointing towards a major, potentially damaging debt crisis across low-income countries. That is, unless something can be done to prevent it. The next blog in this series will examine the reasons behind these three trends, and what could be done to stop such a widespread crisis occurring.

Old wine in new bottles? China, the G7 and the new infrastructure geopolitics

Ethiopia and investment provisions in the AfCFTA: issues and challenges

ODI in conversation with Fatou Bensouda