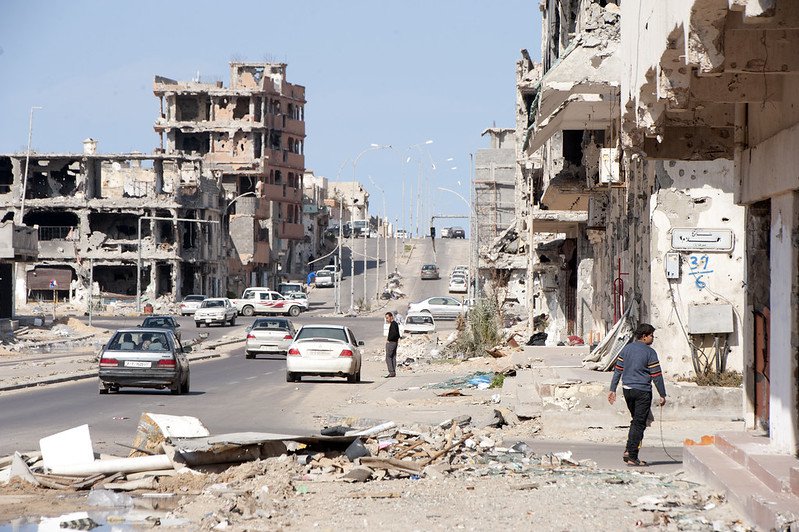 Libya’s volatile conflict has limited the movement of people into the country and made it difficult for coronavirus to spread. However, while there have been relatively few confirmed cases so far, public health officials in the country are right to fear that the virus could further devastate the war-torn country.

Years of authoritarianism, a weak healthcare system and conflict will make the outbreak much worse than in other countries, as the warring parties prioritise political gain over the protection of civilian lives from the pandemic.

As a conflict zone, fighting the pandemic in Libya poses a particular set of challenges.

1. Coronavirus as a political weapon

Fear of the virus is likely to be weaponised by armed groups with a risk that the fight to gain political and territorial power will take precedence over fighting the pandemic.

We can already see the politics of the pandemic playing out in other countries in conflict, as warring parties use the virus to gain political advantage and territorial control. Libya will be no exception. In Yemen, under the pretext of protecting the population from the spread of the pandemic, the Houthis have further restricted the movement of people between areas under their control and areas in government hands. This has also meant additional restrictions on humanitarian access to millions of Yemenis.

In Libya, attacks on Tripoli by forces led by General Khalifa Haftar have continued despite a commitment to a humanitarian pause in fighting to allow the authorities to focus on reducing the spread of the virus. Reports of  human rights violations have also been circulating on social media. A Libyan medic was recently arrested in Benghazi after he appeared on a Haftar-supporting TV channel and expressed his concerns about lack of preparation for Covid-19 in the eastern region of Libya.

There is also the worry that armed groups will be keen to make quick political wins irrespective of violations to international human rights law while the world is preoccupied with the fight against the virus. They continue to commit human rights crimes with impunity. Over the past two days, attacks by Hafter-aligned militias have resulted in deliberate water and electricity cuts all over Tripoli.

2. Coronavirus is fuelling hatred towards migrants and refugees

Migrants and refugees remain a vulnerable group in Libya, both within and outside of detention centres. A number of centres closed in 2019 in Misrata, Tajoura and al-Khums, but violations continue in ones that are still open.

In al-Khums in north-west Libya, a migrant from Eritrea with bronchitis was refused shelter by the community and turned out onto the street. Volunteers passed him to a local civil society organisation for assistance. According to Mohamed Alhmouzi, the director of the organisation, incidents such as this are becoming more common as people become anxious about the virus and fear that African migrants entering the country, especially through Fezzan, are bringing it with them.

3. The impact on healthcare

Years of fighting have devastated infrastructure across the country, and access to healthcare will be difficult, especially if borders with Tunisia and Egypt, where richer Libyans go for healthcare, are closed. Flights to both countries have already been suspended.

According to the World Health Organization (WHO), health remains a major concern in Libya, especially for migrants and refugees. Many people live without access to clean drinking water or proper sewage systems, especially in the south, so following advice regarding regular hand washing will be difficult in practice.

Community activism and the need for global solidarity

Local efforts to tackle Covid-19 across the country have been impressive. One businessman in Misrata recently donated 100 beds to hospitals to prepare for the outbreak. In the south, Alhmouzi’s civil society organisation has launched a campaign to disinfect public spaces, and has called on volunteers to help.

Such acts of solidarity are similar to those in the days following the downfall of Gaddafi. There is hope that the pandemic can be defeated before it claims many lives, but there is also a recognition that available resources are not enough, and that the months to come will be difficult.

Dr Ahmed Sewehli, a British-Libyan psychiatrist living in Manchester, admitted to me his deep concerns about existing capacity to deal with an outbreak. Recent reports on social media about lack of running water at the infectious diseases department of Tripoli Central Hospital support these concerns.

Global solidarity is needed to help local initiatives rise to the challenge. This solidarity should be in the form of increased pressure on warring parties to adhere to the humanitarian pause and the cessation of hostilities. It should also be in the form of provision of resources to healthcare facilities in Libya to ensure that they are prepared for the outbreak.

1915 is known in Libya as ‘the year of steel’. This refers to the steel-covered mass graves dug by Libya’s Italian colonial government to bury those that died from famine. Despite the many advances since then – without effective leadership, greater concern for the civilian population, and more international support – the risks to Libyan lives may be as great.