Communities across the world have suffered devastating extreme weather in the past year, from wildfires in Australia, the western United States, Turkey and Greece to deadly floods in Germany and central Europe and China and super-cylones in India and Bangladesh and the Philippines.

For the hundreds of millions of people recently affected by these extremes, the message that human-caused climate change is to blame may come as no surprise. But for the Intergovernmental Panel on Climate Change (IPCC) to confirm this message, in stronger and more definitive language than ever before, carries a special weight.

The IPCC launched today Climate Change 2021: The Physical Science Basis, which makes up part of its Sixth Assessment Report. The report draws on major advances in climate science from more than 14,000 scientific publications since the last assessment was published in 2013-14, to establish far more definitively how greenhouse gas (GHG) emissions and land use change from human activities contribute to extreme weather events and changes in seasons.

The previous Fifth Assessment Report (2013-14), found it ‘extremely likely’ that GHG emissions from human activity were contributing to global warming; but today’s report says ‘it is unequivocal that human influence has warmed the atmosphere, ocean and land’.

The report examines changes in temperature and water cycles, past, present and future. It tells how the planet’s oceans and cold places are being hit particularly hard, with glaciers and ice sheets melting. Sea levels have risen by around 20 centimetres since 1901, with the rate of sea level rise accelerating since 1971 and especially since 2006.

There is now robust scientific evidence to show that heat extremes, heavy precipitation and droughts are increasing in frequency across every region of the world - as shown in the IPCC’s online interactive atlas. Average global surface temperatures were 1.09°C higher in 2011-20 than in pre-industrial times (1850-1900).

What is more, with each additional increment in global warming, extreme weather events become more extreme. The IPCC finds, for example, “every additional 0.5°C of global warming causes clearly discernible increases in the intensity and frequency of hot extremes, including heatwaves (very likely), and heavy precipitation (high confidence), as well as agricultural and ecological droughts in some regions (high confidence).”

The new report describes five future GHG emission scenarios, associated with a range of warming scenarios from 1.5°C to 4.4°C (above pre-industrial levels) this century. Even the very lowest GHG emission scenario considered by the IPCC would more likely than not see average global temperatures rise to 1.6°C by mid-century (called ‘overshoot’) before settling toward 1.4°C by the end of the century.

The IPCC’s report also alerts us to the possibility of low-likelihood events that could be set in motion. These include the potential for massive sea level rise of greater than 1.5m by 2100 (see diagram) under a high emissions scenario. The report also acknowledges that even if warming is limited to 1.5°C, “global mean sea level will rise by 2 to 3 m” over “centuries to millennia. 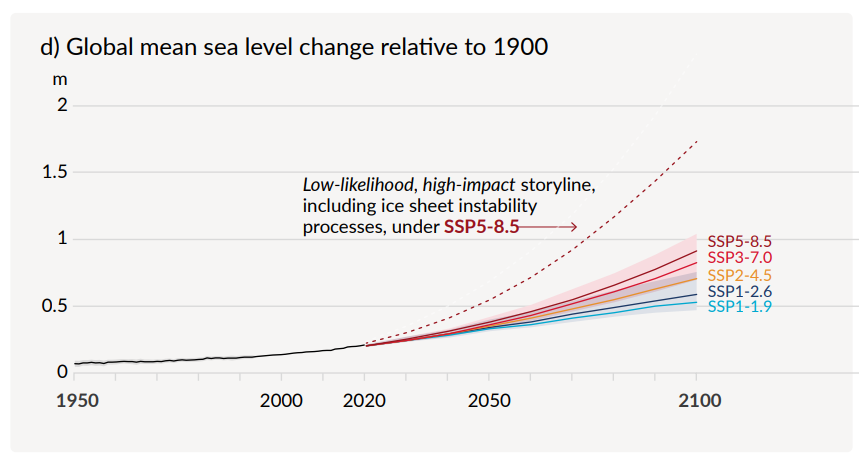 Image credit:Figure: there is a direct correspondence between high levels of GHG emissions from human activity this century (SSP5-8.5) and the extent of sea level rise this century, with there being a possibility – although of low probability – of hugely destructive changes under the highest emissions scenario. Source: IPCC’s Climate Change 2021: The Physical Science Basis report

Hundreds of millions of people live on land less than 2 metres above sea level, the majority in the tropics. And so, this alarming finding is likely to shake political leaders - especially those from atoll nations and other Small Island Developing States (SIDS), who have adopted the rallying cry ‘1.5 to stay alive’. The high sea levels and more destructive waves, as well as high temperatures and droughts associated with more than 1.5°C of global warming, are considered a critical risk to their viability as nations.

We cannot take for granted the ability of the oceans and forests, wetlands and grasslands to keep absorbing our pollution. Oceans are acidifying and some forests, like the Amazon rainforest, have been so degraded by human action that they can no longer absorb large amounts of carbon dioxide. The science in today’s report indicates that the ability of natural land and ocean carbon sinks to absorb emissions will decrease, the more emissions climb.

The report makes clear that we still have a choice: to cut carbon dioxide emissions to net zero by 2050, in order to limit global warming to 1.5°C within this century. Or, we continue to choose higher emissions and face a climate above 2°C in which our jobs, homes and infrastructure, food and water supply are dangerously insecure.

The stark scientific evidence outlined in today’s report ought to send political reverberations through the forthcoming global climate change negotiations, COP26, in Glasgow. The Summary for Policy Makers has been approved by governments around the world. Now the talks are in urgent need of invigoration after their pandemic-related postponement from 2020. The IPCC’s report could provide the scientific impetus that is needed.

SIDS and Least Developed Countries (LDCs) suffering the worst consequences of climate change, and with the least role causing it, will have good reason to use today’s report to reinforce their calls for a halt to fossil fuel investments.

The G20 countries are responsible for the vast majority (78%) of today’s greenhouse gas emissions; although several G20 members are still to submit their updated climate action plans, known as the NDCs, to the United Nations. Meanwhile, ODI’s research shows that G7 countries are still pumping more money into fossil fuels than into clean energy.

SIDS and LDCs will also have reason to redouble their calls for a surge in donor funding for low-carbon development at home and abroad, finance for climate adaptation, and compensation for climate-related loss and damage.

Many climate-compatible development choices are cost-competitive with fossil fuels or even cheaper, in today’s markets (such as renewable energy technologies). However, switching out fossil-fuel dependent infrastructure for low-carbon alternatives and paying the bill for climate-resilient housing and infrastructure can add incremental cost to policies and projects. Many low- and middle-income countries are struggling to meet these costs, as the Covid-19 pandemic restricts their fiscal space. In this context, financing for development that is compatible with the Paris Agreement’s 1.5°C global temperature goal has never been a more pressing concern.

Rich nations have not yet met their commitment to disburse $100 billion per year to low- and middle-income countries to finance climate-smart development. The finance must urgently be released. A new, more ambitious global goal for climate finance should be set and met, to catalyse the needed changes to avert a deeper planetary emergency.

Prime Minister Gaston Browne of Antigua and Barbuda, Chair of the Alliance of Small Island States, has said “we need our developmental partners to fulfil their commitments and formulate a new global financial goal commensurate with the new global realities.”

The IPCC is a scientific body, not a political one. But its conclusions today are deeply politically relevant. They lead directly to conversations about money, policy, and society-wide commitment to change.