Policing women’s bodies and people’s reproductive potential is back on the global agenda. The impact of any legal decisions will extend far beyond any one administration, state border or political moment.

The overturning of Roe vs. Wade in June 2022 in the United States is just one blatant example of how nation states can use laws and institutions to claw back patriarchal power. This is extremely alarming.

Many people believe rights are ‘enshrined’ in law or in a constitution, giving the sense of permanence and security – but as we know, laws and constitutions change and are interpreted by the humans that design them. This is what we have witnessed in the US: Justice Alito writes in his Supreme Court opinion that the decision to overturn Roe vs. Wade can be legally defended because it is rooted in the ‘history and tradition’ of the country.

However, thinking more deeply about the ‘history and tradition’ of the United States reveals invisible biases in this position. Although not obvious at first, the fall of Roe vs. Wade shows a commitment to primarily protect people’s rights that align with the patriarchal, heteronormative and white view of society that originally created the constitution.

This intersection between institutions, policy and misogyny is what poses a serious threat to reproductive justice everywhere. So, we must pay attention to the institutional cultures and context that made the overturning of Roe v. Wade possible (and probable). Otherwise, we fail to understand how human rights considered secured, can be taken away – or simply disregarded.

"This intersection between institutions, policy and misogyny is what poses a serious threat to reproductive justice everywhere."

From the US, to Kenya to the UK, most institutions have historically been designed by men and for men, which means they are not neutral spaces. Their processes, rules, and physical set-up carry within them the ideas and values of those who created them – meaning invisible social norms of racism, classism and sexism tend to seep into how they function. This shows up in the nature and scope of decisions made there.

In practice, this may take the form of disproportionate cuts to women’s social services, failure to prosecute rape crimes or adequately resource maternal healthcare or accommodate breastfeeding in public spaces. Government policymaking within Departments of Health, Justice and Education, and the police, ends up reproducing the same biases, prejudices and patriarchal gender norms that shape society. We understand this as: institutional misogyny. 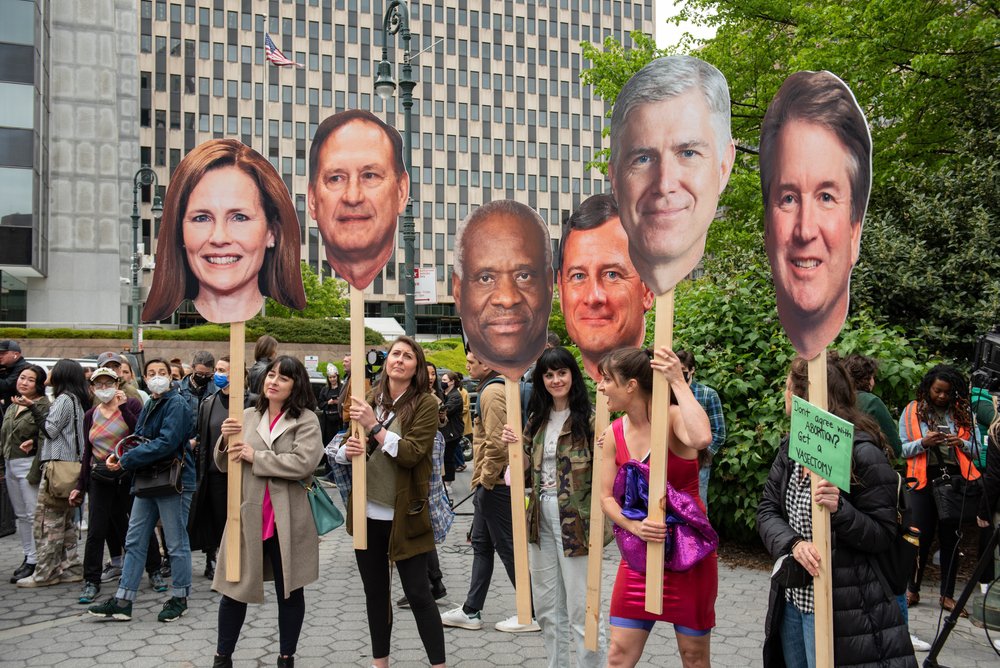 Image credit:Demonstrators hold signs with the faces of SCOTUS justices at an abortion rights rally at Foley Square, New York on May 3, 2022. Credit: Ameer Mussard-Afcari / Shutterstock.com

Institutional misogyny is a global story

The case of Mildred Mapingure in Zimbabwe reflects the experience of so many women who have their reproductive rights transgressed around the world by misogynistic institutions. In 2006, after being attacked and raped by robbers at her home, Mildred was repeatedly denied access to medication to prevent pregnancy or sexually transmitted infections. Pushed from pillar to post over three days, by both police and medical practitioners, Mildred missed the time-window to be prescribed emergency contraception – due to institutional rules demanding the presence of a police officer and a police report before administering the medication. About a month later, Mildred was confirmed pregnant, and only after eight years did Zimbabwe’s Supreme Court find that the police and medical professionals failed in their duty to assist Mildred in accessing timely services to prevent pregnancy.

Why did this happen? And why do institutions uphold rules that do not meet the needs of those they care for? Many women seeking emergency obstetric treatment in health facilities are met with hostility and judgment from care providers, especially if they live at the intersection of multiple oppressions or don’t conform to gender norms (such as strict ideas about female sexuality or respectability).

People are denied access to sexual violence support services because of being LGBTQIA+, or abortion medication because of stigma, fuelled by patriarchal social attitudes or other prejudices around race, age, disability, and socio-economic status. This silently shapes the way institutions respond to the needs of the populations they serve – contributing to poor health outcomes.

"At the core of these unequal power dynamics are the patriarchal norms and gender stereotypes that determine our places in society."

At the core of these unequal power dynamics are the patriarchal norms and gender stereotypes that determine our places in society. Controlling somebody’s womb is the ultimate control over their body, reaching inside their physicality. Where state policy instruments infringe a citizen’s sexual and reproductive rights, they are often reflecting norms about women’s place being in the home under the care of men, and ideas that they are born to nurture children – fulfilling their ‘Motherhood’ role to society.

In countries like El Salvador where there is a strict abortion ban, arriving at a public hospital seeking treatment for a miscarriage is a risky business. Instead of receiving medical care, women can be cuffed to the bed and accused of murder. In Senegal, women seeking reproductive health services can be subjected to bodily surveillance through vaginal examinations and ultrasounds, violating their bodily integrity to prioritise investigations for signs of illegal abortion, such as a perforated uterus. In the UK, women who seek abortion without the consent of two medical doctors can be punitively jailed.

Reproductive justice is at stake in the wake of Roe vs. Wade decision

At this critical moment when reproductive justice is threatened across the world, we must talk about the ways in which patriarchal power is reproduced. Sustained by stubborn gender-biased attitudes, legislation can normalise and embed existing power imbalances in society. Laws or judicial decisions are not neutral but are passed down by individuals with their own worldviews. If we do not pay attention to the human processes that inform them, we hide how elites can mobilise institutions to implement laws and policies that extend their own authority – without wider public or popular consent. This plays a critical role in restricting women’s and LGBTQIA+ peoples’ bodily autonomy.

As we have seen, women as well as men can reinforce patriarchal norms – often in allegiance with their class, racial or ethnic privilege. Amy Conan Barrett for example, another US Supreme Court Justice, supported Alito’s opinion. We can only imagine how this will play out in the UK, with new Prime Minister Liz Truss and Health Secretary Thérèse Coffey both signalling anti-abortion views.

Overturning Roe vs. Wade has sent a message to other countries that progress on reproductive justice can be re-contested. This is a threat to everybody, everywhere. Only through exposing and dismantling the structures of institutional misogyny can real gender and reproductive justice take root. Political mobilisation will play a critical role in advancing freedom in this space – we must collectively act, knowing that the courts are not the only place where this fight will be won. 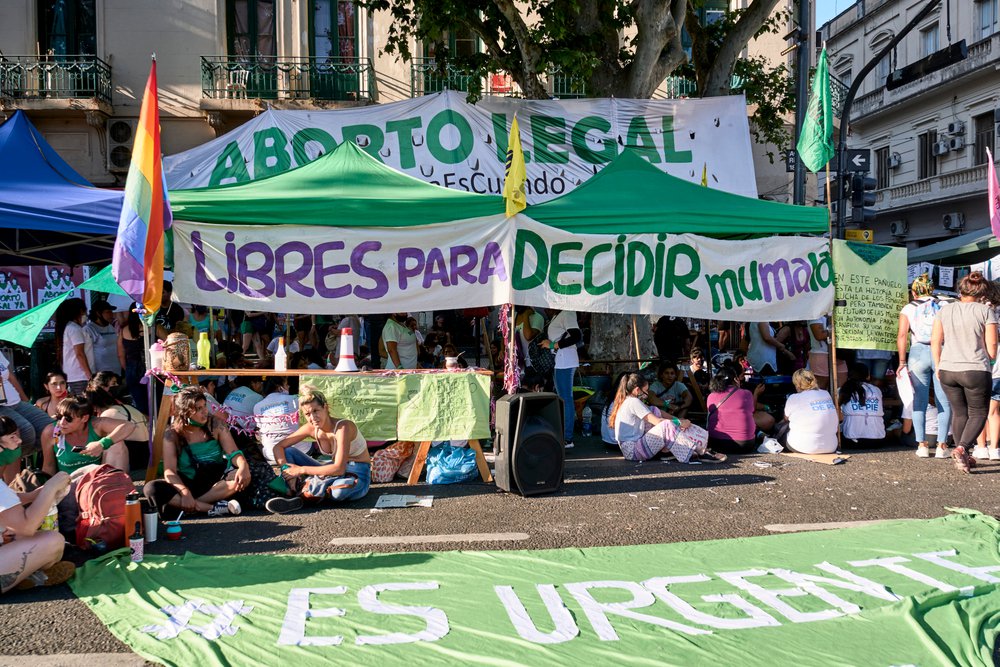 Roe vs. Wade Insights series
For the next three months, ODI is inviting a guest author to offer their expert analysis on a unique angle of the Roe vs Wade debate, and delve deeper into its impact on reproductive justice around the world.

Think Change episode 5: how can global feminists help fight back on Roe?