The combined crises of Covid-19, Russia’s invasion of Ukraine and high inflation have downgraded global economic forecasts and increased poverty and inequality. Many governments are considering measures to mitigate the effects of rising prices, but with more constrained budgets.

Fiscal policy can play an important role in reducing poverty and inequality, as our recent review of evidence shows, reducing the latter by over 25% in some higher- and middle-income countries. Governments’ policy responses to the Covid-19 pandemic further demonstrates its potential.

So, where does that leave fiscal policy options for low-income countries, where tax bases and social safety nets (SSNs) are narrower and budgets even tighter? We argue that there is still room to make fiscal policy work better, particularly by targeted social assistance, supported by tax reforms. Here we outline six ideas to help shield the vulnerable from rising prices in the short term, while following a longer-term path towards more sustainable and inclusive economies.

1. Transfers to the most vulnerable provide more bang-for-buck than tax cuts or price subsidies

Tax cuts or price subsidies can appear to be a quick fix to limit the pass-through of global prices to consumers. Yet, they can be a blunt and expensive means of protecting the poorest. While broad income tax cuts may help some taxpayers on low incomes, they also benefit the better-off. Similarly, corporate income tax cuts benefit profit-making businesses, not those struggling to break even. Consumption tax giveaways and price subsidies tend to be captured by the richest households since they consume more. Foregoing tax revenue to benefit the better-off also does little to stimulate the economy since this group tends to have a higher propensity to save, rather than spend, compared to those on lower incomes.

Cash transfers to the most vulnerable will therefore provide a more meaningful impact on the economy, poverty and inequality. If SSNs are extremely weak or non-existent, providing consumption tax cuts or price subsidies might be better than nothing, but may need to be targeted and temporary to limit the cost of domestic revenues foregone.

2. Transfers may be more affordable if simpler and targeted

Delivery of cash transfers is typically either on a targeted (but complicated) or universal (simpler) basis. Universal ‘social floors’ (basic safety nets) are unlikely to be affordable for lower-income countries for some time. Targeted transfers through means-testing tend to come with higher administrative costs and risk unintended consequences by affecting incentives to work. This has fuelled debates on the trade-offs between targeted transfers and universal benefits.

There are ways transfers can be designed to be both simpler and more targeted. For example, it is possible to use categorical or geographical transfers based on characteristics such as age, disability, household composition or geographic location.

As economies expand, richer countries collect more domestic revenue and spend more on social sectors (see Figure 1). While levels of social spending are related to overall budget constraints, policy choices can still affect inequality outcomes in lower-income countries. For example, it may be possible to identify spending that could be reallocated, or improve the efficiency of public spending, to direct funds towards social priorities that enhance growth and are sustainable. 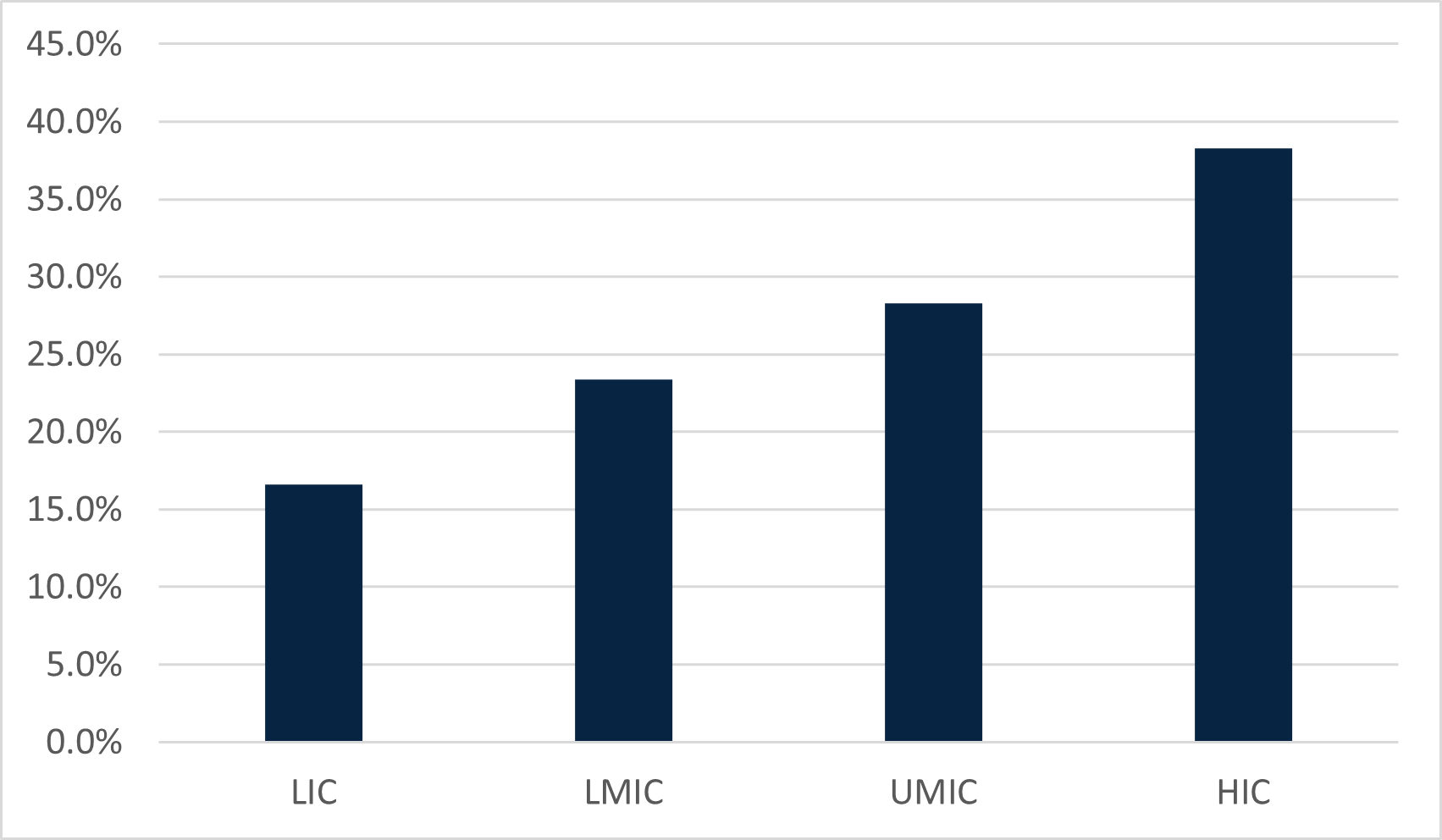 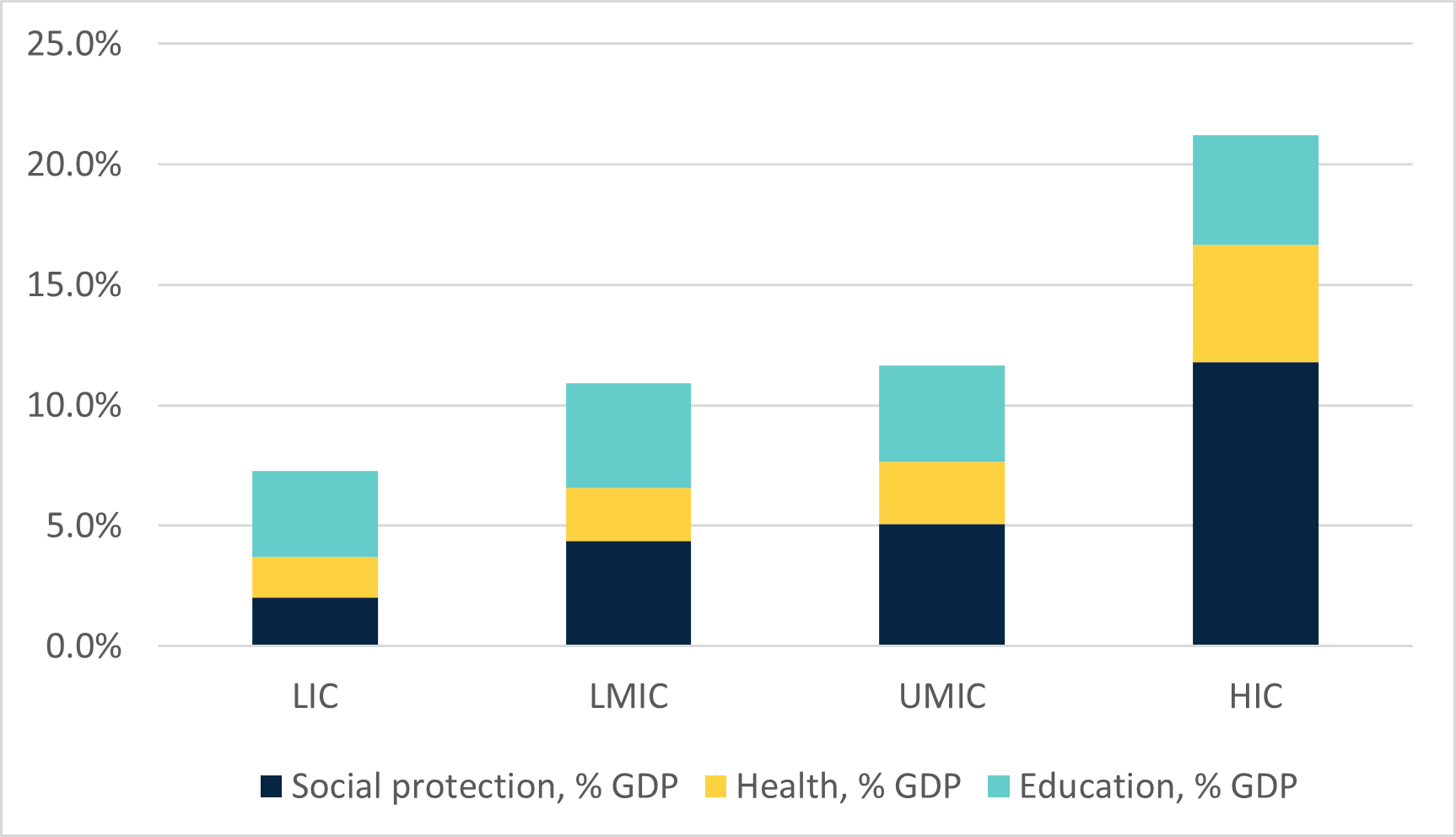 4. More progressive direct taxes can enhance both revenue and growth

Public support for ensuring the better-off pay their fair share of taxation appears to be growing (see evidence from the UK and US), after decades of decline. There is also evidence that tackling income inequality can be good for growth, and that direct taxes and transfers have a bigger impact on income inequality than indirect taxes and subsidies.

Most people prefer progressive taxes, but what does this mean in practice? First, top marginal rates have been falling in recent years (Figure 2), and could be increased to rates of about 60% without harming growth. Second, (infrequent) income tax reforms in Africa have dragged many of the poorest into the tax net, suggesting marginal rate bands need to be adjusted in line with inflation. Third, ensuring different sources of income are taxed equally, including business income tax, helps prevent unfair avoidance or advantage by top income earners who are more likely to receive income from non-employment sources. 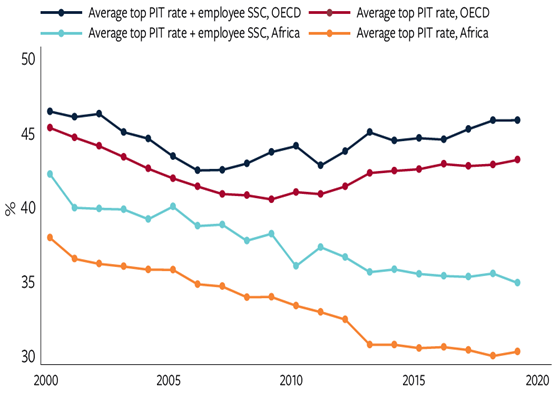 Other forms of progressive taxation might include wealth and windfall taxes. Wealth taxes come in different forms and revenue performance has been mixed, but not always insignificant: Argentina, for example, reported receipts of $2.4 billion in the first four months of operation, and Switzerland’s net wealth taxes yielded 5.12% of revenues in 2020. Windfall taxes have also been introduced (e.g. in the UK and EU) following unexpectedly large profits by some sectors and individuals during the pandemic.

In lower-income countries with large informal sectors, the use of VAT exemptions and price subsidies to support the poorest may be less effective than in other contexts. This is because the poorest households tend to buy from informal (non-registered) vendors or vendors that do not pass through the full reduction in VAT to prices, and because they may not have access to network energy supply or water and sanitation subject to price subsidies.

VAT exemptions are inefficient compared to maintaining a broad-based VAT combined with social transfers, even in lower-income countries. Indeed, there may be ways to design such reforms to be revenue-neutral, using revenue from removing exemptions for targeted transfers.

6. Health and environmental taxes can raise revenue and have wider benefits

Health taxes on tobacco, alcohol, gambling or sugar-sweetened drinks are typically used to discourage consumption by pricing-in the social costs. For some addictive goods like tobacco, some people may cut down on smoking after the tax rises, but not by as much as the increase in price, leading to a net gain in tax collections. The World Health Organization (WHO) claims that tobacco costs households and governments over $1.4 trillion in healthcare and lost productivity, while increasing excise rates by $1 per pack could raise an additional $178–219 billion globally.

There is also a reported gap between fossil fuel prices and the true social cost of environmental damage. Where public support can be built, there could be a case to levy more environmental taxes. These are more progressive in lower-income countries, where better-off households and businesses consume relatively more fuel. Evidence suggests a share of additional revenue could be used to compensate lower-income consumers for higher taxes, while also addressing environmental externalities.

Conclusion: putting theory into practice is hard and needs attention

Introducing new measures at this difficult juncture calls for strong political leadership and clear communication and engagement with citizens to build support for tough choices. Raising taxes or cutting spending can be highly sensitive and can spark protests (such as those in Colombia in 2021). Impoverishing effects from removing VAT exemptions and price subsidies or increasing environmental or health taxes can be mitigated by targeted cash transfers funded by additional revenue.

In times of uncertainty, ‘no regret’ policies, which adapt to changing circumstances while aligning to longer-term policy objectives, make sense. Evidence-based, publicly endorsed medium-term revenue strategies (as in, for example, Rwanda) may provide a supportive framework for evidence-based planning and help avoid knee-jerk policy-making (e.g. the UK’s recent mini-budget).

Looking back, looking forward: where next for US inflation?

With inflation rising, will Africa face another crisis in public sector pay?