​The 2015 India-Africa summit, held last week in New Delhi, aims to cement a partnership between two dynamic regions that together account for a third of the world population.

Crucially, they have the potential to do much more business with one another. But while greater integration between India and the African continent presents mutually beneficial opportunities, it won’t be without challenges.

Africa enjoys strong economic relationships with traditional partners like the EU. China is quickly becoming one of the region’s main investors as well – alongside the US, it is currently Africa’s second largest trade partner.

Meanwhile, India’s trade role in Africa has grown at a steady – albeit lesser – pace, as this graph shows: 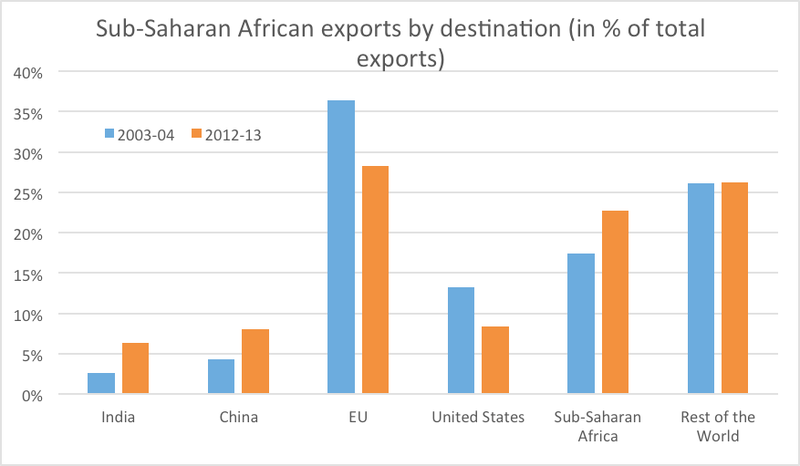 Source: own calculations based on UN-Comtrade database

The Indian government’s financial resources are not as large as China’s. It is Indian private investors who tend to be leading and financing the country’s activities in Africa.

However, the Indian government is supporting firms and providing the institutional and diplomatic framework of the relationship (two previous summits were held in 2008 and 2011).

What does India gain?

Africa is a dynamic trade partner, geographically close to India. Given India’s cumbersome logistic and bureaucratic costs domestically, it can be cheaper for a firm in Mumbai to ship a product to Kenya than to transport it to Kolkata.

African and Indian consumers have similar levels of income and, consequently, compatible quality requirements. This opens a trade opportunity for Indian firms that would fail to meet the higher standards of developed countries.

And India shares certain cultural and institutional similarities – such as language and institutions based on a common colonial past, particularly in East Africa – which facilitates investment in areas where other foreign investors would be dissuaded.

For example, while Chinese investors have focused on manufacturing and extractive industries, Indian investors have branched into domestic services. Being in close time zones, fluent in English and having similar legal systems are all advantages in the provision of business, legal and telecommunications services. This allows Indian services providers to expand and diversify both destinations and type of services.

What’s in it for African countries?

African countries have traditionally exported to developed countries and more recently to China. With the increasing importance of India as a trading partner, African countries can reduce their reliance on a limited number of importers and diversify their trade.

Although Africa mostly exports raw materials to India (oil from Nigeria and diamonds from South Africa are among the top imports), a more active engagement with India could boost other sectors. This would further help diversify the continent’s trade.

Through greater ties with India, African firms will have access to a gigantic market whose consumers have similar level of income. Again, this is a chance to specialise in products with similar quality standards.

Africa can also benefit from the large pool of skills India offers: engineers, managers and other professionals are available at a short travel distance to provide essential services and help build Africa’s professional capacity. Experience with similar challenges (such as poor infrastructure), which require the ability to operate with scarce resources, can facilitate the exchange.

What are the challenges?

It’s tempting to try and compare Indian investment and Chinese investment in Africa, as if one is ‘better’ than the other. In reality, Africa needs capital – whether it comes from China or India. We should be thinking about how investors can coordinate better, wherever they are from, not treating them as mutually exclusive.

In fact, Chinese and Indian investments should join forces. So far, Chinese investments have struggled to link with African domestic markets. Indian investments can provide the missing link by investing in those sectors – services, for example – required by the Chinese firms to operate. Trilateral cooperation (China-India-Africa) can maximise the benefits of the individual investments.

Another challenge will be making the necessary policy changes for stronger trading relationships. For example, ensuring the free temporary movement of people in the provision of services would allow skilled Indian professionals to transfer their skills into African production processes. And the widest duty free access possible to the Indian market will be essential for African exporters, but also key for Indian firms to be competitive.

As last week’s summit made clear, the India-Africa relationship is growing stronger and governments are signalling their intention to institutionalise this further. But to deliver real benefits for people in two of the world’s poorest regions, they need to put the right policies in place to back up their good intentions.