This is a crucial time for global climate action. World leaders must make evidence-informed policy decisions. Our cross-cutting work offers new research and analysis across finance, trade and adaptation.

UK Chancellor Rishi Sunak is presenting the next Comprehensive Spending Review to Parliament on 26 October, just five days before the start of COP26. If media reports are to be believed, the Treasury is pushing the Foreign, Commonwealth and Development Office (FCDO) to cut its aid spending by a further £2 billion. A large proportion of those cuts would likely be borne by the lower-income countries that are also most vulnerable to climate change.

COP26 President Alok Sharma and the FCDO have thrown tremendous diplomatic effort into securing successful climate negotiations. Yet other parts of government have not always aligned with this vision.

Domestically, Cumbria County Council approved a new coal mine (the decision was subsequently reversed); the Oil and Gas Authority is reviewing a new oil field off the Shetland Islands; and the Treasury continues to freeze fuel duties. Internationally, climate considerations were stripped from a new trade deal with Australia, a notorious laggard on climate change, while the Treasury’s cuts to official development assistance (ODA) at short notice have angered low- and lower-middle income countries.

Despite these decisions, the UK has argued that it is committed to climate leadership and the COP26 presidency, based on its ambitious emissions reduction targets and on its promise to double climate finance between 2021–2025 compared to 2016–2020. Is it on track to deliver?

The impact of ODA cuts

In 2021, the UK has slashed its aid target from 0.7% to 0.5% of gross national income (GNI). When coupled with the pandemic-fuelled economic crash, this meant that ODA was nearly halved. The FCDO’s recently published accounts confirm that its budget for strategic priorities will be less than £4 billion in 2021/22, down from £7.1 billion in 2019/20.

According to media reports, the Treasury is now pushing for the FCDO to further slash expenditure. Instead, the UK would meet the 0.5% target by counting three categories of spending:

Taken together, these three categories could easily require a further £2 billion worth of cuts to keep UK aid below 0.5% of GNI. It is reasonable to assume that, once again, the bulk of cuts would fall upon the resource budget used for FCDO’s strategic priorities. In the short term, it is difficult to make significant savings from staffing and operational budgets. Resources for capital spending are also more likely to be protected, because this creates assets and therefore does not affect the headline numbers on government borrowing in the same way. Funds for subscriptions, the British Council, BBC, EU and so forth have been relatively protected. Even if 10% savings were found across these budget categories, then a further £1.5 billion would need to be found from FCDO’s resource budget taking the total resource budget available for ‘priority spending’ down to just £2.5 billion – a fall of 70% relative to the 2019/20 outturn. 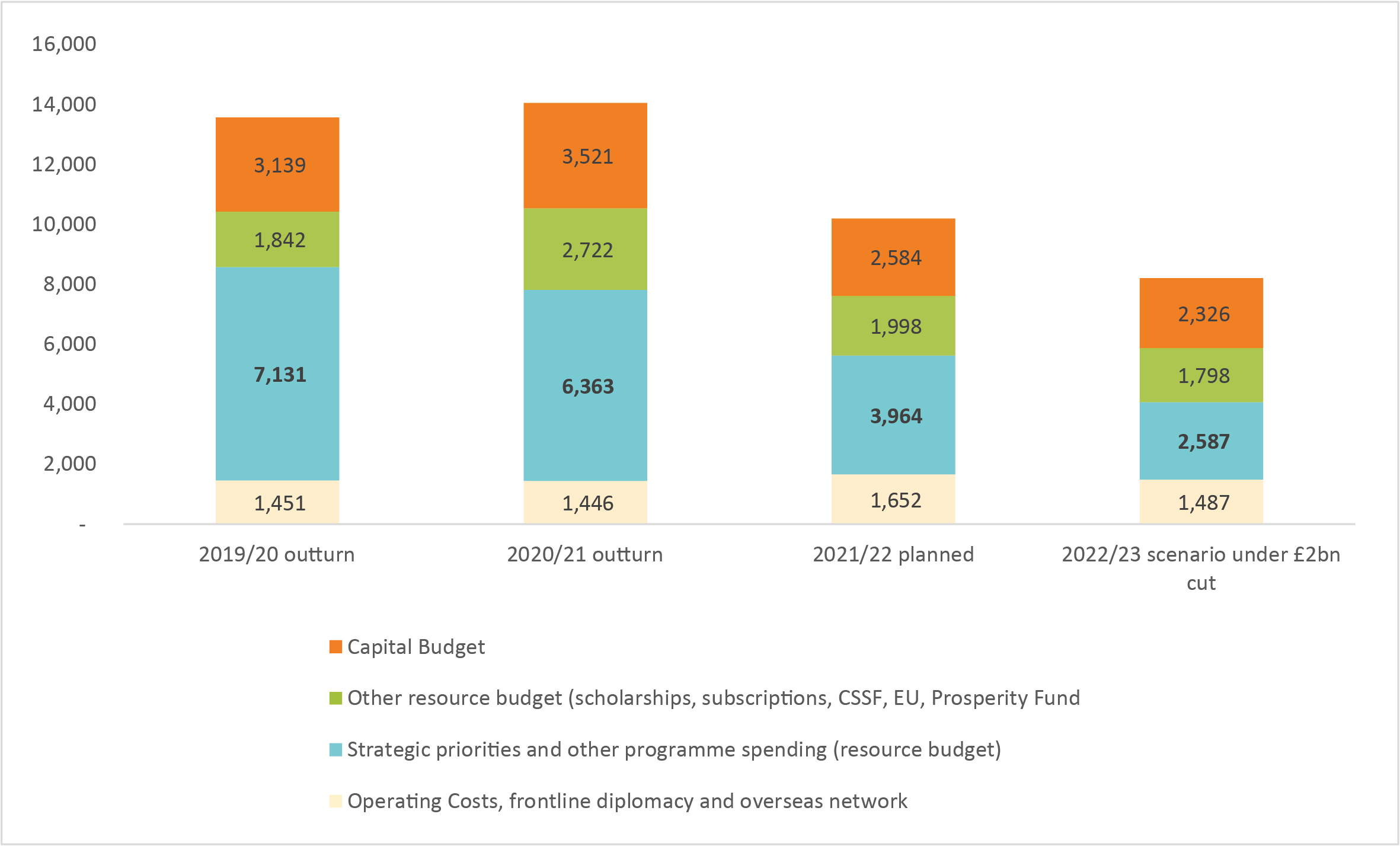 Theoretically, the UK’s climate finance budget is distinct from ODA. The UK will therefore allegedly be doubling its climate finance even as spending on ODA priorities falls over two-thirds.

Over the next five-year period, achieving the UK’s international climate finance target looks to be even more of a stretch. Spend will need to average £2.3 billion a year, a 140% rise relative to the most recent year for which we have data on actual expenditure. If the FCDO were to retain a similar share of overall spend on climate, it would need to be spending almost £1.5 billion on climate finance per year. Given cuts to other parts of its budget, the FCDO could consider renaming itself the Department for Delivery of International Climate Finance.

Source: Authors’ own, based on data from FCDO accounts and scenario planning 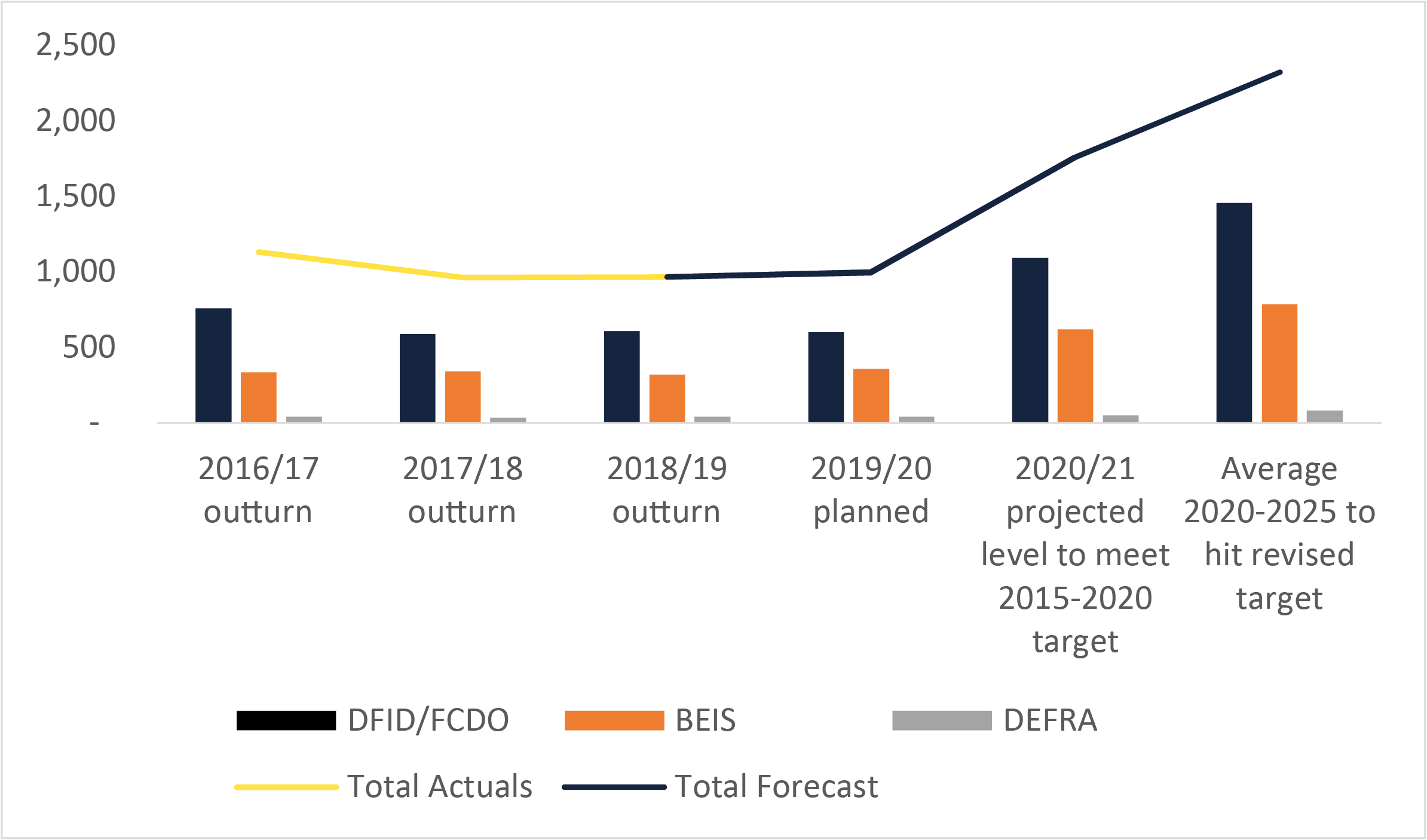 Source: Author’s own, based on data from ICAI report

Hitting the target, missing the point

Irrespective of whether the UK meets its climate finance targets, the ongoing cuts to ODA undermine its credibility in advance of COP26. At COP15 in Copenhagen, developed countries agreed that climate finance should be ‘new and additional’ to ODA; instead, the UK is blatantly scrapping aid spending to maintain climate finance.

Table 1: Recipients of bilateral ODA who are among the 20 most vulnerable countries to climate change (ranked by the University of Notre Dame)

Source: Authors’ own based on data from FCDO accounts and an assumed further reductions based on £2 billion cut.

Climate finance is always one of the most contested issues in the climate negotiations but will be under particular scrutiny at COP26 for two reasons. First, developed countries have fallen short of their pledge to provide and mobilise $100 billion a year from 2020 for developing countries to mitigate and adapt to climate change. Second, negotiations are meant to start around the new climate finance goal, which will supersede the $100 billion-a-year target from 2025.

The $100 billion is a drop in the ocean relative to the cost of mitigating and adapting to climate change. It is important not so much for the volume of finance than as a signal of good faith and acknowledgement of climate injustice by developed countries.

The UK’s sleight of hand with ODA and climate finance therefore risks sabotaging negotiations. If the Treasury slashes budgetary commitments to climate finance days before COP26 starts, developing countries – which have typically contributed fewer per capita emissions – will rightly question why they should bear the costs of climate action and whether they can trust the pledges of developed countries. The UK would be in a far stronger position if it treated the 0.5% target as a floor rather than a hard ceiling.

In 2021, the UK has had a unique opportunity to showcase its climate leadership and diplomatic credentials. Instead, near-sighted decisions by the Treasury are threatening success at COP26. This is a tragedy for Global Britain – and for the planet.

Cleaning up their act? G7 fossil fuel investments in a time of green recovery