Hang on, do we know what a Theory of Change approach actually is?

At a workshop at ODI in April 2015, we sought to work out how different people were using the term, for what purpose, and with what effects. More detail on that can be found here and here. What’s emerged is that the term ‘Theory of Change’ is being used in at least three overlapping ways:

As a discourse, asking ‘what’s your Theory of Change?’ has become an increasingly fashionable way interrogate someone’s assumptions about change (and flummox newcomers to the terminology).

As a tool, it’s rapidly rivalling (and being used in conjunction with) the log frame. Here it’s often used as a way of making explicit the assumptions connecting (watch out, here comes aid jargon) activities, outputs and outcomes in reporting for donors.

Taking a Theory of Change approach will likely include use of a tool in some form, but is broader, reflecting a desire to embed a critical and adaptive approach in organisational practice. This is perhaps the most exciting, as it builds in what we know about how aid organisations can make effective contributions to social change in complex environments.

So where do we go from here?

The following principles (not rules) seek to ground Theory of Change approaches in this emerging knowledge – and are rooted in a concern with persistently damaging problems within the industry.

However, the aim is to not to be prescriptive: debate them, critique them, and develop your own! 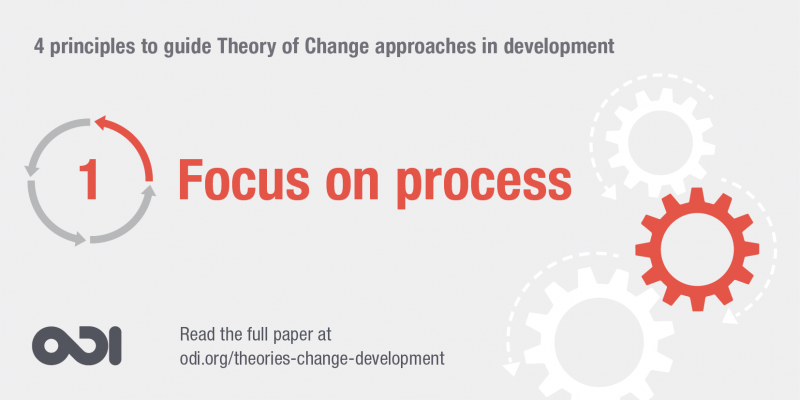 A Theory of Change approach can challenge this, but in order to do so, it cannot be just a document which is completed at the start of a project and then sits gathering dust on a shelf. Regular engagement with underlying assumptions is essential. I know this sounds ambiguous.

I’m not sure a fully-fledged toolkit is the answer here, since these tend to be a fast way to slow down creativity. However as demonstrated by The Asia Foundation, there are some light-touch methods such as project timelines or programme diaries which can spark critical thinking and feed into broader strategy testing. 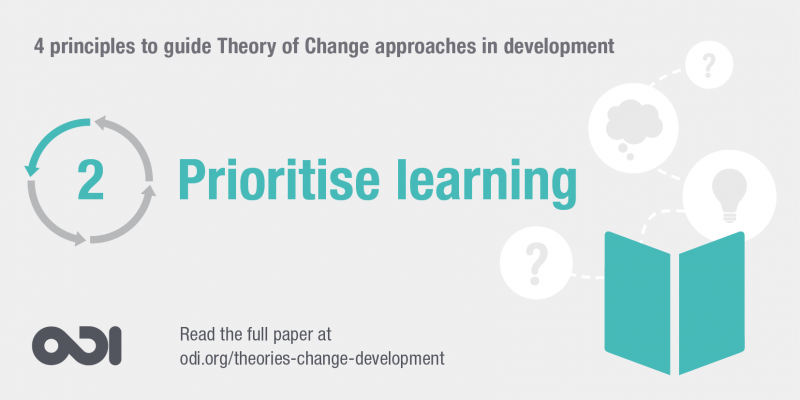 For a reflective and adaptive approach to become mainstream in Theory of Change approaches – and indeed in development more broadly – understandings of what accountability and learning mean need to shift substantially.

In many other industries, from business to football, managers are praised for adapting to changing circumstances; in development this is currently not the case. Shouldn’t we move emphasis from monitoring and evaluation (M&E) to learning and adaptation (L&A)?

Having accountability for learning could be a promising route: there is no reason why, for example, programmes could not be held accountable for how much has been learnt over time, how they have adapted to new information and why this adaption has been important for improved development outcomes. This cannot be the case if accountability continues to be conflated with accountancy. 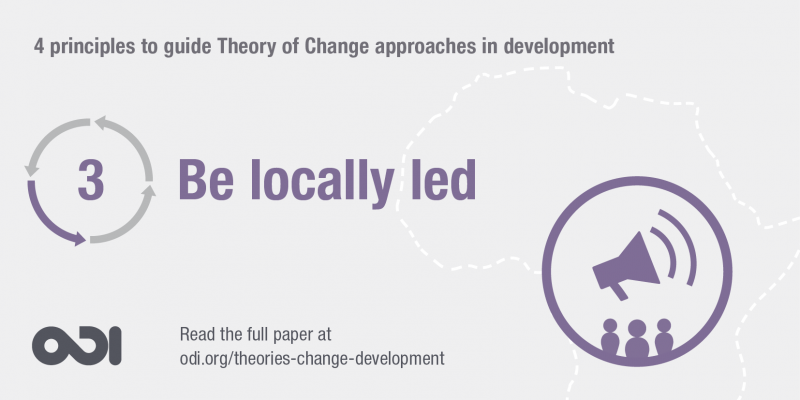 One of the dangers with a Theory of Change approach is that it remains a top-down process: imposed by a narrow group within organisations or programmes, or excluding the input and views of ‘beneficiaries’.

As one participant highlighted in the April 2015 workshop, by engaging local partners and beneficiaries in the process, Theories of Change can be used as a stick with which to beat donors, rather than the other way around.

Where to begin with this? For a start, let’s drop alienating and confusing terminology and focus on genuine debate and discussion with partners over strategies and goals. I don’t use the acronym ‘ToC/s’ and I’m not sure if it matters if you use the term ‘Theory of Change’ (phew, right?!).

Peace Direct seem to work along these lines by engaging local organisations to develop their own Theories of Change. This shows how Theory of Change approaches are also about organisational ideology; as a ‘bottom-up’ organisation, we might expect this from them, whereas for others, this would need to be a significant step-change in the way they think and work. 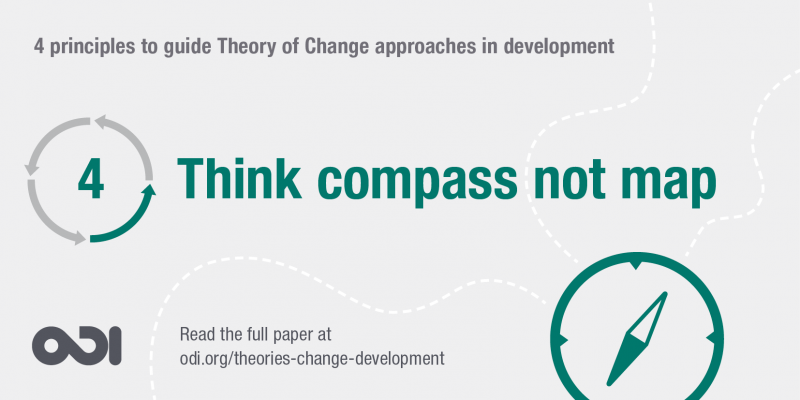 For some leading Theory of Change advocates, the process involves developing a ‘roadmap to get you from here to there’. The problem here is that this way of thinking can recreate the fallacies in current approach to logframes, such as assumptions of linearity.

Far more useful is the idea that it should be a ‘compass for helping us find our way through the fog of complex systems, discovering a path as we go along’.

Acknowledging ‘complexity’ does not mean ditching planning processes altogether, but recognising that often plans reflect best guesses about the future (and about the past too) and will likely shift over time.  There is much we do know about getting from ‘here to there’ but the journey will be more often be suited to a sailboat than a train.

Can any of this realistically be operationalised in light of the unrealistic, time-consuming and misleading ‘results agenda’?

Despite all the problems, there is some room for manoeuvre, based on some interesting reforms within donors (such as DFID’s smart rules) and a growing evidence base for the approaches outlined above. This needs to be capitalised on – and the paper released today gives some suggestions for getting us there.

Of course, there is a need for modesty when considering what can be achieved. The reinvention of tools and approaches is in part a reaction to the persistent tensions in the industry; potentially helpful but not tackling the root of the problem.

Perhaps, the greatest contribution of Theories of Change may well be to help carve out a small but productive space for genuine critical reflection within aid organisations. This may not sound too radical to those outside the industry, but within it, this is an important and pressing need.