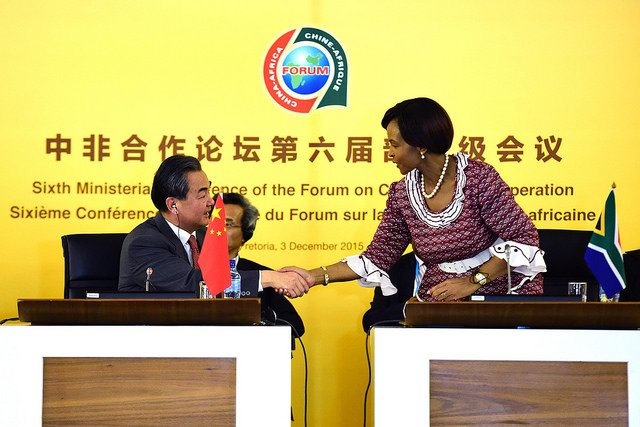 The Forum on China-Africa Cooperation (FOCAC) is organising its 7th summit in Beijing on 3-4 September 2018. It brings together China and the 53 African countries with which it has diplomatic relations (all but Swaziland), plus the African Union.

Based on previous summits, China will probably pledge even higher contributions to African countries this year. These have already increased massively from US$5 billion in 2006, to US$60 billion spread into various funds and contributions in 2015.

Apart from these pledges, what will be on the table at the FOCAC summit? Here are two topics that are likely to be on the agenda, and one that probably will not.

As a major flagship project of the Chinese government, the Belt and Road Initiative (also known as ‘One Belt, One Road’) will likely be discussed at FOCAC. Officially launched in 2013, it aims to increase connectivity among countries through infrastructure and it links China to the eastern coast of Africa through the ‘Maritime Silk Road’. As well as Kenya, Djibouti and Egypt, the scope of the initiative is expanding to include others such as Ethiopia and Tanzania.

Many projects in Africa have benefitted from China’s construction capacity and financial contributions, from the Standard Gauge Railway and the Lamu port in Kenya, to the port of Bagamoyo in Tanzania. China is also involved in the construction of industrial parks and special economic zones in Africa. During the summit, we can expect China to discuss these important projects, and potentially plan some new ones in the bilateral meetings alongside the official FOCAC events.

This infrastructure is necessary for Africa’s economic growth – although it’s not sufficient to promote inclusive development. This requires creating good, productive jobs for the majority of the population, including the most vulnerable groups. Recipient countries must use this infrastructure to attract investment in labour-intensive manufacturing activities that can generate employment for the many, rather than only providing benefits for a limited number of people.

Which brings us to the next point: Africa’s industrialisation.

Industrialisation is a priority for many African countries, even more so now than in 2015. Rwanda’s National Strategy for Transformation and Kenya’s Big Four Strategy are perfect examples of recent policies putting industrialisation at the forefront.

Africa’s industrialisation is not a new topic for FOCAC. During the 2015 summit in Johannesburg, Xi Jinping pledged to build or upgrade industrial parks, provide technical assistance and build capacity for manufacturing in Africa, and to set up a China-Africa Industrial Cooperation Fund.

During the FOCAC summit, China will make official pledges of financial and technical assistance to the manufacturing sector. It may also announce manufacturing investment deals, especially at the bilateral level, on the side.

Not on the agenda: debt and sustainability

Finally, the issue of debt sustainability is not likely to appear at the forefront of the FOCAC agenda – but will be at the back of everyone’s minds, especially in light of recent concerns about Africa’s public debt.

This is not uniquely related to Chinese finance. Many African and Asian countries have taken loans from Chinese and other foreign institutions to develop much-needed infrastructure. But governments receiving these loans don’t always consider whether the project will generate economic growth and whether the debt can be serviced.

This has led to dramatic consequences, such as the handing over of the Hambantota port in Sri Lanka to a Chinese company. Other cases can become similarly critical, such as the Standard Gauge Railway in Kenya and the Entebbe Expressway in Uganda. And many, including in Beijing, are increasingly worried.

Loans are very useful if countries manage the money properly and spend it on activities that promote inclusive economic growth. One way that China and other development partners could really support African countries is to develop their capacity to strike these deals, with both Chinese and non-Chinese partners – and to evaluate the projects and associated sources of finance to understand whether they will bring the desired outcome, and if they are financially viable.