When nation states came together to agree the Sustainable Development Goals (SDGs) in 2015, it may have been multilateralism’s peak.

But as ministers prepare to gather in New York next week for the High-level Political Forum (HLPF) – the annual official monitoring moment for the goals – the mood is very different. International cooperation is crumbling, threatening that sense of collective ambition.

For this summit to succeed, we need governments to be honest about failure and rigorous in analysing progress. In preparation for next year’s head of state-level summit (there are two HLPFs next year, the September one as part of the UN General Assembly), I would like to see a new initiative to produce comprehensive country-level data on progress to ‘leave no one behind’ (LNOB) – as well as renewed engagement from high-level champions, and a commitment to bring the financing discussion together with that on policy. The political declaration from this week’s HLPF can set these things up.

The benefits of embracing failure are by now a cliché, but few high-ranking officials want to admit to challenges against the backdrop of the United Nations.

Last year’s HLPF did attempt to corral member states to give their implementation reports on multi-country panels, making discussion of pitfalls, as well as success, more likely.

But this year many member states have opted to give their reports (called Voluntary National Reviews, or VNRs) standing alone, so there will be less opportunity for challenge, debate and genuine engagement.

Of course, VNRs are not the only format for reporting on SDG progress. Germany, among the first batch of countries to present in 2016, has this year conducted a comprehensive peer review of its sustainable development strategy, meaning its commitments, plans and outcomes have already been forensically picked over. Others should follow suit, and fully present challenges as well as high points.

If progress is to be the sole focus of the VNRs, they’ll need to be more rigorous than in the past. Just presenting anecdotes will not allow us to get a full understanding of what is changing and what is stuck.

The latest version of our ‘leave no one behind’ index is a contribution to that rigour. It assesses the readiness of 86 countries (the ones presenting their reviews at the HLPF this year, and those who did so last year) to deliver on the key SDG commitment to reach the left-behind first, looking at data, policy and finance.

It shows there has been some progress since last year, with a quarter of countries upping their readiness score. Most of that improvement has been in data, reflecting an increase in the number of countries where household surveys have been conducted in the last three years.

But it also shows that while a handful of countries have aligned their policies and budgets to what’s needed to support the poorest and most marginalised, this was offset by a similar number where alignment had deteriorated. And in more than half of the countries assessed, climate adaptation plans fail to target the most vulnerable. This should worry delegates at the Forum, whose theme is resilience. 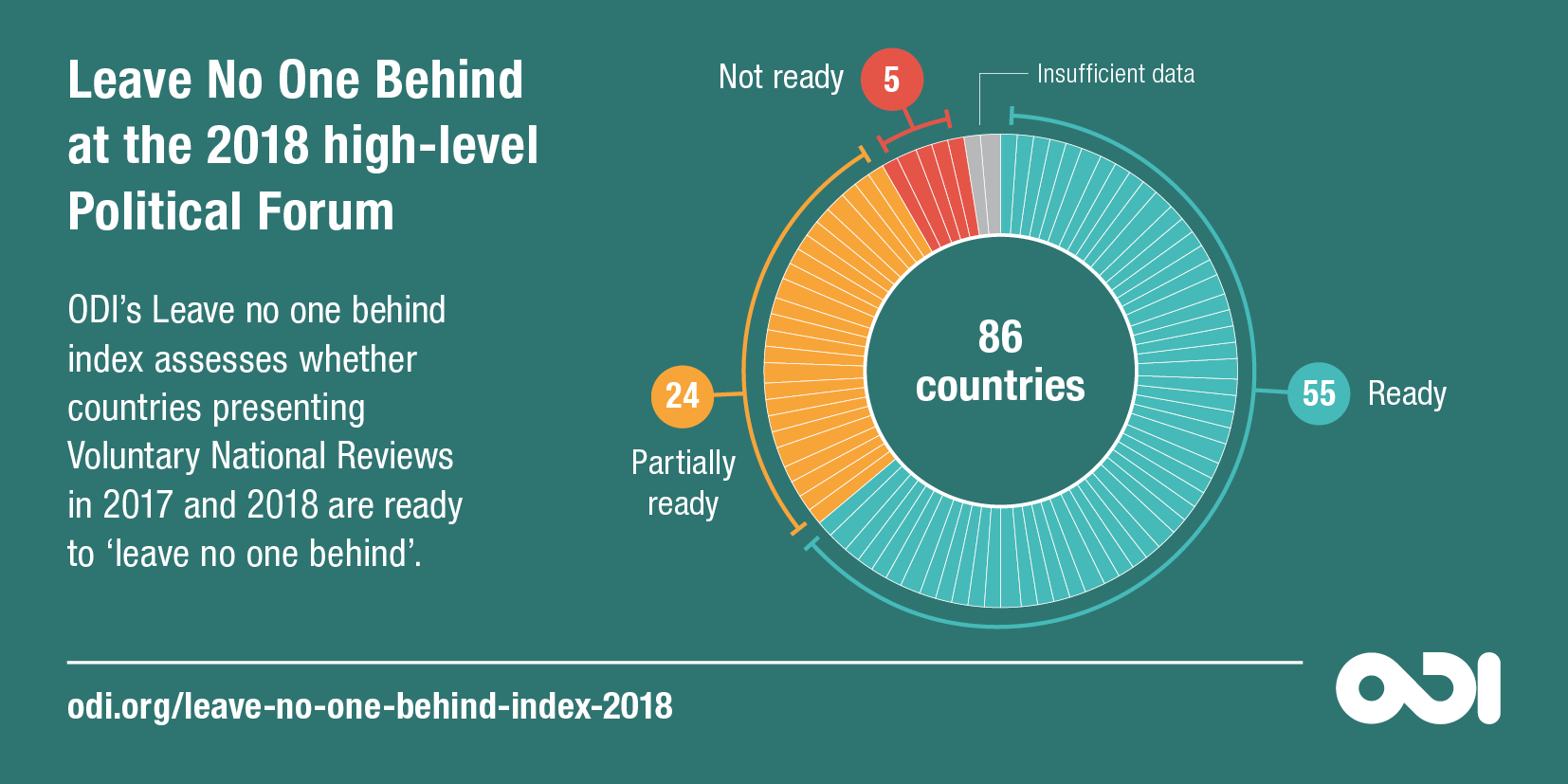 Nothing we’ve seen so far – the single country reviews, or even the official SDG progress report from the UN, which (intentionally) doesn’t break down outcomes country by country – provides the deep, robust analysis needed for a full examination of where we are with the 2030 Agenda for Sustainable Development, and the challenges ahead. Events this week are unlikely to deliver it either.

This must now be the focus for next year, when there will be not one but two fora (the usual July one, plus the extraordinary head of state-level HLPF that takes place under the auspices of the UN General Assembly every four years).

What’s called for is an exercise in crunching statistics and other information contained across all VNRs and on all goals and commitments, producing a comprehensive data set at country-level – and where possible, more disaggregated levels – on progress across all targets.

A high-level panel, perhaps chaired by current or former heads of state, could then review the progress that such analysis would capture and set out what is needed to take SDG implementation up a level or three.

Finally, so long as the financing discussion is kept separate from that on policy, realistically we won’t the achieve the Sustainable Development Goals. This September, UN Secretary-General Antonio Guterres will host a high-level meeting on finance, with a focus on the SDGs. While there are no details yet of this meeting, it would be useful for the ministerial declaration coming out of this week’s HLPF to reflect on the need to join the money with the data and policy.

Discussion and commitments on any of the above this week will make for an HLPF that is worthy of its unspoken – and huge – task: carrying the weight of multilateralism on its back.