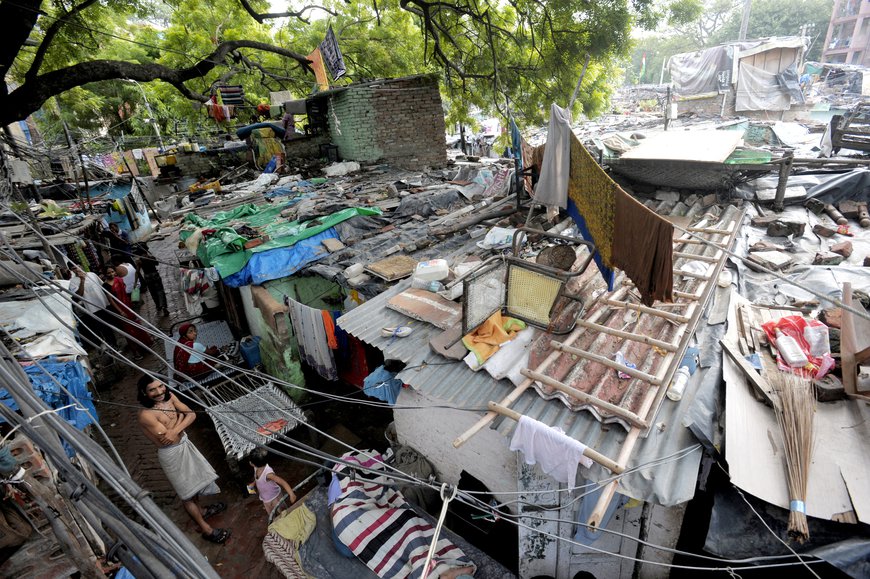 Over half the world’s population – around 4.4 billion people – live in cities today, and 80% of global Gross Domestic Product (GDP) is generated in cities. But of these 4.4 billion city dwellers, almost one billion live in slums and informal settlements and are facing some of the worst forms of poverty and deprivation. Another two billion people are expected to join these ranks over the next 30 years, which is roughly 183,000 people each day.

Their houses are of poor quality and are overcrowded. Millions are at risk of forceful eviction. They lack access to safe and readily available water, sanitation, drainage and solid waste collection services, healthcare, education, and policing. They are the most affected by climate change,  and have some of the worst jobs. For example, waste picking by women who are considered low-caste in Indian cities.

While slums and informal settlements are characteristic of cities in low- and middle-income countries, cities in high-income countries aren’t doing too well either. In London for example, there is an ‘appalling’ surge in homelessness because of unaffordable housing. The Mayor of London estimates that the city needs around 31,000 homes each year at social rent levels (i.e. at around 40-60% of market rent levels). While progress has been made towards addressing this annual need, much more remains to be done.

The largest and most influential conference on cities – the 10th World Urban Forum taking place this weekend – has led me to think about the darker sides of city life and their implications. Hosted by Abu Dhabi, this year’s theme is "cities of opportunities: connecting culture and innovation.’’ And I have two pressing questions to share.

What has led cities globally to become "missed’’ opportunities for people in poverty? And what can cities do to improve their lives?

The answer lies in how cities have developed over time and how these developments have affected people’s lives. Certain patterns of urban development have segregated people, creating distinctly poor and affluent neighbourhoods. In many cities today, changes to the urban form are unplanned and uncoordinated, mainly because planning frameworks are incomplete and lack institutional coordination. As a result, the built environment of cities has locked some communities into deprivation.

Urban planning in Bangladesh, for instance, happens on "an ad hoc basis, based on political, donor and public demand.’’ While data and technology have become more accessible and affordable, they are sporadically used to respond to the planning needs of city districts. Dhaka is the world’s 6th largest city and one of the most poorly planned. The poverty of urban planning is also evident in Pakistani cities like Karachi and Lahore (the world’s 12th and 23rd largest cities, respectively), where "public money has been diverted’’ to mega infrastructure projects at the cost of locally viable, pro-poor, development options.

Five ways to improve the lives of people in poverty

With high levels of poverty in cities today, it’s hard to imagine a future where we’ll all live in dignity with equal rights to cities. However, I can envisage a better future for cities and their most deprived residents if we – as thought leaders, policy-makers, planners and practitioners – can do five things:

Cities should be understood as systems, with interconnected, highly political, and complex ways of working. For instance, how water is supplied depends on land management and whether housing is dense or sprawling. To supply water in impoverished neighbourhoods, authorities need to understand the broader system of which they’re a part of and must work with key players in the land and housing sectors – both within and outside the government.

At the current pace of urbanisation, it is increasingly important that the way we monitor poverty trends is suitable for urban contexts. Some aspects of our data collection and poverty measures were devised at a time when poverty was mostly rural. More appropriate and timely poverty measurement, data collection and analysis of urban poverty can help inform city planning in real time and respond to and anticipate the needs of the poorest.

The SDGs should matter equally to national level governments as well as to local authorities. Without their involvement, Goals like SDG 1 on ending the worst forms of poverty, SDG 10 on reducing inequality within countries, and SDG 11 on making cities inclusive will not be met.

4. Place public policy goals to address poverty at the heart of urban planning

The inclusion of public policy goals within urban planning processes and outcomes will help correct some of the imbalances of service provision including for water, sanitation and sewage, housing, and public transport.

5. Share experiences and knowledge both across and within cities

From solutions to homelessness, to successful slum upgrading and affordable public transport, knowledge sharing will help cities struggling with these issues to learn from each other’s experiences.

The World Urban Forum should address the concept of cities of opportunities – or missed opportunities – from this lens. With over 17,000 participants expecting to attend, the delegates should think about the reality of cities today and come up with clear insights on how to improve their design and city life for people in poverty.