With a High-Level Meeting on the topic at this year’s United Nations’ General Assembly and debate during the US presidential primaries and elsewhere, there can be little doubt that Universal Health Coverage – or UHC – has become a hot political topic.

Yet, despite all the hype, there are disagreements over whether UHC, which aims to ensure that all people receive the health services they need without financial hardship, is even achievable.

But new research sheds light on the experience of almost 50 countries that have attained UHC or made strides toward doing so. This research indicates that while there isn’t a one-size-fits-all approach, there are parallels – and opinions on what aids or prevents UHC are often misinformed.

1. “Only stable governments can aim for UHC”

It’s often thought that countries strive for UHC during periods of stability. But research shows that most major moves towards UHC are triggered by a change in circumstances that breaks a country’s usual pattern that has prevented healthcare reform.

Indeed, seven out of 10 countries progressed towards UHC while rebuilding in the aftermath of fragility, for example during post-war reconstruction (Belgium, UK), following civil strife (Thailand), or after military rule (Brazil). Fragile contexts tend to be periods of self-reflection during which countries decide what they want to be and where there is a need for unity. Combined, these forces can create political appetite for UHC.

It’s much more difficult to roll out UHC during fragile times – finances are often limited and subject to competing claims. But fragility appears to be a powerful motivation for UHC: disruption weakens powerbases that may oppose UHC and governments use healthcare to build legitimacy. 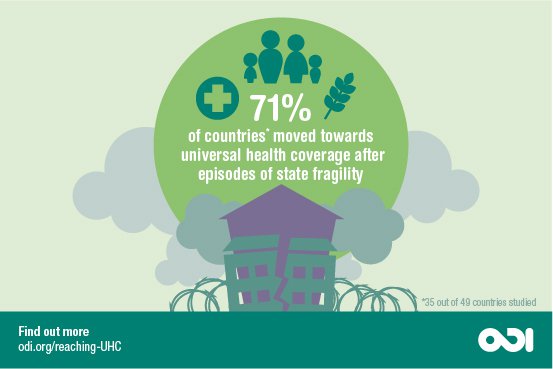 Cost is often cited as a barrier to UHC – as our research shows. But the gross national income in low- and middle-income countries where UHC is seen as cost-effective is only $1,524 more than those that think it is not – a 13% difference. That said, as with all policy-making, decisions on UHC are driven by a willingness to make trade-offs. Economic growth makes these trade-offs easier and therefore securing UHC more likely.

Rather than financial constraints, capacity is disproportionately linked to poorer countries. In other words, the main barrier to expanding health coverage in resource-constrained environments may be the ability to get a system off the ground and maintain it – rather than money. 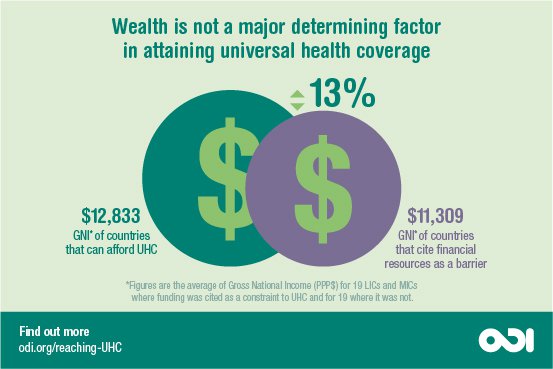 3. “Governments set out to achieve UHC when they start investing in health”

It seems logical that governments with ambitious health care plans start with a blueprint for reaching UHC. But our research shows that around 75% of governments do not aim to achieve UHC when they start investing in health. Instead they aim to reach this goal through iterative reforms, with early interventions typically targeting a limited proportion of the population.

For example, the UK government introduced mandatory health insurance for workers in 1911. This scheme was expanded several times in the 1920s before the government passed the National Health Service Act in 1946, which nationalised most of the UK’s healthcare provision into one unified service.

Meanwhile, in Thailand, the government moved into healthcare provision in 1975 vis-à-vis the rural poor; and, in the 1980s, it set up systems to cover public sector workers and those in formal employment. Then in the 2000s, Thailand moved to UHC through providing a defined range of treatments, initially with limited user fees that were later removed.

4. “Even if achieved, UHC is likely to be reversed”

Healthcare can be a contentious political issue. Dissatisfaction often remains strong until countries reach universality. But once achieved, UHC is usually robustly accepted across the political spectrum.

By this point, health tends to become one of the largest and most politically sensitive part of government – indeed, it was one of the two main topics in last week’s UK general election. Instead of questioning the state’s role in health provision or the structure of the health system, debates become dominated by issues of incremental reform.

Moreover, this consensus tends to prevail even in difficult situations. Around eight countries in our sample (15%) appear to have faced threats to their health system – including armed conflict in Ukraine and state fragility in Tanzania.

But despite threats to UHC, the research identifies little evidence of countries retreating. In Thailand, for example, governments have found it politically too difficult to reverse even small parts of its health system. And while many African countries reintroduced user fees in the 1980s, this tended to result in social unrest, with decisions later being reversed.

UHC: not a myth, but a reality – if there is the will

The implications are clear: all countries have the potential to move towards UHC. If post-conflict countries and those undergoing reconstruction can find the necessary resources to create stable health systems, and if countries that can afford UHC are only slightly wealthier than those who claim they cannot, this suggests that the main barriers to UHC roll-out are political. With the United Nations having decreed the importance of UHC, governments across the world, regardless of whether rich or poor, must act to ensure that political rhetoric becomes reality – as we know it can.