The US formally withdrew from the Paris Agreement on climate change on 4 November. Its departure marked the end of four years of Donald Trump’s presidency, which has had catastrophic impacts for the climate.

Trump’s legacy: propping up polluters during a pandemic

Between 2017 and 2019, the US government provided an average of $7.6 billion to fossil fuels every year. Around $2.5 billion of this public support went to support exploration, production and transportation, while a staggering $4.8 billion went to subsidising consumption of coal, oil and gas across the country.

And then Covid-19 struck.

As part of its fiscal stimulus package, the US allocated nearly $100 billion to support different energy types. Over $72 billion flowed to fossil fuels, the vast majority of which went to airline companies. The US provided more support to fossil fuels than any other country, guaranteeing that its economic recovery would be powered by oil and gas. 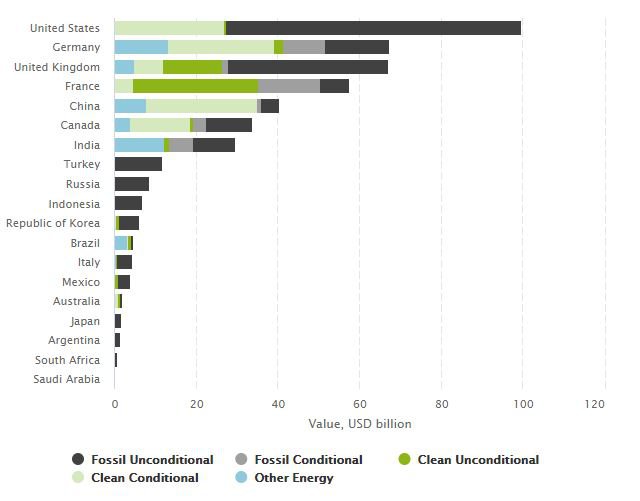 Sometimes it’s easy to get lost in these numbers. A few billion here and there seems miniscule considering the size of the US government or companies such as Exxon, Chevron or Peabody Energy. So let’s think about what those funds could achieve if spent elsewhere.

In 2019, the US federal government spent $644 billion on Medicare, which provided health insurance to 59.9 million US citizens. At these rates, spending $72 billion on Medicare rather than fossil fuels could have provided health insurance for over 6.7 million additional US citizens. Instead, the government channelled taxpayers’ money to an industry that produces toxic air pollution during a respiratory pandemic that has cost nearly 300,000 US lives and pushed thousands more into bankruptcy.

A confession: we have almost certainly underestimated how much public money flowed to fossil fuels over the last four years. Many top fossil fuel-producing states, such as North Dakota and Wyoming, do not reliably report how much revenue they lose from tax breaks for coal, oil and gas.

The Trump administration also supported fossil fuel producers in other ways. The federal government has rolled on environmental regulations, including for methane limits, offshore drilling safety, and power plant emission standards. The federal government has also begun using new tools to reduce costs for the fossil fuel industry, such as threatening private banks with the loss of public subsidies if they do not continue financing oil and gas projects.

We cannot even fully quantify the US’s stimulus package. The cost of many measures, like new tax breaks, environmental and health regulation rollbacks, royalty waivers, and corporate bond buybacks for the fossil fuel sector, will only become apparent over the next few years.

These few years will be all-important for slowing global warming, but also for the US’s recovery from this terrible virus.

Priorities for the Biden administration

Biden and vice-president-elect Kamala Harris have laid out a bold plan for a clean energy revolution. The new administration has embraced the opportunity to create millions of jobs while improving air and water quality – a win for public health and social justice.

But there is a fierce debate raging within and beyond the Democratic party: how to pay for this vision?

Ending public support for fossil fuels provides part of the answer. Reallocating these funds for low-carbon infrastructure and skills development across the country would ensure a just transition to a cleaner and more dynamic economy. Our research reveals the four major areas where taxpayers’ money continues to prop up the fossil fuel industry:

With Biden and Harris set to be sworn in next month, we look forward to welcoming the US back into the Paris Agreement and seeing whether it can deliver its bold plans for a greener, fairer recovery.