The past year has made all too visible the consequences of the inequitable distribution of Covid-19 vaccines, tests and treatments. This is true within countries, and even more glaringly, between them. Richer countries have been repeatedly singled out for policies and actions that advance their own (narrowly conceived) domestic interests at the expense of people living in poorer countries and the global public good.

Kevin Watkins refers to ‘the abject failure of G7 and G20 political leaders to equitably share’ vaccinations as ‘the defining hallmark of the pandemic’. WHO Director-General Tedros Adhanom Ghebreyesus has described inequitable vaccine access as a ‘catastrophic moral failure’, the price of which will be ‘paid with lives and livelihoods in the world’s poorest countries’. Ayoade Alakija argues that vaccine inequity reinforces global inequalities, with Africa being ‘always last in line, the afterthought’.

The statistics brook no other conclusion. As of March 2022, close to 80% of the population in high and upper-middle income countries had received at least one vaccination against Covid-19, compared with fewer than 15% in low-income countries. Indeed, fewer than 40% of people had received even one dose in 62 of 199 countries or territories. On current trend, the WHO target of vaccinating 70% of people in all countries by September 2022 is unlikely to be reached, despite the public endorsement of G20 leaders. There are concerns that the rollout of Covid-19 tests and therapeutics is following a similarly inequitable trajectory.

In a new policy brief, I investigate through a measurement lens some of the claims made about G20 countries’ efforts to respond to the global shortage of vaccines, tests and treatments. A focus on the systematic monitoring of G20 country policy responses to Covid-19 facilitates a better understanding of the extent to which they have supported global health and where they fall short, and highlights actions these countries could take to place equity at the front and centre of recovery efforts. The brief first identifies the policy areas that matter most and the data and indicators that are most appropriate for measuring them. This exercise led to a proposal of 9 indicators in 3 dimensions: 1) financing, 2) excess vaccine procurement and the redistribution of any surplus, and 3) the promotion of intellectual property sharing and medical exports (Table 1). 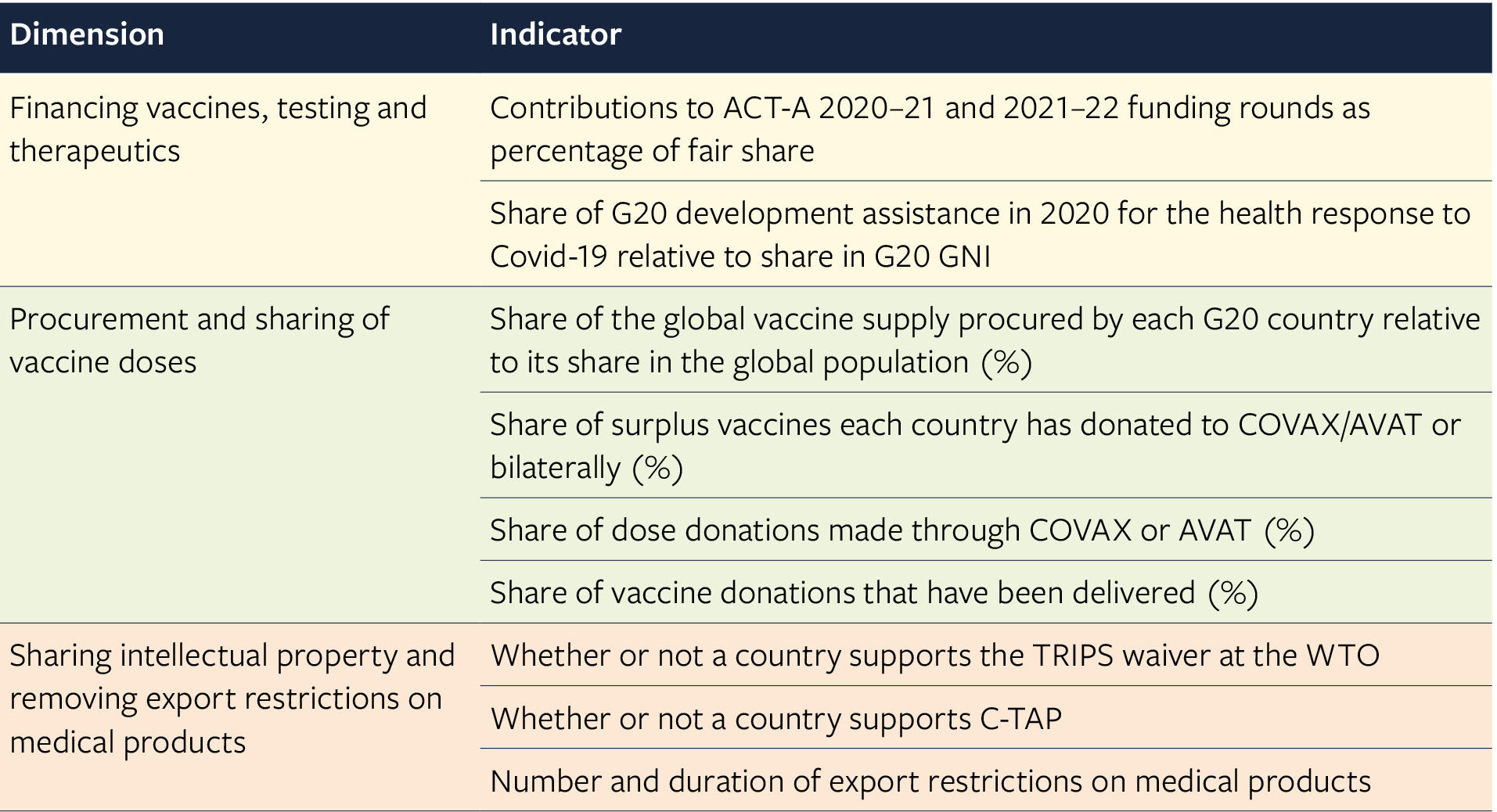 A few principles informed the selection of data and construction of indicators. We sought conceptual coherence and data that is publicly available. We constructed indicators to account for countries’ disparate economic strength and populations. For example, financing is expressed as a percentage of each country’s ‘fair share’ or its GNI. Where a given variable is not relevant to a particular country, it is not included for that country. For example, we did not expect countries that did not procure surplus vaccines to make any donations, although South Africa did so. We provide country scores for each dimension (based on averages of the indicators therein) and options for composite index construction, but stop short at presenting a definitive aggregation and ranking. Rather, we have opted to make our data available for others to take decisions over the relative importance of the dimensions and how to aggregate them. Indeed, Christian Aid has just launched an index based on our data that assigns a relatively high weight to intellectual property rights and medical exports based on their judgement that these variables matter most to an equitable health response.

This monitoring proposal offers a partial snapshot on what G20 countries have contributed and where they have fallen short. However, any such effort faces limitations – not least the need to include indicators that are relevant to most or all countries included, and the absence of systematic data on critical contributions to vaccine equity, such as support to regional vaccine manufacturing. Above all, we do not include measures of actions that no member countries opted to take – most notably, the deals Western leaders struck with pharmaceutical companies are said to have omitted any provisions that would have compelled the companies to share vaccines, knowledge and patents with poorer countries: ‘By partnering with drug companies, Western leaders bought their way to the front of the line. But they also ignored years of warnings — and explicit calls from the World Health Organization — to include contract language that would have guaranteed doses for poor countries or encouraged companies to share their knowledge and the patents they control’.

The gross inequalities Covid-19 has brought into the spotlight will not be remedied by market-led distribution. An active response is necessary, one that is backed by the world’s strongest economic powers. This is not only a moral failure as Dr Ghebreyesus has pointed out, but also a failure of countries to recognise their own self-interest, as vaccine inequity makes Covid-19 a greater threat to all. In revealing huge variations in G20 country performance, irrespective of their incomes, and gaps between what countries have done and what they could have done in the Covid-19 response, this brief seeks to contribute to charting a more equitable course forward.

This Thursday (31 March), an ODI webinar will bring together global experts and senior officials to explore G20 country policy responses to the global scarcity of Covid vaccines, testing and therapeutics. Join us to identify innovative and practical ways for G20 members to respond more effectively and equitably to the continuing global crisis.