A brief history of ROMA

ROMA did not spring from a grand theory of how uptake and impact could be achieved. It evolved over a long period and through the documentation of more than 100 case studies on how research has or has not contributed to changes in policy and practice. It is worth understanding how this evolution happened, as it continues to this day.

The programme of work that developed into ROMA began in 2004 with the idea of ‘policy entrepreneurship’ – the idea that researchers can move beyond simply producing and disseminating knowledge to directly engaging with policy-makers from the earliest stages of research in order to influence their decisions.

This early work proposed that the uptake and use of research-based evidence in policy did not depend just on the quality of the evidence but also on three other factors. Together, these factors were called the RAPID Context, Evidence, Links (CEL) framework.

Figure 2: RAPID’s CEL framework remains a useful way of conceiving of the major factors influencing the uptake and use of research evidence in policy 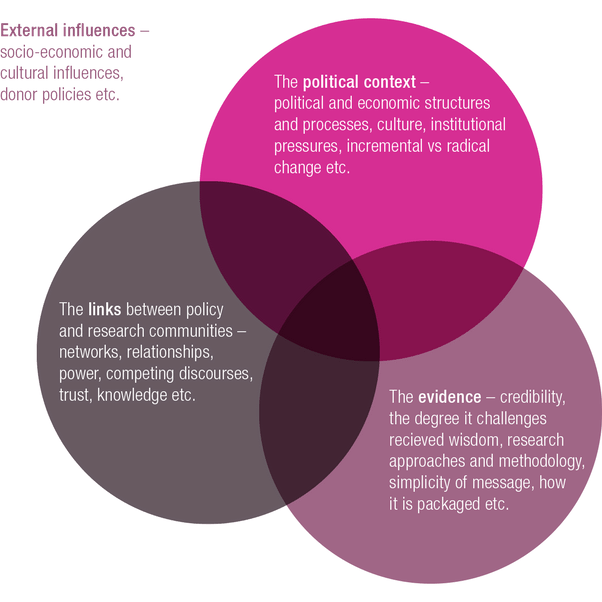 Formulating the CEL framework led to a series of policy entrepreneur workshops. The idea was that, once equipped with a set of simple steps to formulate and implement a plan, sufficient skills and appropriate tools, researchers or others seeking to effect change could navigate this complex environment and improve the likelihood of their evidence being listened to and incorporated into policy and practice.

In 2005, the RAPID team was introduced to the concept of OM (see What is Roma?). OM offered a complete narrative that helped bring together the somewhat fragmented set of policy entrepreneurship tools. By focusing on change, particularly behaviour change, it provided a new way of thinking about the objectives of policy work as changes in the behaviour of those who inform, make, implement and evaluate policy (as opposed to the previous idea that change was only really encapsulated in statements in policy documents).

Importantly, OM introduced two crucial ideas to RAPID’s emerging approach. First was the notion of ‘boundary partners’ — those people or organisations that become direct working partners. This helped narrow the universe of potential stakeholders to those who were appropriate to target. Second, the concept of ‘progress markers’ made it clear change generally happens in small steps.

Together, these ideas helped shift the emerging approach away from one of planning with final impact indicators in mind, towards one of focusing first on the more immediate indicators with an emphasis on monitoring and feedback. The RAPID team began to consolidate ROMA into a series of steps, centred on the constant definition and redefinition of the long-term objectives of policy engagement. Tools for stakeholder identification, strategy development, monitoring and learning, communication and internal capacity supported these steps.

The team worked with a wide variety of organisations, ensuring ROMA carried on incorporating new tools and refining existing ones. As different people joined the team, ROMA expanded to include tools to help analyse the political context and improve research communications, theories of change and knowledge-brokering. A key thread throughout was the team’s attempts to better understand complexity and the challenges of working in complex environments. This underpinned what had been an essentially evolutionary approach.

At its heart, ROMA remains an analysis- and workshop-based technique that encourages feedback from teams working on very different issues and in very different contexts, and inspires experimentation with new techniques. Indeed, the process of writing this guide has helped the authors think more critically about what ROMA is and how to incorporate new issues and insights into the approach.

Many people have been involved in the process of developing and refining the RAPID Outcome Mapping Approach, from its genesis through to its current evolution almost 10 years later. Without the funding and long-term support provided by IDRC, this guide would not have become a reality. We are also indebted to the original IDRC research which developed the Outcome Mapping approach on which ROMA is based.

As former Director of ODI, Simon Maxwell initiated the work on bridging research and policy which grew into the RAPID programme. Many other members of the RAPID team have made invaluable contributions, including: Julius Court, Ingie Hovland, Jeff Knezovich, Enrique Mendizabal, Clara Richards and other past and current members of the team.

The UK Department of International Development funded much of the early research and many of the initial workshops through which ROMA evolved. We are also grateful to attendees at many RAPID workshops over the years, whose comments, questions and experiences helped craft ROMA into a practical tool.

We would like to thank our reviewers: Amy Etherington and Tricia Wind at IDRC; Chrisanta Muli at Oxfam Australia; Alison Misselhorn at the Health Economics and AIDS Research Division; Caroline Hoy at DFID; and Frauke de Weijer at ECDPM. Finally we would like to thank our editors, Anna Brown, Roo Griffiths and Jessica Sinclair Taylor for turning a large and occasionally unruly collection of experiences and ideas into a practical and readable guide, and Steven Dickie for working his magic on the design.

Also in this chapter: